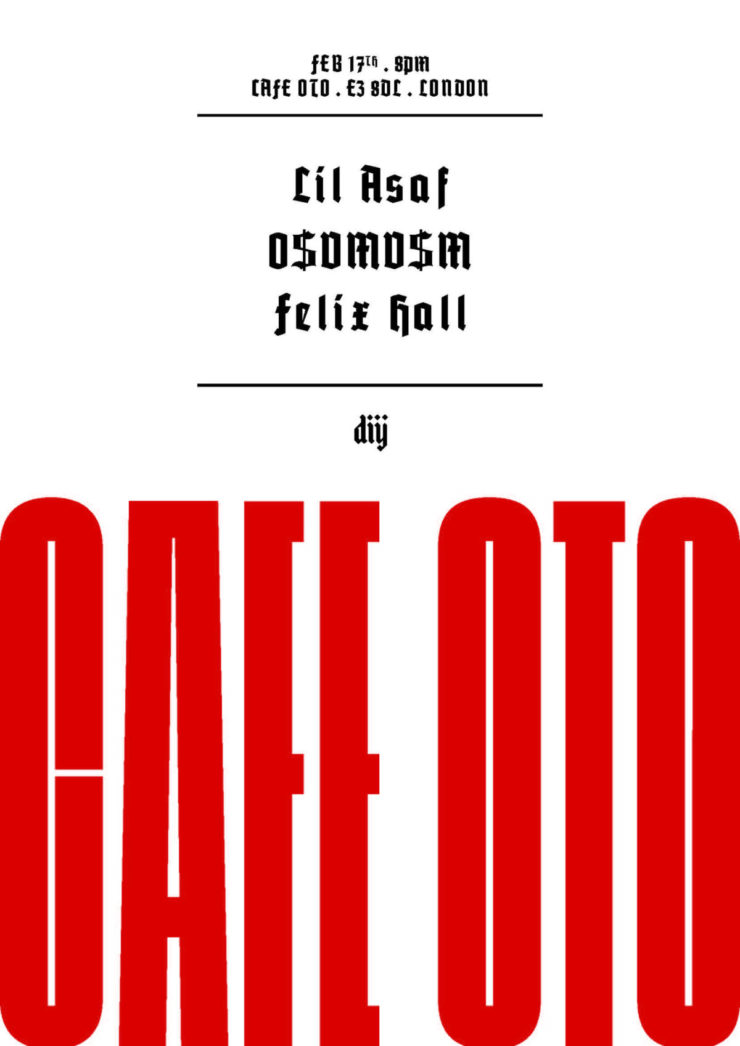 We regret to inform that diy at Cafe OTO has been rescheduled as Lil Asaf – Bashar – could not take his flight from Jordan to London due to visa issues at the British Embassy. diy are working on resolving and rescheduling the event to take place in March. Date TBA.

Lil Asaf is the alias of Bashar Suleiman a Jordanian-Palestinian producer and MC based in the city of Amman, Jordan. With a muffled rage and melancholy Lil Asaf’s flow resembles a magnetic and cavernous soliloquy. His lyricism guides deconstructed productions with industrial colours: a grime in Arabic, cracked by ambient flashes. Lil Asaf multiplies his collaborations in a forward-looking approach that federates the scenes and works towards their communitarian and social affirmation. Lil Asaf has an upcoming debut LP on CEASE 2 EXIST, and Single release with diy records expected soon.

Bristol-based duo O$VMV$M – consisting of Amos Childs of duo Jabu, and Sam Barrett a.k.a. Neek, who’s best known for his grime, dub and dancehall-tinged collaborations with Kahn. As O$VMV$M they produce sample based music woven together from B-movie horror films, old jungle/hardcore tapes and found/recorded sound. Heavily inspired by dub and its process of subtraction they often work backwards and strip away and warp elements until the original source material is barely recognisable.

DJ support from Felix Hall, label boss of CHROME. With an open ear to all eras and styles, the London-based NTS resident brings eclecticism and an element of surprise.

Tickets are available via Inverted Audio. If you require assistance with your purchase, contact Ticket Support.