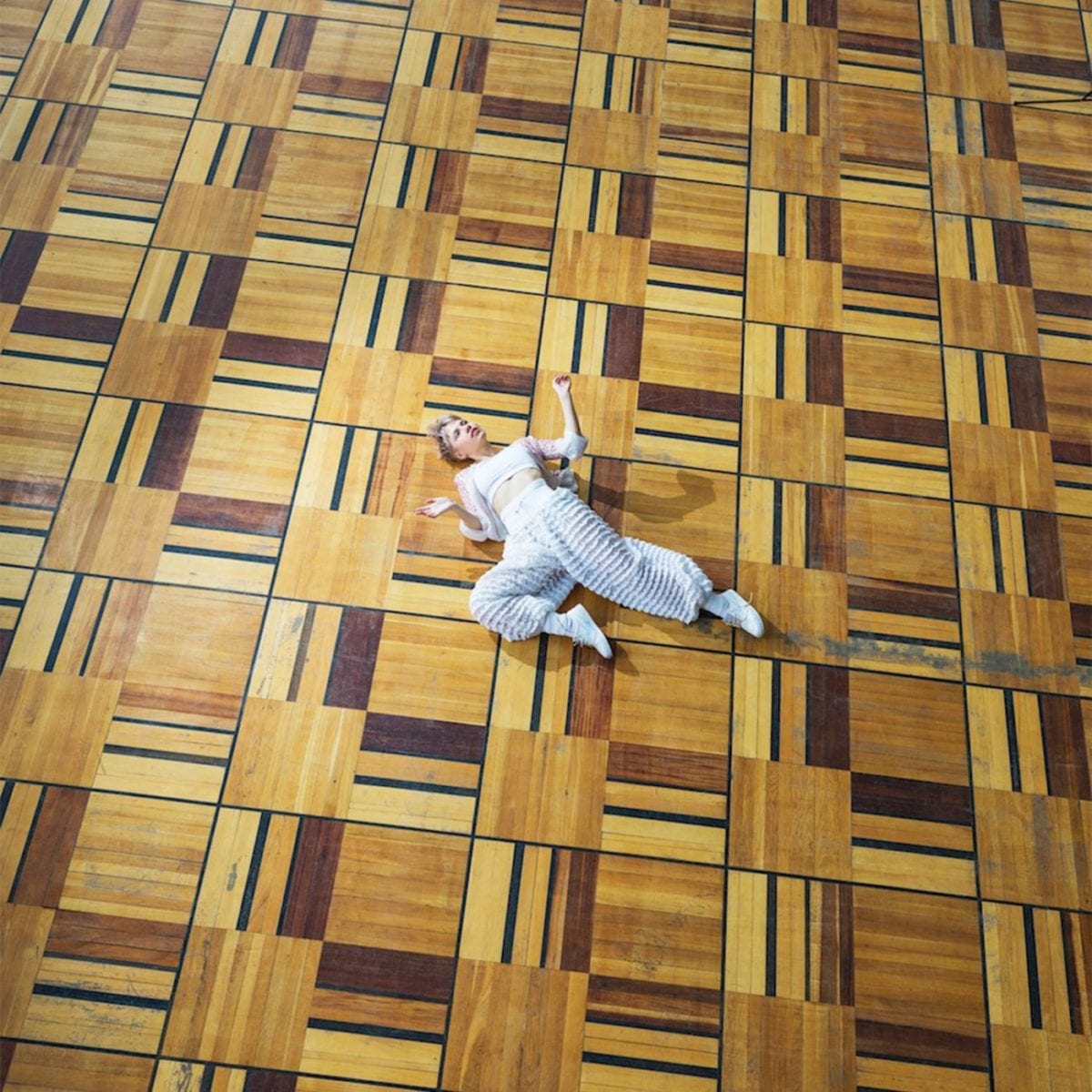 Following the recent release of для FOR on RVNG Intl, Kate NV has collaborated with visual artist Sasha Kulak on a short film to accompany the album. Inverted Audio caught up with her to learn about the process that brought the record to both wax and screen.

“I really feel that this music is like toy ambient. I imagine pencil drawings from the 60s,” Kate NV says over Skype.

“I have this wild connection with Moscow through the view from my window, with the weather, the leaves, the trees. At the same time, I had this feeling that everything is a cartoon or a picture. Everything is real and unreal at the same time. Each track is like a small cartoon for me.”

On для FOR, this sense of a soundtrack to both the real and unreal is felt throughout. The music is playful and melodic, but this shouldn’t be confused with simplicity or naivety. The intricate pulses and patterns of дуб OAK and двA TWO feel like minimalist miniatures, Steve Reich compositions compressed into a few minutes. вас YOU meanwhile, weaves human and digitally warped voices into a mystifying choral piece. Acoustic sounds are constantly played off against surreal synthesis.

Hearing Kate describe the recording process and her connection to her surroundings brings to mind Xavier de Maistre’s Voyage autour de ma chamber, (Voyage around my room). De Maistre found something fantastical in the mundane features of a room he had been confined to for six months, giving life to simple acts, gestures and furniture.

“[для FOR is) research of harmony of yourself, and the music you have inside yourself. Creating my own small universes inside this city.

“Those tracks just happened to me. I felt that I just came to my table and sat at my chair, and it all just happened somehow. I don’t even know how I made it. If I listen to this record right now I’d have no idea how I composed it”.

The melodies on the record often feel like sci-fi reworkings of folk tradition. Kate NV mentions a deep interest in Japanese culture, and a love for the new age compositions of Hiroshi Yoshimura. She’s recently become aware of connections between this and her childhood.

“I recently got asked about my use of the Pentatonic scale, and it made me think about why I love Japanese music so much,” she explains.

“I think the reason I can relate to it is I was born in Kazan [the capital of the Republic of Tatarstan]. It has a lot of music based on the Pentatonic scale. We studied a lot of this while I was at music school, the work of Tartar composers. I think everything in your childhood affects you in some way, and maybe that’s why I’m so interested in Japanese pop music. Because it’s kind of similar. It’s not very close in the way it sounds but they’re both very major key.

“Maybe that’s why I’m such a major key person and find it hard to make dark music.”

Kate NV’s deep fascination and sensitivity to her environment is clear throughout our conversation. We speak in the middle of the World Cup, on the day Russia are set to play Spain at Moscow’s Luzhniki Stadium. She is playing a gig that evening, yet still eager to venture into the centre of the city to soak up the carnival atmosphere. Listening to для FOR, you get the sense that Kate NV is trying to channel the energy she gets from the eccentric electricity of Moscow. Whether it’s the mismatched collage of architecture she can see from her apartment window, or the vibrant art scene.

“I think this album is tuned to how I feel about the city itself. It’d be different if I’d recorded it anywhere else.

“When you love someone or something, it’s always mistake. I love the city no matter what. The energy in Moscow is amazing. You feel so alive here despite all of the problems. The scene in Russia is very exciting right now. People really want to say something. Everyone is enthusiastic, they lots of ideas and they lots of things they want to say to the public.”

The collaboration with Sasha Kulak sees для FOR taken into an intriguing new direction. Kulak’s short film for the opening tracks of the album is an exercise in warping reality. Bending beyond all recognition the documentation of a daily routine. It reflects Kulak and NV’s shared interest in Moscow conceptual artist Viktor Pivovarov’s series of paintings, Projects for a Lonely Man.

“Pivovarov created his own world which is very familiar, with basic objects like a teapot, a glass of water or a table everyone had at that time. Regular objects, nothing special. But the way he painted his paintings was very abstract. Everything is so familiar but super different.

“Our [Kulak and NV’s] character wakes up, he does nothing special. He just goes to his table, eats and apple and reads a book. But we use this effect where parts of the picture are stretched, parts of his body or his arms and legs. It looks like an LSD trip.
“It’s interesting when reality becomes something else out of the blue. Everything is still the same, but different.”

Kate NV mentions a tactic used against supposed dissenters in Stalinist Russia, where agents would sneak into an apartment and make a minor change, something trivial like changing the order of books on a shelf. “You notice something you’ve remembered subconsciously is wrong, something has changed but you can’t tell what.”

Although working to vastly different ends, it’s a story that gives an insight into the disorientating effect the two are trying to conjure with the short films, and the border between reality and unreality для FOR inhabits musically and visually.

As well as the full-length version of the short film, an alternate experience of it is available on Kate NV’s website. Every time the button on the site is pressed, a different video clip from Kulak’s film is routinely but randomly generated.

для FOR is out now on RVNG Intl. in vinyl and digital formats. Order a copy from Bandcamp.