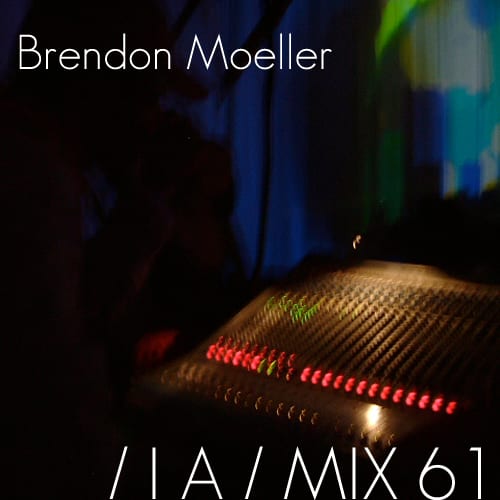 Brendon recorded the mix live in one take using Ableton Live, a Tempest drum machine, a UC33e controller and an iPad running an application called Bassline. His mix ventures deep within Steadfast’s discography, the track list itself is one to make anyone remotely interested in Dub Techno sit up and listen. Predominantly featuring tracks by Brendon Moeller as well as his various monikers, it also features remixes from Anton Zap, Sigha, Area aka m50 and Bear Weasel.

I’m originally from Johannesburg, South Africa and now live in upstate New York in a rural farming town called Patterson. I’m currently preparing to spend 2 months in Amsterdam while I do shows on the weekend throughout Europe.

You’re originally from South Africa. What determined you to relocate to New York City?

The desire to become an electronic music producer is the primary reason I left South Africa. Also didn’t help the then apartheid regime was after me for avoiding military service. Drum machines, samplers and synthesizers were simply not affordable to me in SA since at that time I was making a meagre existence as a remedial school teacher.

You’ve recorded a Steadfast retrospective mix for Inverted Audio – Please can you expand on the concept behind the mix and where / how you recorded it?

Well, the idea came to me soon after your request. I felt that now would be a good time for me to do it as I have sufficient releases under the belt to make it really great. I recorded it live in one take using Ableton Live, a Tempest drum machine, a UC33e controller and an iPad running an app called Bassline.

What determined the track selection and what overall atmosphere have you portrayed in the mix?

I guess I ended up choosing my personal favourites. I really wanted to give people the full spectrum of the Steadfast sound.

As technology continues to surpass everyday expectations how have you adopted these new technologies into your live performances and productions?

I’m quite thrilled at the available technologies since for the first time I am moving toward doing a live show and actually doing everything live, in real-time without relying on loops and pre-programmed sequences. Music is about jamming and much of the available hardware in the form of instruments and controllers are now truly facilitating the jam, MAN. ;-)

When was the last time you visited London? What do you envisage as the good / bad aspects about the city?

I visited London about a year ago, also for a show at Fabric. I always have a great time in London as the Fabric crew look after me very well. London’s diversity is the great aspect. The expensive rents and cost of living are the downside.

On Saturday 28th April you’re playing in room two at Fabric alongside Terry Francis and Steve Rachmad. What can people expect and look forward to from your live performance?

This will be the debut of my all new live show that incorporates all my new toys. You can expect some deep raw techno that will mostly be improvised on the spot and therefore be, like all my live performances from here on, exclusive to the audience there.

You’re based in New York City, how does New York’s electronic music scene compare to London / Europe? – Would you ever consider relocating to Europe?

New York currently has a thriving electronic music scene, as does London. It’s a great time to be a musician, wherever you are. I’m actually considering relocating to Europe, but need to make sure it makes sense as I have a wife and 2 small kids to consider. I’m eager to live in a country where social democratic safety nets for health care and education are in  place rather than the profit driven capitalist system currently in place in the US.

What / who was responsible for turning you onto dub?

I first became aware of dub when on a whim I purchased an LKJ album on vinyl back in Johannesburg, South Africa. The Orb’s “Adventures Beyond the Ultraworld” also got me intrigued by the dub production approach.

What other types of electronic music and producers were you into before you started to produce your own music?

Aphex Twin, FSOL, The Orb and tons of electronically produced hip hop and dance grooves that were permeating scenes everywhere.

You have a variety of monikers that you produce under, Beat Pharmacy, Echologist, Mono Blanco and Brendon Moeller, why do you have so many production names and what is your musical direction behind each one?

The monikers really were the result of labels I worked with wanting exclusivity. As far as there being a defined musical direction behind each, perhaps, but loosely so. Beat Pharmacy is the more organic dub and spacey stuff, Echologist is the deeper side of techno while Brendon Moeller aims more for dancefloor-centric house and techno. The Mono Blanco moniker is no longer in use.

When and how did you start working with the Chicago based producer Area aka m50? What was it about his music that you admired?

M50 began sending me demos when I was doing A&R for Francois K’s label, Wave Music. His sensibility immediately appealed as he comes at electronic music with a em indie feel to it.

What’s the story behind the coining of the name and logo of ‘Steadfast Recordings’?

The third Beat Pharmacy album was called “Steadfast.” The word really describes my approach to life and music, so decided to use it as a label name as well.

What’s your philosophy on sound design? Who / what has been the most inspirational influence on your method of production?

What forthcoming releases can we look forward to from yourself and Steadfast over the next year?

My new album on Speedy J’s Electric Deluxe imprint drops early May and the singles feature remixes from Ben Klock, Mike Parker, CV313, Jonas Kopp, Tommy Four Seven and more. Also, I have an Echologist track dropping on Echocord with a remix by Pole.