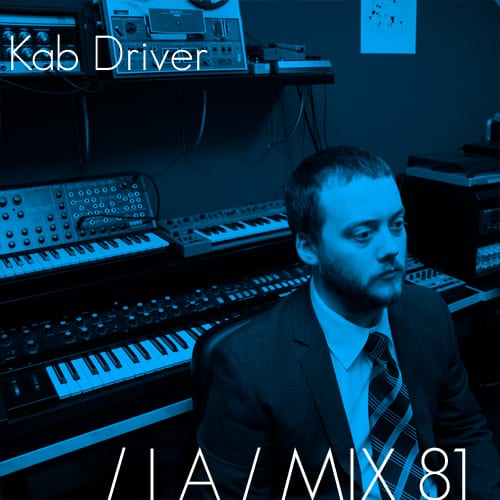 David Baxter aka. Kab Driver portrays the air of an educated and calculating individual in Irish electronic music circles. His dedication to providing a suitable platform for his sonic explorations, and those of his peers has led to the establishment of RESET, a well received club event that is quickly becoming a mecca for those looking to push the envelope, or soak up the new sounds of Belfast’s underground. Collaborating with the likes of Barry Lynn (Boxcutter, The Host) & Kaidi Tatham (Bugz in the Attic, 2000Black), David’s new album fuses elements of Funk, Soul and Electronica, drawing on influences from Curtis Mayfield to Daft Punk.

Kab Driver has put a truly eclectic mix together for Inverted Audio this week, passing through House, Mutant-Funk and finally rolling into a collection of totally exclusive Juke productions.

Hello, my name is David Baxter and I’m from Northern Ireland. I think I wanted to be a graphic artist before I got into music, some kind of computer based art.

Was music an influence on your life growing up? Can you remember any poignant moments?

Yeah definitely, it would probably be weird to get into making music if it wasn’t. My mum gave me her old record player and Michael Jackson‘s Thriller and Bad albums when I was in primary school, I think I can still recite most of the lyrics from Bad. A few other memorable moments were my brother lending me NIN the downward spiral, strutting around Lurgan with my friends blurting Herbie Hancock‘s Mr Hands out of our boombox, and getting wiped and listening for the first time to Aphex’s I care because you do (all of his records really) and Daft Punk’s Homework.

I got a guitar when I was really young but didn’t take a proper interest in until I tried making computer music. When I was 16 my big brother got a copy of Propellerhead Rebirth on floppy disk from a guy who lived above his flat, I became addicted pretty quickly. It taught me step sequencing, rhythm, basic synthesis and loads more. I used it along with a mini disc player for sampling and recording and sound forge to do really crude sequencing and FX. I’ve been studying, recording, performing and teaching music since basically.

It’s difficult to know how an audience perceives your music, as your own perception gets pretty warped if your working with material closely over a long time, but I tend not to really think about it, and only share it within close circles unless it’s being released.

Your music explores elements of Funk, Electronica and Soul music. What has attracted you to this peculiar palate of sounds and rhythms?

I don’t think it’s a peculiar palette to be honest, and electronica doesn’t really have a fixed palette, which is part of the reason why making electronic music is shit-loads of fun. It’s all dance music to me, artists like George Clinton, Sly, James Brown, Bill Withers, Marvin, Curtis… it’s a natural overlap into electronic music production, personally at least.

Could you tell us a bit about how you established the RESET events, and your perspective of electronic music in Northern Ireland?

RESET is a club night that myself, Defcon, Brian Greene (Kinnego Flux) and English musician Kaidi Tatham (Bugz in the Attic, 2000Black) have been collaborating on since last year. It started off as a bit of a jam experiment with instrumentation, electronics and vocals but we just launched as a label in September with Defcon’s debut EP.

Myself, Connor and Brian share a lot of the same influences and we wanted to create a base for ourselves really, and play together more often, but we were really fortunate to pull in Kaidi too. He moved over a few years ago and we’d met and I’d got some piano lessons off him, but the guy is a monster musician. There’ve been a few times where we’ve literally been gasping on stage as he’s been doing something like hammering out a flute solo with his left hand and playing 3 octave arpeggios on a polysynth with his right. He has perfect pitch too, the total shit!

There are lots of people making and playing out electronic music in Belfast which is great, a massive variety of nights dedicated to house, techno, bass music, hip hop, drum’n’bass, hardcore afrobeat, disco. The trouble is it’s a pretty small population and it can end up being pretty fragmented unless you’re a part of a mainstream club, some of the bigger clubs do get decent guests but the clubs themselves can often feel pretty hostile, for myself anyway.

Having right wing religious personnel in control of legislation that affects nightlife isn’t the most culturally progressive setup either. Anyway!! Lots of great artists like Defcon, house output from Ken & Ryu, Bicep, Cromby, grime from my neighbour Bloom and labels like Rudimentary, Acroplane, DSNT,  and Melted each doing their own thing.

Your debut album dropped on ‘Airflex Labs’ last month, would you like to discuss its content & musical persuasions?

It’s a fourteen track album that covers a variety of electronic music that I’m interested in, but I think there is some kind of overall soulful and funk vibe throughout it. Some of the tracks are from ideas started 2+ years ago and the most recent track on it is LTX. I do a lot of the vocals on it myself with various processing techniques but it also guests my pal Brian Greene on vox for a few, and my bro Barry Lynn as Boxcutter on the track Batteria. Batteria was originally called Batteria Acid and it used to have more 101 acid in it.

I think I wanted to just put together a lot of fun tunes interspersed with a few of my own but it went on a bit more of a journey than expected, I wanted to play a few faster jukey bits so I ended up putting that Watermelon man edit together especially for the mix. Also I guess, a good opportunity to show off a few of my friends trax like Real, Ken & Ryu, and that unreleased Host track still melts me every time I hear it too!

What are your instruments and software of choice when producing music? Could you talk us through your creative process?

I got my grades on electric bass but I’ve metaphorically hung it up to concentrate on keys, I play(ed) a bit of guitar and alto sax too. Software wise Cubase is my daddy sequencer, it’s the ultimate for me in terms of editing, MIDI and offline processing but I use Reason, less frequently now, for programming drums and some sampling. I’m starting to use Live more for production as the sampling functionality and general usability is pretty incredible and fast to use.

I also use a lot of the NI plugins and other DSP software. Hardware wise I use Korg and Roland monos and polys, a few drum machines, for fx I use a dsp4000, spring tanks, re-201 echo and some field recording equipment. I don’t really have a disciplined process but I think various things can act as a spring board, like noodling on a MIDI keyboard on a particular patch, a funny turn of phrase, or a weird sample. Or sometimes a purpose recorded set of audio for a particular project.

If you could only keep 3 albums what would they be?

What can we expect from ‘Kab Driver’ in the future? Any projects, collaborations, live shows in the works?

I have a lot of material finished since my LP so maybe get some of that out. I’m working on some new live ideas too but have been enjoying putting Dj sets together too. With Reset we have some great upcoming shows and releases in the pipeline but can’t say too much yet! There’s also be a remix EP of my album on Airflex, some pretty great producers involved so looking forward to that.

Do you find working with others beneficial to your own sonic journey?

It depends really, it can be amazing to share and bounce and even argue over ideas to refine something, but just like working solo you can end up going on a tangent of bullshit. It’s different with different people too, myself and Barry follow up about 1 out of ten things we start as hardware jams, with Connor so far it’s just been about making a racket and having craic, and with Kaidi it’s like sit him down and quickly capture a rapid stream of madness funking out of his fingers. With Brian it can be pretty exciting the way we’ve collaborated recently as we’re doing it remotely, i send him some bars and he sends back an acappella, it’s always fun to hear that as you don’t know what to expect.

Lets have an insight into what your listening to at the moment?

Most most recently I’ve been revisiting Dizzee Rascal – Boy In Da Corner, Roy Ayers – Red, Black and Green, Belfast pal and producer T-Polar – Archean EP, Wayne Shorter – Speak no evil and the music from Items who is releasing the next Airflex record, seriously sick stuff !

I keep going back to Traxman’s LP and Machinedrums Rooms LP too.

What do you enjoy doing when you’re not slaving over hardware, or grafting beats?

Blowing shit up on my PS3, reading and cooking. I’m also quite into animation using After Effects and CInema 4d, I try not to get too caught up in it though as it can be a pretty intensive hobby. It’s so fascinating though, and I think technically there’s a lot of crossover with musical software.

Eat plenty of fresh fruit and vegetables, don’t be a cunt, love and be loved.