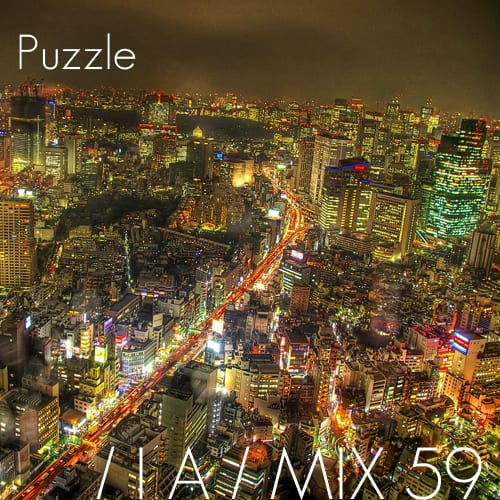 Peter Puzzle is a member of the Leisure System collective based in Berlin. Hosted and run by DJ N>E>D, Barker, Puzzle, & Area Boy, Leisure System operates as a record label, events promoter and as a resident night at Berghain. Peter regularly plays at Leisure System parties and has supported the likes of Machinedrum, Lazer Sword, Jacques Greene and most recently Jimmy Edgar in Moscow. Upon returning from Moscow Peter got in touch with us to record a mix before setting off on the Laurel Halo European tour.

In his mix Peter delves deep within his music library bringing to surface some of our favourite records from the past year, featuring a choice selection of tracks from Oneohtrix Point Never, Laurel Halo, Clams Casino, Dam Mantle, Actress and Hype Williams he’s also squeezed in some unreleased gems.

Puzzle’s mix aims to be a soundtrack for a ‘vast futuristic utopia metropolis’, something that has become an integral theme in his life. He’s aptly named the mix ‘Synaptic City’.

Please can you introduce yourself, tell us where you’re from and explain the coining behind the name ‘Puzzle’?

I’m originally from Sweden but I grew up all over Europe, Zurich, Amsterdam, Stockholm, Copenhagen, Aarhus, and now Berlin.

I chose the name Puzzle as it fits my production and DJ style. I’m always looking for exciting new stuff, trying to challenge myself and listeners.

Before settling down at Leisure System you studied at the Royal Academy of Music in Aarhus – How was this for you, did you achieve everything you wanted to?

It was awesome, everyday I simply learnt something I really wanted to know and was extremely useful. That’s what true education can be, and I feel very privileged to have been able to attend such a prestigious school, and now I have a masters degree in electronic music.. bujah!

Please can you expand on the mix you’ve recorded for IA, how did you go about creating the mix and selecting its track list and have you laid down a specific atmosphere within the mix?

For me the mix definitely has a certain sound atmosphere. It’s of this vast futuristic utopia metropolis, this has always been a theme in my life, being a big city kid and growing up with ghost in the shell etc, it still has a very central role in most my aesthetic tastes, be it music, movies, fashion, or art.

What’s the story behind the mix’s name ‘Synaptic City’?

Well the tour is rather extensive, with a lot of bigger cities so that’s very one to one, but then again its more about how this construct is more of the mind than based in actually reality.

I was quite quickly drawn to the alien nature of electronic sounds, my mom has mentioned how much I loved the sound EFX when watching Transformer cartoons as a kid. I think that’s where it all started really, then when I heard Autechre, and Aphex Twin for the first time in the late 90’s there was no looking back.

You frequently DJ at Leisure System parties and have played alongside Jacques Greene, Machinedrum, Jimmy Edgar and Lazer Sword. Do you have any plans to release music on Leisure System or any other labels in the near future?

Always working on stuff, but nothing concrete right now.

When you play out what does your set up consist of?

I go from ambient to footwork, I like mixing a lot of varieties of music and I always play to a specific place and crowd.

What do you have planned for the summer and for the rest of 2012?

2012 is mental for me! A few weeks ago I played at Leisure System’s party in Moscow. Now we’ve got Vienna and Stockholm in the works. Berlin of course. Then its the Laurel Halo tour, Lisbon, Guimarães, Paris, Glasgow, Manchester, London, Liverpool, Stockholm, Copenhagen, Berlin, Luzern, Moscow, St. Petersburg, Madrid, Barcelona and Amsterdam. Then I’ve got a small Asia run coming up, Shanghai, Manila, Tokyo. Then Bloc festival in London and the Leisure System stage at Dimensions Croatia. So lots of lovely stuff to look forward to!