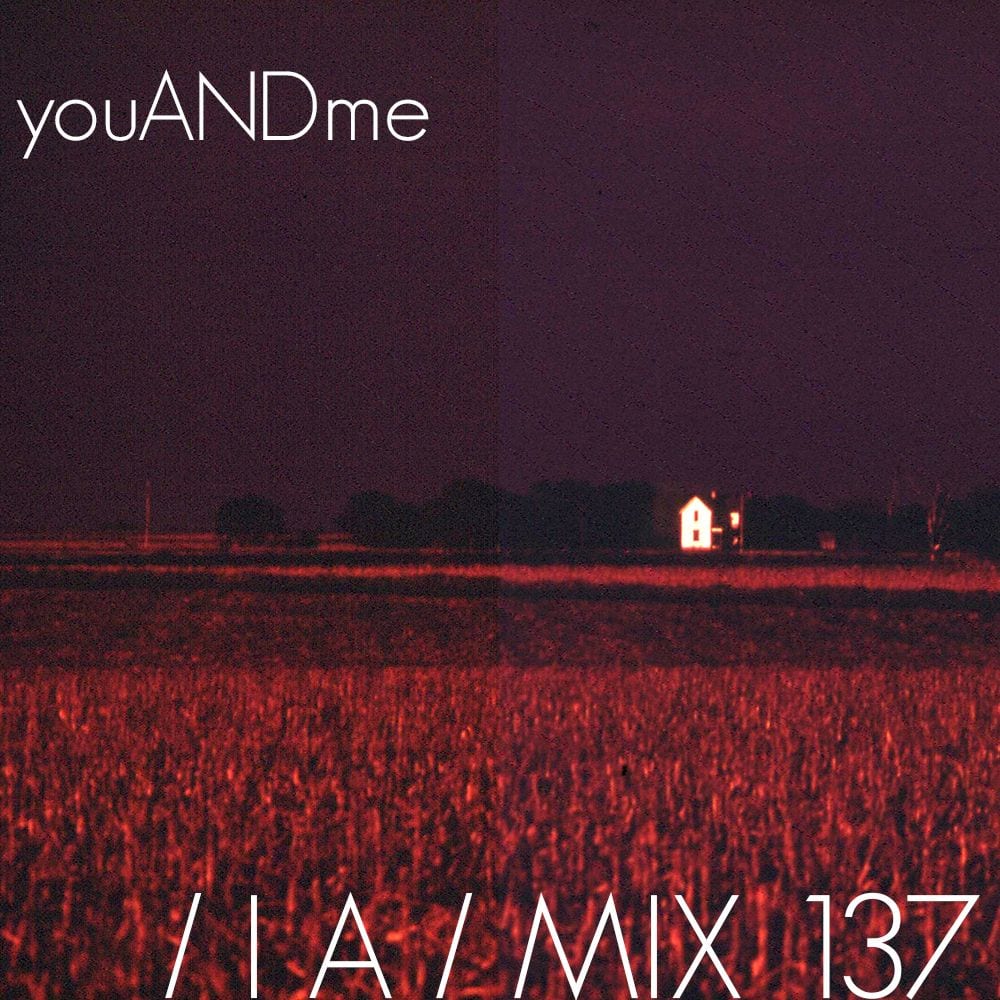 youANDme are a Berlin based production duo made up of Daniel Ströter and Martin Müller. They’ve been producing together for the past 15 years and have remixed the likes of Moodymann, Radio Slave, Seth Troxler, Lawrence and many others. In June 2013 Martin Müller released his first solo album “Behind” through the Ornaments imprint, a year later he returns with “Behind LP Reshaped” an opulent collection of edits, interpretations and remixes featuring XDB, Freund der Familie, Marko Furstenberg & Luke Hess, Basic Soul Unit, Matthew Herbert, Legowelt and many more. To celebrate the release we invited Martin to record a two hour dub techno mix, plus compile his top 10 dub techno tracks.

Hi Martin, thanks for recording this stunning dub techno mix for Inverted Audio. Could you start off by telling us a bit more about the mix, how it was made, your track selection as well as your adoration for dub techno?

I recorded this mix live at Studio R in Berlin. It’s a nice and dark studio which has a good sound system in the basement of the club. There is a smokey, dubby vibe going on and you have no neighbours complaining about the loudness of the bass. For example the guy above my flat start to jump like hell when I put the music on at home. No idea if he’s dancing though maybe he really loves my beats or maybe he hates it!

The set is a little bit deeper than our normal club sets. I selected some of my all-time favourite dub-techno records and also some new stuff like the remix of Marko Fuerstenberg & Luke Hess (under their new moniker DUEL) for my album the track I produced called “The Veil” feat. Keter Darker.

My love for dub-inspired stuff came from the first Rhythm & Sound records which are produced by Mark Ernestus and Moritz von Oswald. I also used some music from these two innovators in the mix.

How did you meet co-producer Daniel Ströter? What was it that provoked you to start making music together?

We met 15 years ago in our old hometown. I was a DJ and Daniel had a groovebox and this is when we tried to produce our first tracks. We taught each other and Daniel began to buy records and I started to buy my first analogue gear.

When we moved to Berlin we shared a flat with 2 studios for more then 10 years. Our early influences came from a club in Kassel / Germany which was called “Stammheim”. They had a really amazing techno floor where great artists played every weekend with highlights such as Jeff Mills, Christian Vogel, Pierre, Super Collider LIVE, Matthew Herbert, Sven Väth, Claude Young, Ben Sims, Derrick May and much more.

As a production duo how do the two of you balance the work load? Do you operate together as one, or does the other play a specific role in the music making process?

Each of us have our own studio nowadays. We send our ideas through Skype and talk about it, or we meet up to finish a track. Both our studios have similar gear so it’s really easy to get the right workflow in both studios so we can jam effectively with the machines.

Tell me about your personal musical heritage. What’s your first memory of music and what did you grow up listening to?

That’s a good question. If I think back to the earliest music I can remember the first thing would be Michael Jackson and his album “Thriller”. My favourite tracks were “Billie Jean” and “Beat It” because both are so funky and have these great basslines.

I was born and raised in East Germany and when the wall came down I was 8 years old. It was really hard to get music from the West but Michael Jackson was one of the few pop-stars which we had on vinyl and tape. Later I got my first techno and house lessons from a radio show called “Clubnight” where great DJs like Sven Väth or Pierre played regular. I was living in a small village in the countryside and the radio show was the only possibility to discover new and fresh sounds. It was the early nineties and there was no internet with Soundcloud etc. The only chance was to record everything on tape and listen to it again and again.

You’ve also worked a lot of remixes for the likes of Moodymann, Radio Slave, Seth Troxler, Lawrence, Brothers Vibe, Robert Owens, Timo Maas, Paul Johnson, Mark Broom, Kollektiv Turmstrasse, Johannes Heil, Florian Meindl, Pascal Feos or Pirupa. Can you divulge your approach to the art of remixing, what’s your process and have you discovered a tried and tested formula?

Its always fun to do remixes and edits because you can learn a lot if you listen carefully. It’s nice to see how other producers work too. If we do a remix then there has to be at least three or four really good elements or a great vocal which catches us. We always try not to use a typical formula in our productions to keep things more interesting. Maybe it’s easier to copy a successful formula again and again but this would be to boring for us.

The last remix we did for Steve Bug called ‘Pelican Glide‘ and it will be released this month as Pokerflat 150. He had some amazing synths inside and it was so much fun to built up our stuff around it.

How did you get involved with the record label Ornaments?

Ornaments is a small group of friends and music lovers and we are involved from the beginning. They try to keep alive the spirit of deep music and vinyl culture apart the newest trends and hypes. I like this attitude a lot.

You recently released a remix compilation called youAND:THEMACHINES featuring a choice selection of remixes such as XDB, Freund der Familie, Marko Fürstenberg & Luke Hess, Rising Sun, Matthew Herbert, Legowelt and many many more. For how long has this compilation been in the works and what is the context behind the compilation?

It was back in June 2013 that my first solo album “Behind” was released through Ornaments. I had a wish that there would be a remix of each album track and now a year on, this remix album is called “Behind LP Reshaped“. It’s an opulent collection of edits, interpretations and remixes. The release is out now and I’m really happy with the result.

It was a lot of work to finish this album because it comes with handmade packaging. I painted every album cover, all hand-painted on limited vinyl and also on the tape edition. It took more then 2 months and this much work is the reason to limit the vinyl edition to a special number of 333 and the tape edition to 150.

I dedicated the same effort for the original album last year with black colour on a white background and now it’s inverted with white colour on a black background. For me it’s the perfect way to close the story of my first solo album project and I think to invest so much work into the packaging makes the album a little bit more personal and it’s something you can’t download in the digital age.

What was your selection process in acquiring artists to create remixes for the compilation? Was it a case of asking friends, or are there artists you’ve never met in person featured on the compilation?

I’m really thankful that so many of my favourite artists did rework an album track. Some guys are good friends of mine and I love their stuff and some guys are producers who have inspired me to make my own music.

Being based in Berlin, which other musicians do you tend to hang out with the most?

I spend a lot of time with Michal (aka The Analog Roland Orchestra) and Marco (aka Rhauder). We share the same love for gear and its always interesting to talk about the newest stuff, tips & tricks. It’s also nice to hang out with friends outside of the music scene to participate to other aspects of life.

Tell me about your studio, your setup, secret weapons for producing particular sounds and any other out-there instruments.

Most of the times I use the computer only as a recording device. I record long takes of my outboard gear and then I cut the best parts and arrange it in the DAW. I know it’s really nerdy and maybe you could do the same with software but I think the interaction with a machine is different. You come up with ideas faster and you get a more human touch if you play everything in realtime. I like to work in this way. Some of my favourite gear is the Jupiter 6, Moog Voyager, Alpha Juno 2, Prophet 12, Tempest and the newest member in the family is the MFB Tanzbär.

Are your productions influenced by particular environments, life experiences or travels?

Everything that surrounds you can stimulate your thoughts and your music. For me the biggest inspiration is to travel and to discover many different cultures. I love art, nature, good food, to read books, to go to concerts and to listen to other music than house and techno. I think if you keep your mind wide open for new things it will be a great inspiration for your productions.
One of my dreams is to produce an ambient album in a small lonely house on the beach of the Baltic Sea during the autumn months. It would be great to look out of the window and see the stormy sea and catch this mood in the music. It’s just a dream but I hope one day it will be true.

What are your plans for the rest of the year? Any more releases scheduled, tours, gigs in London etc?

At the moment we are working on some new EPs and I finished some new youANDme remixes which will be out soon. There are also a lot of club and festival gigs during the summer. Hopefully we will have the possibility to play again in London because it’s one of our favourite cities in Europe.

Finally any words of wisdom you’d like to depart with?

I don’t know if I have real words of wisdom but i’m really thankful that I could do what I love and I hope I can continue this way as long as possible. Thanks to all who support our music!

Going back to dub techno, what are your top 10 dub (-techno) tracks of all time?

In no particular order:

Discover more about youANDme and Ornaments on Inverted Audio.