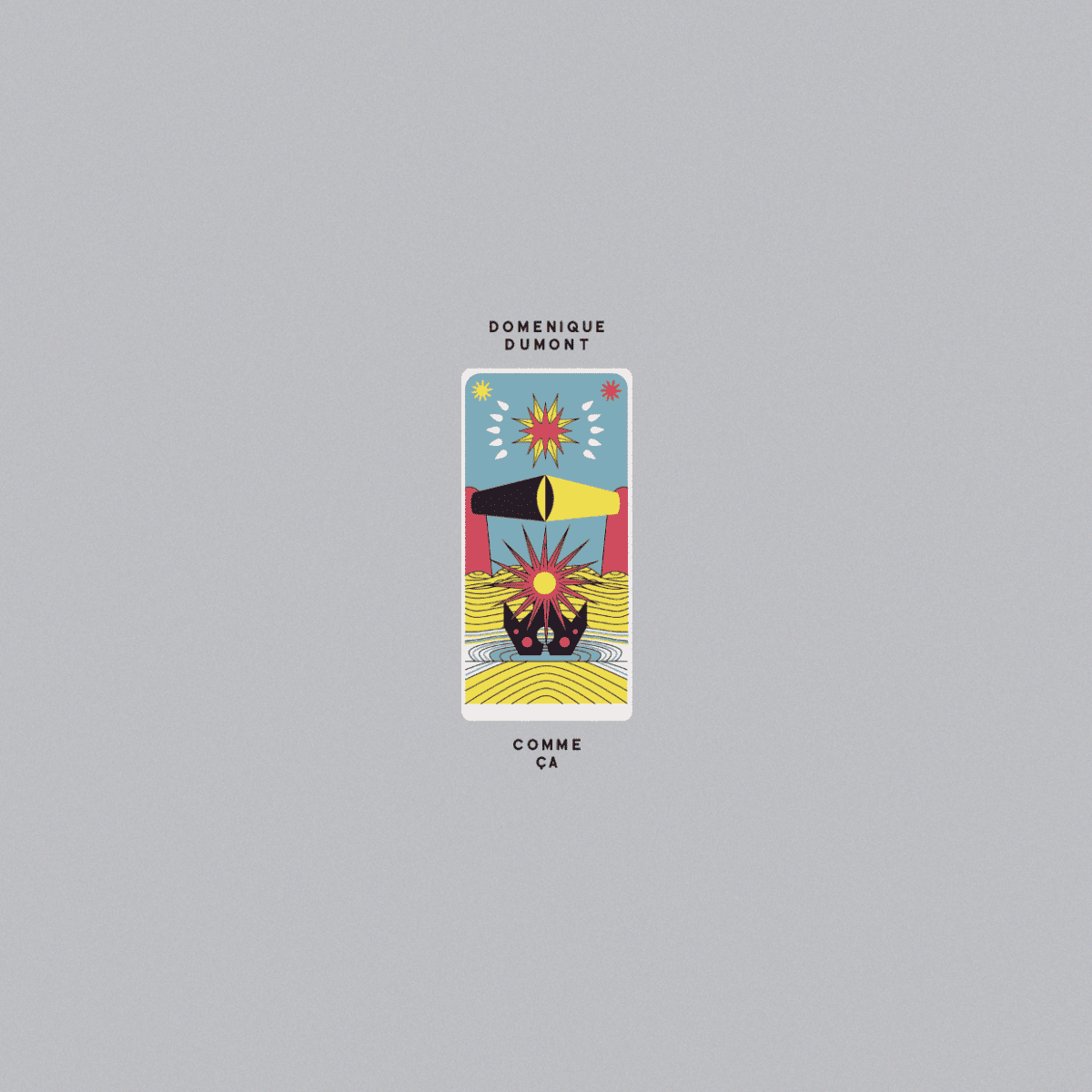 When summer arrives, one is always looking for the right soundtrack that would give its tempo to these long and warm days, the music that would turn these moments spent staring at the indistinguishable blueness, feet deeply buried in the sand, into the beautiful memories that bolster you when the mood gives out. Domenique Dumont’s LP Comme Ça might well be what you need and what you don’t know you need yet, but still very much needed…Crystal clear, right?

Fresh and sweet like sorbet melting under reverberated heat and ultraviolet rays, this six-track LP reels off a string of gracefully-crafted synth-pop ballads that make for a particularly charming strip of brightly hued lights.

Who’s hiding behind the mask of Domenique Dumont? Nobody knows. One thing is sure though, this debut album offers a truly rejoicing imaginarium where doing stupid dance moves and watching Godard films while sipping almond syrup would be the only rules.

Framing more or less languid dynamics and ambiences, the mysterious producer generates a fully homogenous and out-of-time sound sequence, deftly digressing from the well-known territories of casual electro-pop melodies to develop its own bubble of fragile and visually evocative sounds.

On Comme Ça, French-speaking mumbling vocals – like deliberately re-arranged puzzle pieces in reverse – seem to merge from inside a mist-shrouded furnace of FX-infused sound bits and caribbean percussions where only the title of the track itself manages to makes its way to our ears. Subtle claps come and go like a warm sea’s lapping and chromatic pads then definitely achieve taking the track to tropicalised, dreamy spheres.

As stretchy and softly bouncy as it feels brittle at times, the album knows another of its climaxes with L’Esprit de L’Escalier – literally The Spirit of the Staircase – an electro groover that ups the tempo while adding an irresistible twist of ’60s pop and neo-surf over its rolling bass billows and exhilarating guitar lead. Lacing up xylo-laden drum works and a lush mesh of savanna-like samples, La Basse et Les Shakers sounds like the perfect mix between Francis Bebey’s re-interpreted African folk and more dancefloor-friendly rhythms.

All three tracks of the flip side then give vent to Dumont’s sound experimentations through instrumental-only pieces, Un Jour Avec Yusef being the most exploratory of the batch. Despite its title, La Bataille de Neige – The Snow Battle – doesn’t stray from the general atmosphere and delivers something closer to a baked jaunt through warm subaquatic reliefs. Somewhere in the vein of Augustus Pablo’s high-on-pot delicacies and that of a distorted barrel organ’s harmonics, the track feels like the perfect companion to our dawn-to-dark sun-basking.

Le Chateau de Corail closes the LP on an even more evanescent touch. Out-of-tune piano keys delicately drop over a fluttering dusty melody in almost suspended motion. The air is so shivery and subtly-balanced that the movement feels on the verge of collapsing with every further note being played. Airily encapsulating the seasonal frivolity as much as its melodiousness feels enduring, the cocktail of freshness and naiveté of Domenique Dumont’s Comme Ça makes for the exact type of album that you’ll keep getting back out for your own pleasure and share around like a little personal treasure that only the most deserving should know about.

Comme Ça is out now on Antinote, order a vinyl copy from their web-store.

Discover more about Domenique Dumont and Antinote on Inverted Audio.