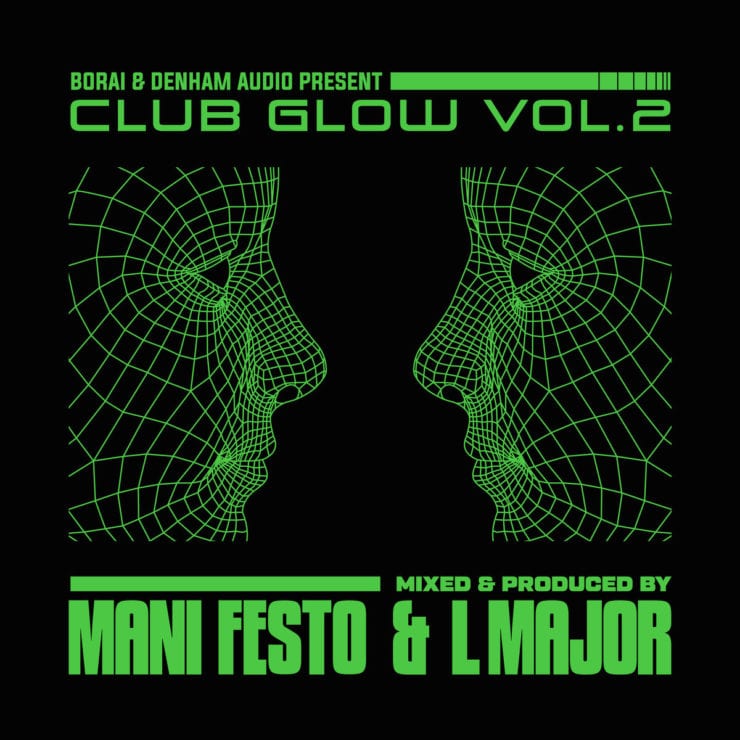 Club Glow’s doors opened a whole year back, with label masters Borai and Denham Audio releasing Vol.1 to raucous acclaim, thanks in large part to singalong yet tuff-as-fuck single “Make Me“, which saw a full vinyl release just recently and featured heavily in Peach and DJ Seinfeld sets.

Featuring diced-up samples of rave classics rehashed for the world as it is 20 years later (see ‘Forget the World‘), Club Glow struck a chord with hardened pro’s and greenback newcomers alike for the tenacity of the beats, the hardcore nostalgia revived, and the slick 90’s phosphorescent presentation — courtesy of Mani Festo.

Now, Borai & Denham Audio crack open the neon “Club Glow” tin for the sophomore release on their label dedicated to reimagining the sights and sounds of classic UK Warehouse/Rave music. This time the Club’s resident artist Mani Festo and label family LMajor turn in a full albums-worth of material each, burning up each side of the tape with the same energy as that which set the debut on fire.

Those returning to the fold will be glad that the formula has remained the same — rough and ready breakbeats meets 90’s warehouse hysteria and wrapped up in a glow-in-the-dark bow. This time it’s label friends and family Mani Festo and LMajor turning up for the baddest face-to-face/B2B on tape today.

The release is fully digital, with a grand total of 28 tracks and DJ tools for Bandcamp purchasers, but the full joy is found in the elusive cassette’s continuous mixes.

Mani Festo’s A-Side initially sits on the fence between dark and dingy techno (Gravity Shift) and colour-streaked breakbeat. The very nature of the music and the illuminated rave scenes naturally conjure many highlights, but standouts include ‘Looking for a Meaning‘ and ‘Journey to the Centre‘, before the circa 130 BPM gives way to pressure point hitting junglist/DnB over the remaining tracks in a furious send-off.

LMajor answers on the flip with scuffed-up breaks and the UK-Bass madness of ‘Decode‘ and ‘A Lesson from Rupert‘; 2-step garage clashing with wind-tunnel bass oscillations and clamouring drum hits, rave horns and dub sirens. The B-side brings its fair share of switch-ups, the pace only one step ahead of the climbing rave nostalgia. Dripping through acid-inflected side steppers (BH05 067) to the grimey ‘Switch‘ and on to the colossal and constant build of ‘It’s Raw‘, LMajor keeps us dancing lightfoot-stylee on our aching toes right up until the heart-palpitating end of ‘Wow Sound‘.

There’s a lot to rave about in Club Glow, but perhaps the greatest element is the fact that the incredible work within is so authentically original: yes, it hearkens back to a by-gone golden age, and absolutely this is where the magic is drawn from, but within the hardcore continuum it is undeniably placed on the dot of 2019. It is nostalgic music and art but with a twist of humour in the glow-stick freebies and the neon flyers.

There’s a lot to be said for a label who can reproduce the classic emotions and call on the beloved touchstones of a now distant era of dance music without simply churning out repetitive material. Borai and Denham Audio passed the test on the debut, and LMajor and Mani Festo, having run the gamut, find themselves safe and sound in the golden warehouse rave on the other side.

Club Glow’s 2nd cassette has already been released, but the full release can be purchased via Bandcamp. Additionally ‘Make Me’ has just hit shelves — beat the hype and grab your copy from the usual suspects before it’s all gone.

A Side: Mani Festo