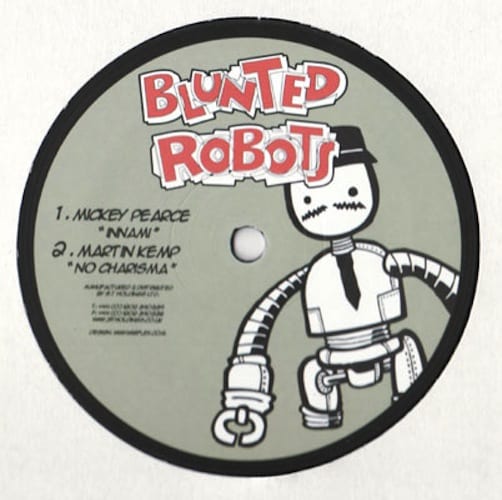 This first release from new label Blunted Robots really is something special: two completely destructive UK funky tunes from two of the most exciting and different up and coming producers around. The proceedings start with Mickey Pearce’s “Innami”, a tune that is, in my opinion, the most accomplished vocal track to emerge from this fleldging scene to date. The vocals are, essentially, a homage to ragga and dancehall MC chat and, although I am unsure as to whether Pearce, himself, provided the vocals, they are delivered at a furious pace with boundless energy. Place this over the top of a complex percussive workout and an awesomely squashed bassline and you have no excuse not to be up on the dancefloor losing it.

Martin Kemp steps up with “No Charisma” on the flip and, despite what you might think from the name, no, its not Spandau Ballet deciding to take a shot at UKF. Martin Kemp is actually the younger brother of producer and dj of the moment, Brackles (check his recent output on the Applepips imprint if you don’t believe us). This tune is worlds apart from “Innami” and it has a more withdrawn, nervous sound to it. The thing that makes this track a standout is the melody line of the lead synth. It gets into your head and under your skin in the best possible ways. The broken beat drums create a groove that locks you into the track and the synths do the rest. However, despite its relatively downtempo vibe, it is still wrecks havoc in the dance and, like “Innami”, it’s a wonderful piece of music.

Both of these tracks have had massive DJ support from Ben UFO, Cooly G, Brackles, Ramadanman and a whole host of others and this release suggests that there are great things to come from these two producers. On top of this, from what I’ve heard, Blunted Robots have some pretty exciting stuff lined up and they look set to become of the labels to watch for the rest of 2009. One thing is certain, we’re keeping our eyes peeled.