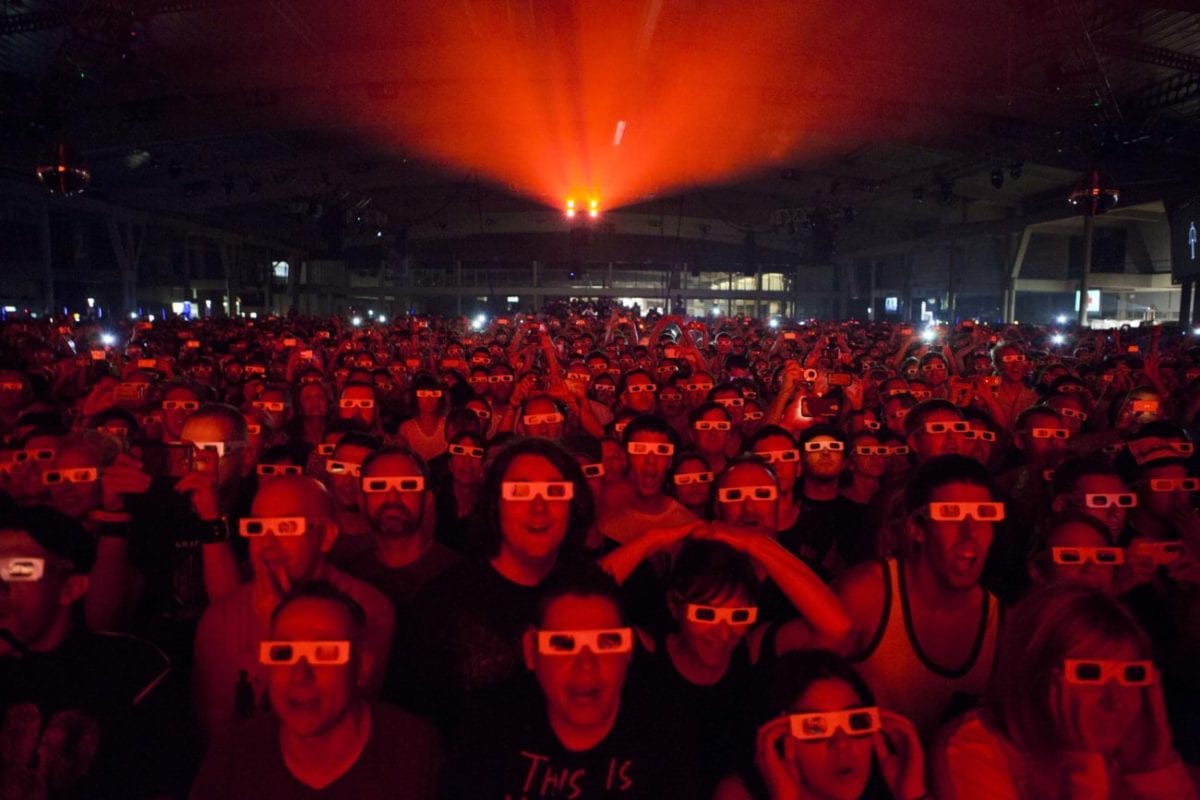 Either if you’re a new comer or a religious follower, Sonar is the jewel in the crown for electronic music festivals. Over the past twenty years Sonar has pioneered the very best talent in the electronic music community. As a brand Sonar has expanded its presence across the globe to an array of urban locations including Buenos Aires, Sao Paulo, Chicago, Tokyo, London and many more. Sonar is without doubt ‘the’ most ambitious and well-organised music festival there is on the festival circuit.

Georgia Taglietti is Head of Communication and International Media & Press at Sonar and is one of the key people in the organisation of the festival. She’s an extraordinary professional and incredible woman, she’s been a great representative of Sonar since it all started back in 1994. We sat down with Georgia to discuss her experience of Sonar over the past two decades and she shares some of her most treasured moments and experiences of the festival.

You’ve been involved since 1994 in the festival. Many situations and so much music. What makes the festival more exciting on the 20th anniversary?

What makes it more exciting to me this year, is that we’re changing venue for the daytime and this is probably the biggest choice and challenge. We haven’t had this since 2001, when we first changed the night venue into the venue that you know now, which is Fira Montjuic in Plaza Espanya- city centre but completely different building. Very much open to light, really different than before. I feel like someone that’s moving house for the first time after many years and has to kind of re-decorate the house, a very beautiful feeling of re-setting, cleaning the past and watch into the future again.

Why did you have to change the venue after so many years based in CCCB? Is there more demand for the audience to attend Sonar by day? Is it because it was always sold out in the past few years right or did you all just want a change for the 20 years celebrations?

It’s actually a mix of the two. The most essential one is that we wanted to offer a much more comfortable experience of living Sonar by day, as it was always limited by the capacity of the two venues that we’ve been hosting it to. We’ve spent a year before the anniversary started in order to think if we could actually move, asking everybody if they would be happy with the move. It’s been a kind of horizontal democratic choice to us. We felt that we needed to have more space in all senses. We needed some kind of improvement in the production and this couldn’t be done within the venue that we’ve been before.

Could you share some of the performances we shouldn’t miss this year in your opinion?

Well, I would choose different things. I really like the fact that we have Francesco Tristano again for example. I could mix classics with non classics. We have artists that have already been to Sonar which I always want to see like Tristano, Matthew Herbert, Jamie Lidell. A fantastic DJ set by Modeselektor only by day, which will give a completely different feeling of how we perceive Modeselektor, as they are normally night venue artists. I want to see Laurent Garnier, Maya Jane Coles, sounds that they’ve already been invited to Sonar but they are always artists that I’m really looking forward to listen to again.

There’s many new stuff I’ve never seen before and would love to check, very different things like; The Quayola‘s installations in MANC-the Museum of National Art of Catalunya -I think this will be fantastic. The Olafur Arnalds Trio because we’ve been doing Sonar in Iceland, in Reykjavik, we’re going back in 2014 and I think he’s a fantastic performer. Dinos Chapman, in Sonar Complex by day, which I think it’s going to be super interesting, as he is also doing something special with his tracks and videos he created for his track-in Sonar Cinema. I think another thing that’s personal is to check again Oneman because I like his DJ set. And of course Kraftwerk.

Could you share some more information about Sonar+D, that was also launched for the first time this year?

Sonar+ D is actually an upgrade of what Sonar Pro, Sonar Matica and Sonarama have been through the years- you’ve lived those 3 areas yourself Nina.

Palau de Congressos is the space that we’re hosting it, near the new Sonar venue. I think we’ve found a great place to produce this mix and upgrade of this area. Here is what everything will be taking place into different levels and there will be installations, a Market Lab, the App Bar (a bar of applications), the Hands On Area, where people can see the actual demo side of it and installations such as Skrillex variations.

Does it annoy you that people don’t see all the diversity and variety of the festival and they only focus on the fact that in the past few years, you’ve been also booking artists that are more mainstream let’s say?

Those are the people that are driven by headliners, other ones are more surprisingly open when they come maybe because they don’t know much apart of those names but they come anyway. For example the double bill of Skrillex and Kraftwerk has a sense for us, because we think that people that are not coming from the generation of Kraftwerk and are in the generation of Skrillex, will find out what Kraftwek are, they’ll understand more about the history of electronic music. I think headliners’ names are the ones that catch the attention at first, but you need to stroll by and listen to all. I’m not annoyed by this, I have a way of understanding and seeing it.

There’s people that know everything and people that know only the headliners and this is not their fault, it’s the fault of media of course. The main media don’t really talk about smaller names, they don’t give them enough promotion. It’s how the music is promoted online and off line that makes the headliners what they are. Basically, we just want Sonar being the real headliner so can people can discover things that are interesting to them to discover. I think when they come and see Chromatics for example, they will discover other little shows, find out about Catalan music, what Spanish artists are doing, RBMA etc. Names are just lights that attract people that don’t know much, but then they get in the Sonar space and they just get more open.

This is what Sonar is about anyway. New artists, advanced music and multimedia arts. You still promote all those new acts…

Headliners, as most of the people well known in the scene, always add their testimonials and they become involved in other activities-like Richie Hawtin and Skrillex become involved in big music technology discussions. I think this broad participation of artists in Sonar+D activities also gives a good focus on what Sonar this year will be like.

If you were to pick some of the music experiences you’ve been having for all these years, could you share some with us?

There’s several ones that I remember. The first time that I ever worked for Sonar I didn’t work in music, I didn’t know anything about electronic music; I came from a jazz background. I was taken out of Sonar by one of the Sonar Pro directors to one of the very first gigs of Laurent Garnier, outside Sonar but in Barcelona in 1995. That was when everything started for me. I really literally understood what I was working for, the sounds and the people. That for me is a milestone.

I remember Jimmy Tenor on a horse, getting inside the tent at Sonar Park near the beach in Marbella (the previous night venue). The whole thing about the Hamlet helmets and Daft Punk back in 1997. It was the big Daft Punk moment, they were already well known but nobody knew who they were.These were situations that were quite surprising at that moment, because apart from the people that we already knew in electronica, we never got accustomed to those kind of special moments…

Another moment that has been very historical is when we moved in the new night venue and everybody criticised us. Everybody told us there’s no sea, this is not good, this is very dark, this is very industrial.

And then after that, everybody came and people kind of loved it from the start. The journalists were saying to me that I’m only saying this because I’m the head of press and I was like, no, no, no! I love this place!

In 2003 my magic moment was when Bjork was performing. Not only because her music meant to me a lot of things in the past. One of the most important things about Bjork, is that I had the fantastic privilege to translate her press conference and it said so many things about her music and her production, which I agreed in terms of being a woman. It was a very rich experience, I never felt before. I thought it was putting a statement on how woman are in music, how women produce in music.

Another moment that is very cruel but also very nice is Beastie Boys in 2007. I had a very good relationship with them. I actually interviewed them for a TV show in New York when Sonar was taking place. We became good friends and they are the only artists that I asked to sign my accreditation, which they did. I still send a lot of thoughts to Adam, it has been an amazing experience.

Another funny thing as a contrast is CHIC. When they played, we also had Nile Rodgers doing a press conference. He is the history of music, the history of funk. The conference was so amazing, he knew so many things and was so open to share it with us press and people. At the same time my curiosity was to see who was going to come CHIC at Sonar. And I was completely fulfilled when I saw in the first row, lots of people they were super chic actually, wearing amazing outfits. Some other generation has also ‘got’ them!

There’s some things that I’m missing the experience from back in Marbella again in 1999. Laurent Garnier, Richie Hawtin, John Aquaviva, me and all the family used to spend a lot of money to go on the bumper cars! We spend the whole night bumping into each other, the next day everybody was crashed and bruised cause we spent all this time in the cars. Really funny moment!

One of the best things in terms of concerts was Yo La Tengo in 2002. That was a very magical concert, something I’ve never seen at Sonar. All the audience was sitted on the floor of Sonar Park. Everybody was listening to the concert which was about the soundtracking of films. One of the most magical lectures we’ve done in the Park. The Sounds of the Sounds of Silence.

What would you like to add regarding this year’s Sonar, to close our conversation?

I’d like to add that we have a closing party on Sunday, which will be in the CCCB area and MACBA, the old venue of Sonar by day with Max Richter and bcn 216. It’s very important to spread this out.