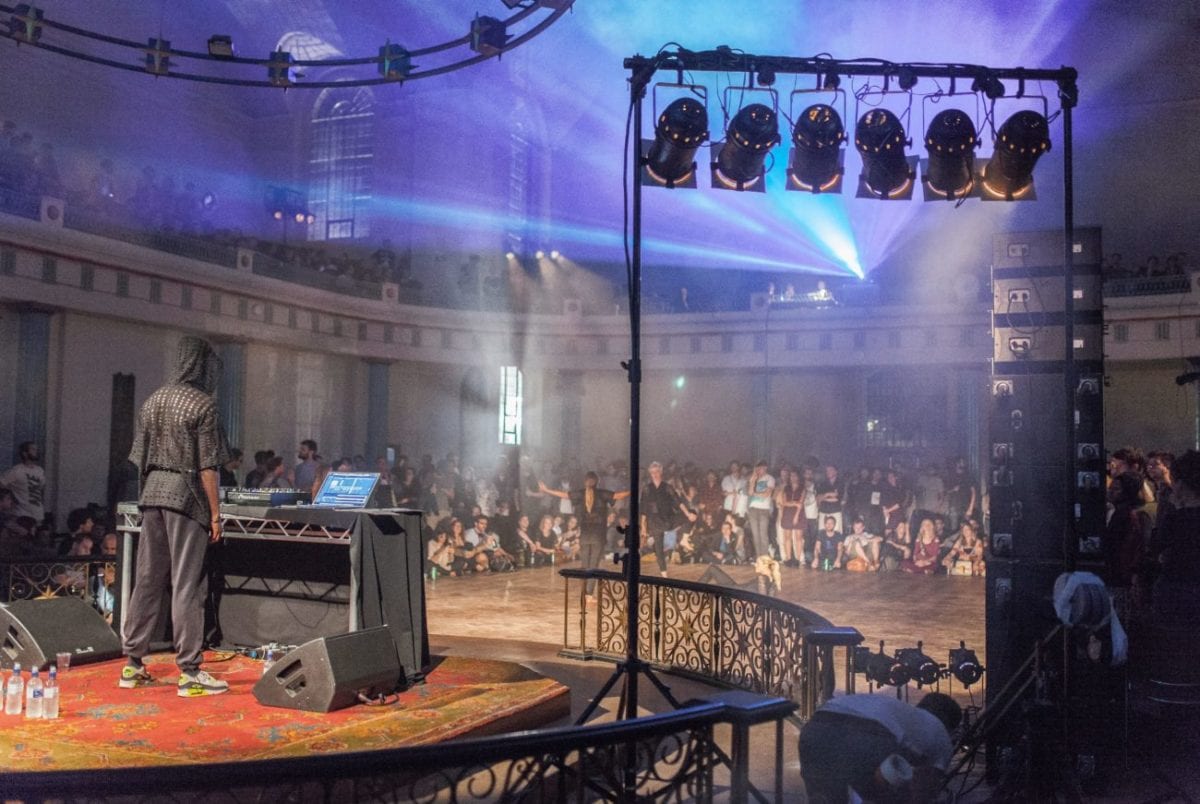 On Thursday 29th August St John’s Sessions in Hackney will host a unique live performance from Werkhaus. The performance entitled “A Shared Cultural Memory” is an experiment between the three artists Actress, Eddie Peake and Nic Hamilton. Each of their creative processes will adapt and respond to the location and to each other simultaneously, forming a situation improvised through creative timing, natural chance and mechanical subversion.

Ahead of the show next week we spoke to Darren Cunningham aka Actress to discover more about the concept of the show as well as his personal interest in art and the creative vision for Werkhaus, the creative house associated with the Werkdiscs record label.

We are also offering a pair of tickets to “A Shared Cultural Memory”. To enter please visit our Facebook page.

Tell me about your personal interest in art, have you had any formal art training, studying art at school?

Not really, although I have recently finished reading the Symposium by Plato.

Have you been to any galleries or exhibitions in London recently that really stood out to you?

No, but in 2012 I went to Turner Contemporary in Margate and saw works by Franz Kline. Specifically the piece entitled Meryon. I visit the National Gallery at random times to re-look at things.

I’ll also meander around The Burlington Estate in Mayfair on occasions where there tend to be exclusive exhibitions going on. More recently there was a Rodin and Francis Bacon exhibition where they compared the two artists, which I found interesting.

Tell me about Werkhaus, its origins and happenings?

It’s a really simple concept based around the creation and archiving of intellectual property. I think about things and then I more often than not find a conceptual basis for a thought. Ideas seem to come and then disappear into the ether, and there’s never really an overarching purpose to anything, It’s just a devoted desire to put ideas into practice.

Our debut event was an exhibition in a small space that showed some of the work we had produced that only really existed on the Internet, which I find really frustrating. We hired a space and hung some prototype R.I.P frames it was really minimal stuff. We played the feature length version of the Maze video created by Jamie Thomson and Luke Alexander, which is a journey through a very stark landscape simulation.

It’s close to the themes that we’re currently exploring, simulating our surroundings by synthesizing nature. The title of the performance at St. John’s is “A Shared Cultural Memory” and that’s exactly what it is, we’re sharing an idea and projecting subtle theories and seeing how it plays out. As nothing is overly rehearsed the performance is the process.

I’m least interested in displaying a finished performance.  I don’t think I’ve reached the whole in anything that I have done yet; I see everything I do as part of an ongoing creative process.

In terms of mediums, video and audio for example, are there any mediums you do not explore, what about architecture?

We’re currently in the middle of developing a robotics project, which also incorporates architecture.

For the performance at St John’s you’re working with Eddie Peake, who is responsible for the ‘performance’ – is he using dancers?

Eddie works with many different mediums, one of which is performing artists, so it’s fair to say that dance is part of their repertoire, but for this event we’re not focusing on dance but on movement and investigating discipline.

The inspiration however for this performance does in a way come from dance, looking back at how John Cage and Merce Cunningham worked together and were interested in each other’s discipline, and how Cage encouraged chance within the music but also applied that to bodily functions and expressions.

How did you discover Eddie Peake?

I happened to go to one of Eddie’s live performances and watching it put me in a strange place. (Often the art that I like the most creates an unaccustomed sensation, something inexplicable that I can’t quite put my finger on.)

What did you feel when you saw Eddie’s performance?

Well his performance at Tate Tanks did investigate eroticism and homosexual eroticism and it was on the edge; it involved plenty of nudity.

In the past I’ve been guilty of dismissing performance-based art but Eddie set a voyeuristic mood, it was seductive and nuanced.

The press release for the show says that Nic Hamilton will be exploring decay and regression. Can you expand on that theme?

I talked to Nic about projecting a decayed paradise, which could be considered as the future as depicted in a POP video.  Having said that I didn’t want palm trees and flowers or an exotic interpretation, but a more realistic response to our surroundings, so junk, rubble, demolition and construction.

So the performance is the shared cultural memory?

When did you start talking to the organisers at St Johns?

They approached us to “do something” early in 2013. Initially they were asking for an Actress performance, but the timing felt like a good opportunity to explore something new.