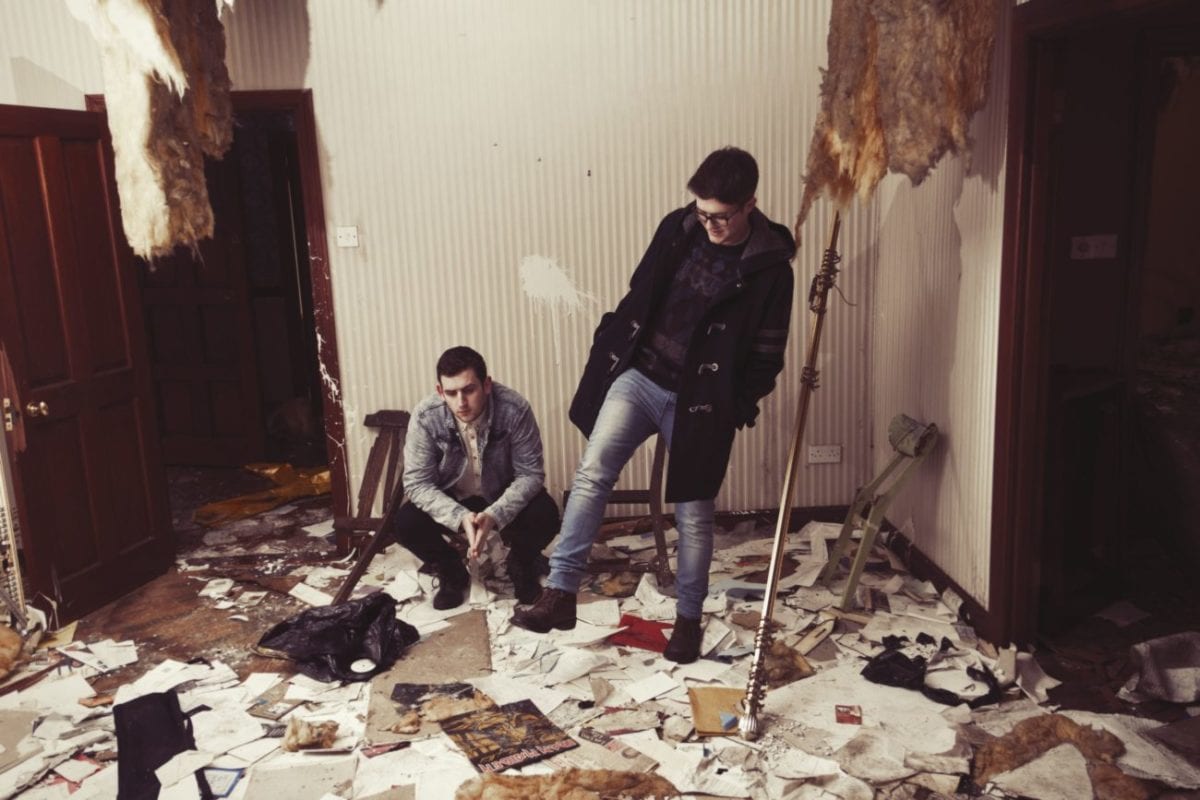 Ghosts are a production duo based in Dublin made up of Kevin Gleeson and Padraig Ryan. Having released three successful EP’s blending dark, melancholic songwriting with bass heavy, dancefloor productions of various musical styles, Ghosts caught our attention. We caught up with them to discuss their music, the misconceptions of being anti-social bedroom producers and Dublin’s music scene.

What have you two been up to this summer?

Kevin: Mostly just relaxing. I just finished a degree. Paudie’s been making tons of hip-hop with our friend Robin. It’s sick. I can’t wait for people to hear it. I’m working on a Jungle side project as well, which I’m also excited for people to hear.

Padraig: Yeah just been tucked away writing and producing music of all sorts, be it Ghosts, Kevs Jungle stuff or this weird Hip-Hop stuff I’m doing. It’s really exciting to hear what we both write for stuff that isn’t ghosts because there’s no compromise with the creation of the songs. It’s like listening to a new artist. I’ve also been preparing for a short film that I’m directing very soon.

Did you go to any festivals this summer?

We played a really cool festival in the middle of Ireland two weeks ago called Castlepalloza. We’re played this year at Electric-Picnic, which has always been something we dreamed of doing. Having gone to it the last couple of years as punters and had the time of our lives.

How did you guys meet? Did you ever make music separately before creating Ghosts?

K: We’ve been making music together since the start of secondary school. We started out making really bad satirical rap music in Fruity Loops. It’s all still on the Internet if you can dig deep enough. We slowly moved into more serious, Radiohead influenced, band music with some electronic elements under the name Ghosts. Then about two years ago we released some music that some people actually started to like and praise and that was Doxology and then we continued to make music in that vain.

P: We never produced music properly before we met each other. We went through a couple of different phases musically. We only got into the production side of things as a result of listening to Radiohead I think. They were the first band I listened to that made say to myself ‘’Holy shit, how are they making those sounds’’.

When I first heard your music I was convinced you were from London. That early Dubstep sound is quite noticeable in most of your work. What do you guys usually listen to?

We listen to absolutely everything. We had just got into Burial around the time we made Doxology and that had influenced us at that time and that is pretty evident. We never really listened to Dubstep and were not really educated about the history of dance music at the time. I’ve only really gotten into that side of things in the last year and a half.

I was obsessed with The Beatles and Bowie growing up. Then we both got into Radiohead in a very big way and then started to listen to everything that Thom Yorke would have been influenced by and would blog about. Aphex Twin, Four Tet and Burial. This would have been around the time I would have moved to Dublin. At that time, coming from a tiny town in the south of Ireland we were completely oblivious to current trends in dance and electronic music. I think that’s good though because you’re not trying to make something to live up to any current standards.

P: I think Kev hit the nail on the head. We had no preconceptions of what was cool or what the norm was with dance music. When I was writing songs, I was only teaching myself Piano at the time, so my ignorance ended up making for some original sounding stuff. The music we were making was just reiterations of all the stuff we were listening to at the time. But the weird thing is I listen to huge amounts of Hip-Hop and R&B music, only very small amounts of the ‘dark dub’ stuff. Kanye West is my Hero believe it or not. Kev and I were also in a choir for six years so that kind of stuff always tickles our fancy. Were obsessed with musicals too. Especially ‘Chess’ and ‘Jesus Christ Superstar’. I think you’ll see all of these influences on our next release.

You give off that vibe of producers that stay indoors all day and only make beats in their bedrooms. Am I right?

K: The music we make as Ghosts is very much programmed music. I’m a classically trained pianist. I also play brass and we both play guitars. Paudie is an insane Bass player. We try and put as much musicality into the music but it seems the most effective way for us so far has been to do it precisely with a mouse. That’s just to do with the style really. It’s funny though because we’ve been reworking a lot of the songs we wrote before Doxology and producing them to fit in with the style were making now and its working a treat.

P: Bass was my first instrument so I always love deep bass lines in music. I play Guitar, Drums, and Piano. I taught myself everything. I couldn’t handle the lessons. The point we’re at now is really fun and challenging because we’re trying to rework some songs we wrote when we were 16 and they’re just coming out beautifully. We can’t wait to show you.

There’s a lot of pain in some of your records. Is that personal?

K: Not really. I’ve always been into really depressing music. It’s what makes my brain feel nice. Naturally a person is going to make the music they like. Everybody is drawn to different musical characteristics. I like the sad stuff. I wouldn’t really associate personal pain with programming electronic music. I think that comes from more performance-based music, which I also do a lot of and am slowly trying to incorporate into our music.

P: I would rather not talk about it…  just joking! The only thing personal about our previous releases was some of the lyrics. I can only speak for myself there. Our new stuff is a bit more personal I think because there is a lot more performance incorporated into the production, and some of them are songs we wrote when we were moody teenagers.

I feel like the ‘WLVS EP’ is without a doubt a huge progression for you guys. Was the production process similar to your previous work?

K: Exactly the same. A lot of if it was made before Judge was released. We always make the tracks before even thinking about a release. And then when it comes time for a release we pick the ones that work best together. The song WLVS would have been the last track made for the release and probably sounds a lot fresher as it’s a song rather than a tune. It’s our vocals on it. All our new stuff is like this. No more instrumentals.

Has much changed since releasing it?

K: Our lives are the same. We’ve become a lot more educated about the industry and how to release music more effectively. It’s kind of frustrating. We would have normally just released to our hearts content by ourselves but now that were at the level were at, we need to plan our releases a bit more and strategies them. It means were sitting on tons and tons of music and we’d like for people to hear it soon.

P: Yeah, its super frustrating when you make new music and your listening to it constantly going ‘Jesus, I fucking love this’ and all you want to do is give it to people and see what they think. But we can’t do that because we need to remain enigmatic and try our best to make people salivate for another release. But I digress.

Paudie, your singing plays quite an important part on ‘WLVS’. I feel like it’s quite an insightful track into you personally. What’s the story behind it?

P: I’m a hopeless romantic. It’s Primarily just about relationships and the damaging affect they can have on your head if they don’t turn out well. The character in the song is in a dark place and is in pursuit of something cathartic, kind of a ‘hopelessly devoted’ situation. It’s sappy when you lay it out like that though.

Tell us a little bit about Champion Sound Music. It seems like there doing really interesting things. How did you get involved with them?

K: They’re a relatively new label based in Belfast. It’s run by Lyndon Stevens. Super dedicated. He puts the time and money into a release to make it stand out as best he can and get it the right press and stuff. Putting out vinyl is a big thing for a label as well. We we’re approached by Unknown, who’s also on the label if we would be interested in a Physical release with CSM and we jumped at the opportunity as we were trying to get our next release out with a label anyways so it would be released right.

Can we expect any new music soon, an album perhaps?

K: You can expect another EP in January 2014. We could probably release about 3 albums worth of material right now but we’re not really sure if that’s the most effective way of going by it. Maybe it is. I don’t know. We’ll put out some new music before then somehow. Not sure how to do it yet but I’ll figure it out. Our new stuff is very very different I will warn you.

P: We would love to show you new stuff but we can’t. Such is life. January is fucking ages away too. We’ll put up a track in the form of a video perhaps? Who knows we’ll surprise you!

We would love to see you guys play in London. Any shows coming up?

K: We would love to play in London. Book us.