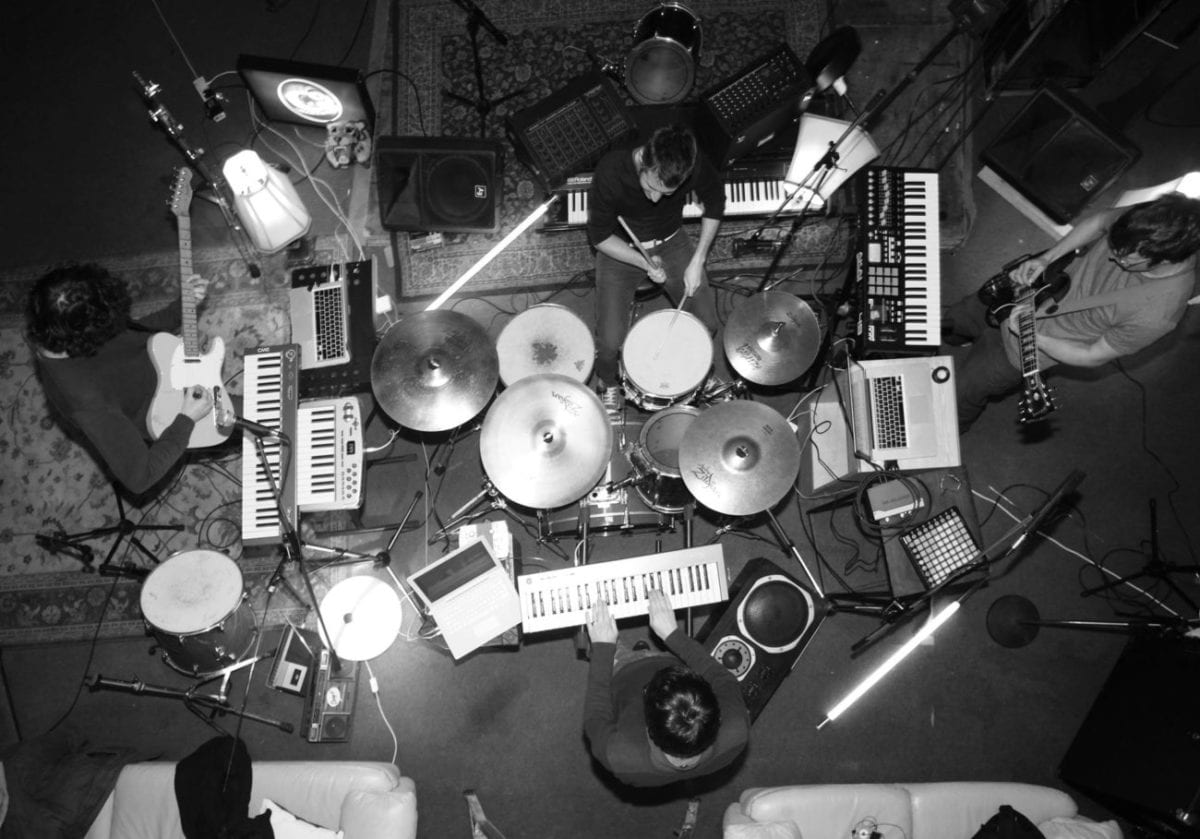 LuckyMe’s next release comes in the form of a Scottish three-piece band, going under the name American Men. A label much hyped for bringing Hud Mo, Rustie, Mike Slott and more further into the conscious of beat addicts globally – this EP demonstrates their super-wide taste maker skills. For those who are hitting Sonar, be sure to check them out on the Saturday night as part of the LuckyMe showcase.

We got in touch to see what American Men are about, and a little over a week later they replied with…

“Yo, sorry for the delay. Ali has been doing maths in Bavarian nunnery so he was only able to get his answers to me today…”

So you guys have been in some pretty acclaimed bands, could you fill us in on your history up until now?

Claude: We’ve all been in bands, on and off, since we were at school. I’ve been in bands that were hyped locally, and did a couple of Peel Sessions and T in the Park – which was pretty epic for me at the time. More recently we were all in a band called RUSSIA alongside longtime friend and collaborator Tony Jaguar. We all thought the band was totally awesome, but (for me at least, and I think for T-Jag too) the internal pressure of that was immense. It was genuinely difficult to do or think about anything else during that period. That said – if I’m honest, the kind of music we played (complicated and largely instrumental math rock) was never going to be that popular – I think it’s the kind of thing that a few people go nuts for but largely passes by unnoticed. There was a certain mythos about us at the time but that was largely just self-created hype…

Paul/ Scott: Five years ago, I got an UNSOLICITED email from Claude saying he was looking for a drummer and would I like to hear his band’s demo (Claude: I got his email address, and a strong recommendation, from David Roy, then of Multiplies and now of Dananananaykroyd). I’d been drumming in various bands for years and was definitely looking for a new project. I loved the demo and joined him and a friend in RUSSIA. We played together for five or so months before I moved to Canada for a year, during which time Claude unearthed Alilloyd from the Edinburgh Post Rock Bassist and Guitarist Pool (it’s like a swimming pool only with more strings). RUSSIA became a four piece; we played a couple of gigs and split up unexpectedly. During that time, Claude, Alilloyd and I remained pals and talked about forming a new band during a visit to the Primavera Sound festival in Barcelona. We procrastinated for a year or so, became lawyers, studied uber-mathematics or joined Dananananaykroyd until Claude wrote a pile of songs, forced us to learn them and American Men was finally born.

Alilloyd: While I was in RUSSIA I was also in a band called Eunoia with Miami Hair (who completes our live line-up). I wouldn’t say we were acclaimed, but hopefully a few people were into it.

How did these bands shape the sound you have with American Men? How are you finding balancing your time with this and your individual projects?

Claude: I think AM definitely has a lot in common with RUSSIA, I mean, being in that band was a pretty formative experience for me musically. On other projects – I have a pretty involved day job and AM is taking up a lot of time so other projects are taking a back seat for the moment, which is cool really.

Alilloyd: RUSSIA is now a yardstick against which I measure any music, especially stuff I am involved with. Eunoia was essentially sad music I think, so ultimately it doesn’t have too much bearing on AM. So the little time I have to do solo stuff is really a continuation of the less upbeat part of my creative output.

Paul/Scott: – I see American Men as an extension of RUSSIA. The time we spent in that band allowed us to develop the intuition we have now. Playing in Dananananaykroyd is my full-time job so I can’t give American Men as much attention as I’d like although I’ve had more free time than expected recently, so we’ve been able to play a few gigs and be on the radio and stuff. I’ve got another project on the go just now called Ghost Pants. It’s just me playing guitar ham-fistedly over a drum machine all drenched in reverb (to cover up the mistakes).

Your first release has got some pretty heavy remix work on the flip. How did you go about deciding on who you wanted to re-work your stuff?

Paul/Scottt: – Most of the credit has to go to LuckyMe.

Claude: Yeah it was really sorted out by LuckyMe – Dom Sum knows ikonika and falty dl so he got them on board, and then Machinedrum and Hudson Mohawke are affiliated with the label so they were into doing mixes. It’s held up the release of the ep, but hopefully people will think the wait as worth it.

From the videos I’ve seen, you’re live shows look immense. How have they been going? What have you got planned for your slot headlining the LuckyMe showcase at Sonar?

Claude: It’s funny; we’re still finding our feet live really, but the reaction has been pretty awesome. Our first show was at cargo in London to maybe 4-500 people, a pretty clubby audience, and they went mental. All the shows have been great actually. Because Scottt/Paul is busy with Dananananaykroyd for the last couple of shows our friend Robbie Cooper (from the consistently amazing Laeto) has been standing in, and he’ll be doing that at Sonar too. We’re actually the first act on at the LuckyMe showcase – we’re on at 2am just after Fuck Buttons – and the plan I guess is just to be as tight/energetic/engaging as possible. We’ll probably have some lasers based on jets, visuals and base-jumping.

Ali: Playing live is for me the best part of being in a band, so I’ve been really enjoying them. And I suppose it helps that the reaction has been pretty good.

Paul/Scottt: – We took quite a while to work out exactly HOW we were going to do it. We wanted it to be instrument-led rather than sample-led and thanks to Apple (lol), we found a way of doing it. Also, by putting the drum kit at the front of the stage, it adds a different visual element. We figured people might get a bit bored of watching guys lurched over keyboards. (Also, I’m the best looking one so I should be at the front.)

What other gigs are you particularly excited about over the summer?

Claude: We’ll be playing some pretty diverse shows I think. The Friday after sonar we’re playing at a fashion show after party in Studio Warehouse in Glasgow (hopefully with Robbie and Paul both drumming at the same time), and then we’ll be lining up one or two European shows I would think. I’m hoping to play Hoya:Hoya in Manchester and maybe also a show in Leeds organised by our friend and LuckyMe label mate Respite.

Alilloyd: I’m going to interpret the question differently and say that I can’t wait for the RNCM Symphony Orchestra’s forthcoming performance of Stravinsky’s Rite Of Spring, alongside one of Jonny Greenwood’s pieces.

Claude: In a similar vein the Kronos Quartet is playing Different Trains in Edinburgh in August, which will be tremendous so I’m very excited about that.

Paul/Scottt: – I’m apparently playing a festival with Sepultura later this summer, which should be… weird.

It really appeals to me how LuckyMe feels truly independent as a record label. With a sense of pushing homegrown talent, as well as finding affiliations with people from further afield. How did you come about getting hooked up with those guys?

Claude: I’ve known Dom Sum and Martyn (FineArt) for about 8 or 10 years so the affiliation has pretty much been there from the off, but I guess the AM involvement was me visiting Dom in the clothes shop he was designing for and playing him some of my stuff offhand as we were talking about music. I think he was the first person outside of RUSSIA to hear it. From LuckyMe’s perspective they didn’t want to be pigeonholed as a hip hop or (worse) “wonky” label – so it made sense to branch out a wee bit – although to my mind our sound isn’t a million miles away from the likes of Rustie, Hud Mo or Mike Slott so we do fit in I think.

What does Glasgow mean to you? From somebody who has never been, there does seem to be a certain amount of musical mystery about the place.

Paul/Scottt: – I’m the only band member who actually lives in Glasgow and I think it’s fair to say I’m fiercely proud of my city. You can go see a band any night of the week here. There’s a pretty big DIY scene, always has been. Everyone is in a band. I’ve lived in a few different cities around the world but Glasgow has always and will always be home.

Alilloyd: When I cam to uni in Edinburgh, almost all of my favourite bands were from Glasgow. It had this mythical status to me. So I ended up going there a hell of a lot. The first time was like a pilgrimage, particularly going to Nice ‘N Sleazy’s and verifying that they really did have Slint on the jukebox. There always seems to be something interesting and different happening there musically.

Claude: I’m not from Glasgow; I’m from Edinburgh, so to me it’s the other city, the deadly rival, haha. I think I probably hate it and love it in equal measure, it’s messy and noisy and brash but the gigs and clubs are a billion times better than Edinburgh. I’ve been to at least twice as many good gigs in Glasgow than the city I live in so I owe it something..! As a teenager I’d go through once a week minimum with enough money for the bus, the gig and one drink, and I know that period had a huge impact on me musically.

What are your outside influences? Musical or ideological.

Paul/Scottt: – I grew up on indie rock so Sebadoh and Pavement influenced me most when I was younger. Recently, I’ve fallen back in love with Devo. I’d like to incorporate some of their precision when doing rhythms for the next AM record. With regard to American Men, I’d say musicians like Boards of Canada, Steve Reich, Don Caballero and the writer Thomas Pynchon have been key. Outside of music, I believe firmly in Infinite Source and the Law of Attraction. It’s not for everyone, but it works for me.

Claude:- All of the above plus a load of Scottish bands, specifically Laeto, Stapleton, Okker, Sawyer, Senator, and a load more I can’t remember right now. Also, Phil Collins, some of whose songs I think are genuinely brilliant.

Who are your favourite American Men, past and present?

Claude: Rick Froberg from Drive Like Jehu, and Thomas Pynchon.

If you had to ask one them to join you on stage, who would it be and what would they be playing?

Paul/ Scottt: I’d like David Byrne to play ‘Lamp’ at our next gig.

Alilloyd: Either Jason Noble, who would probably play guitar, or David Lynch who would provide visuals and inter-song banter. I’m thinking the sort of non-sequiturs that comprise his twitter feed.