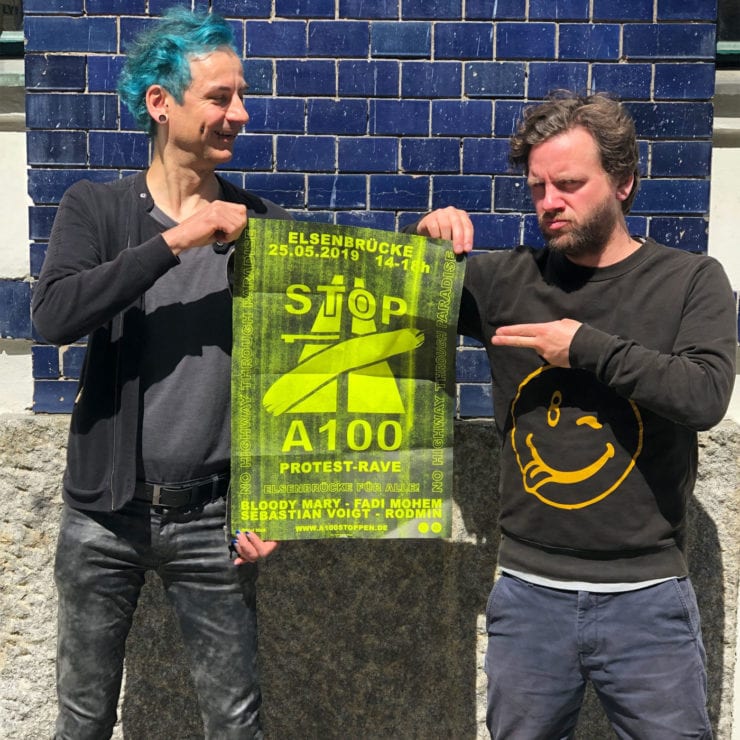 It’s a sunny day in Berlin and I’m standing outside the FluxFM studios on the river Spree waiting to meet Tobias Trommer (pictured left), founder of ‘A100 Stoppen!‘ and Tony Ettelt (pictured right), general manager of Wilde Renate, to discuss the implications that the A100 autobahn will have on Berlin, ahead of their A100 Protest-Rave taking place on Saturday 25 May on the Elsenbrücke.

For those not in the know – planning of the A100 began in 1992, when the federal government (not local) determined that a high speed ring-road was the best solution to ease traffic congestion in the city. Now, 27 years later, the next section of the autobahn threatens to dramatically rip through the neighbourhoods of Neukölln, Treptow, Friedrichshain and Lichtenberg – forcing local residents and businesses to relocate, as well as demolishing three of Berlin’s key clubs; Wilde Renate, Else and ://about blank.

In the interview below, Tobias Trommer and Tony Ettelt share their insight about the A100 and help realise what effects it will have on the city of Berlin. 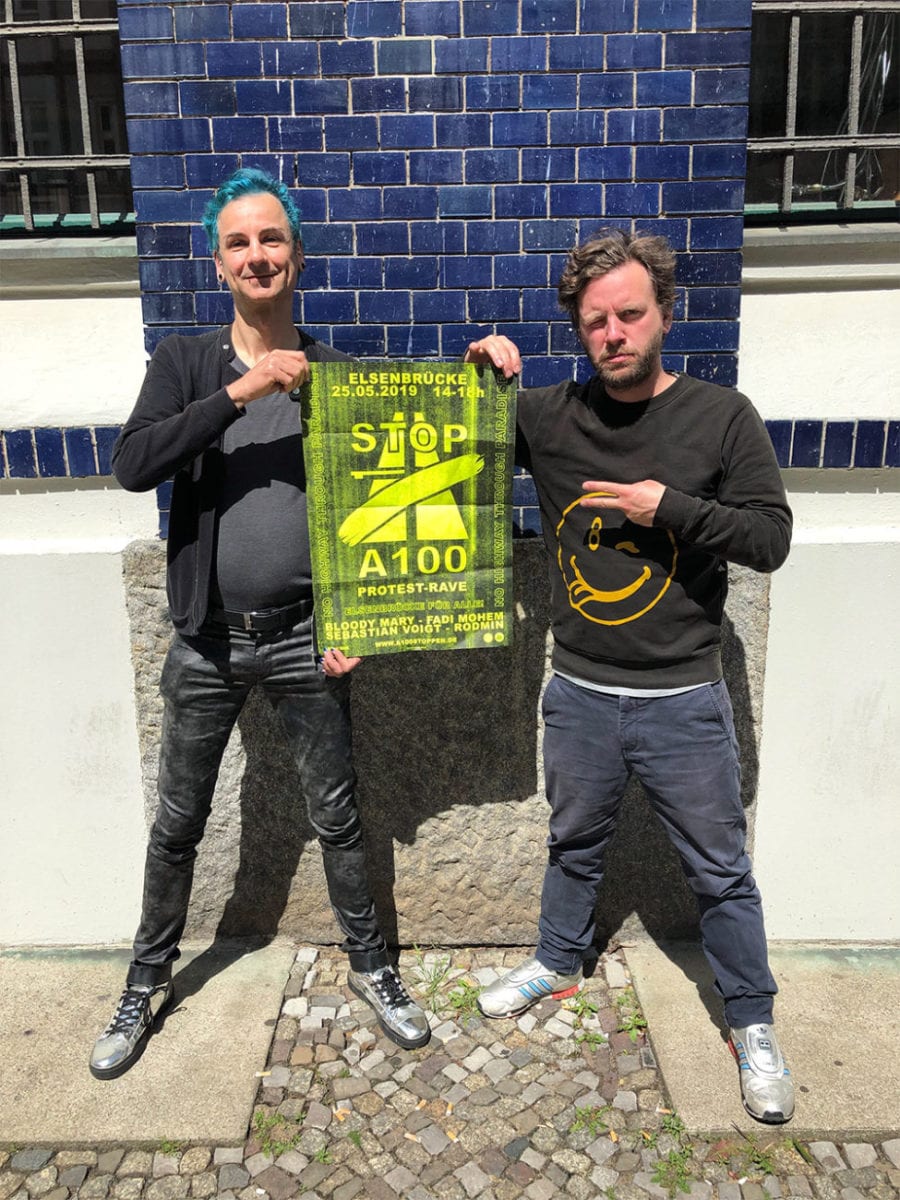 How long have you been protesting against the A100?

The protest against the autobahn started 17 years ago. The A100 is built in sections, so they initially began construction in the west of the city and are now at the Neukölln to Treptow section.

What percentage of the A100 has already been built?

The autobahn section from Neukölln to Treptow is in construction. The authorities want to complete the ring road, but we want them to stop, as it will be detrimental to the area and will bring a lot of noise and pollution into the area. It also directly threatens the existence of Wilde Renate, Else and ://about blank.

Who decided to build the A100?

Despite being a road in Berlin – the local government has no say or control over it. Instead the national/federal government are in control.

Is there an alternative solution for the A100?

We don’t need more cars in Berlin, we are increasingly adopting bicycles, scooters, car sharing and other modes of transport to combat congestion and pollution. We also need more space for pedestrians and bicycles in the city, like they have in Copenhagen.

Additionally most Berliner’s don’t own a car, so building an autobahn will only benefit a few. It won’t improve travel time for people traveling from the north to the south of the city or vice-a-versa. 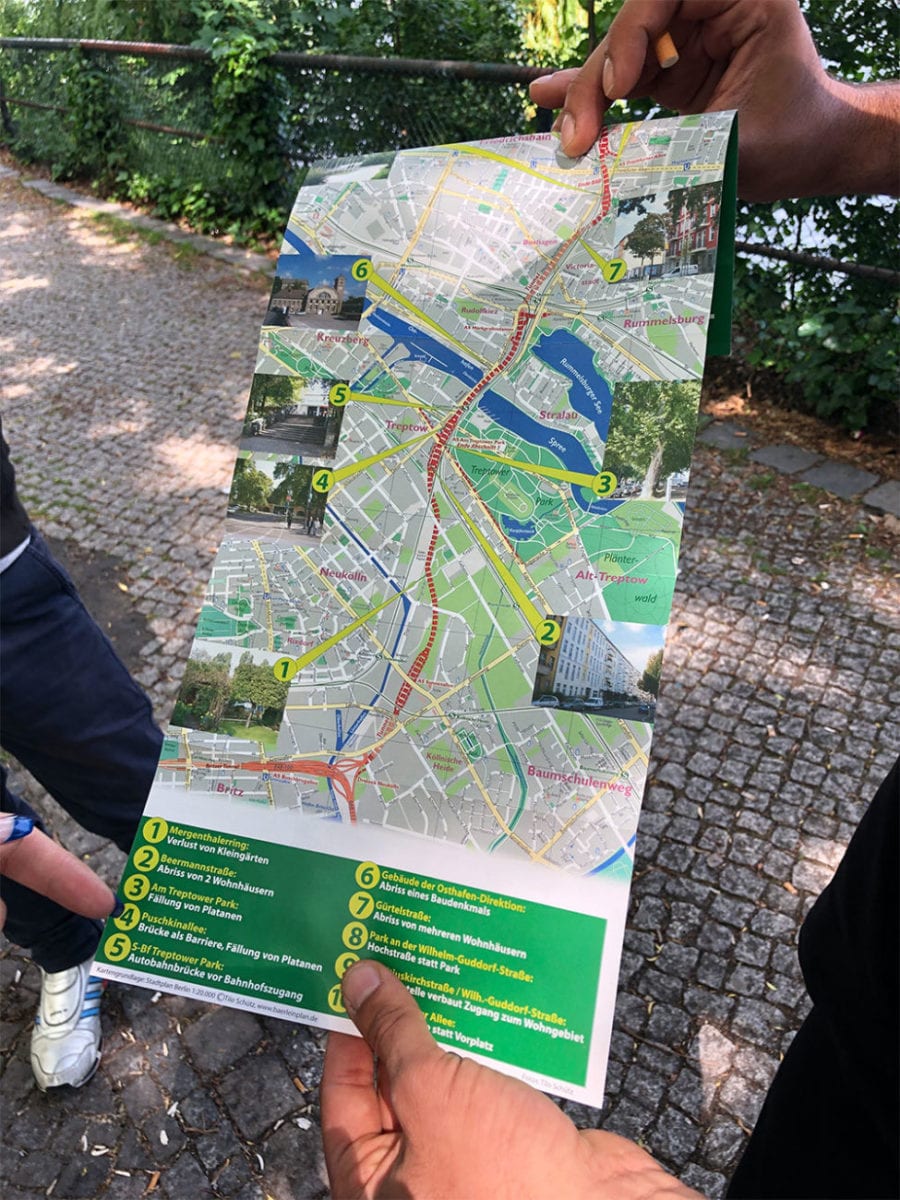 Do you think the A100 would have a negative impact on tourism in Berlin?

Most definitely – closing three key clubs will have a massive impact on tourism.

Can you tell me about the implications that the motorway will have on local businesses and residents?

Essentially the autobahn will go directly through Wilde Renate and Else. The area where ://about blank is located will be flattened to make way for construction workers, materials and equipment. So this could have a knock on effect and close three more clubs in that area.

A lot of people will lose their jobs and their apartments too. The area that the autobahn covers is 72 hectares (0.72 Kilometers), which could be used instead to build 8,800 flats, housing up to 22,000 people.

Tell me about the A100 Protest-Rave taking place on Saturday 25 May in Berlin.

We’ll be taking over the Elsenbrücke from 2 – 6pm on Saturday and we’re expecting thousands of people to attend. There will be music playing and speeches every hour from Changing Cities, A100 Stoppen! and representatives from each club. Everyone is invited to come together and demonstrate on the Elsenbrücke.

When is the deadline for the completion of the autobahn?

There is no deadline – they keep on delaying construction more and more. The government of Berlin say that they do not talk about it, and do not seem to be pro or against it. So they are passing on responsibility to the next government, which will be in place in 2021. So we are in stalemate.

All photography by Tom Durston