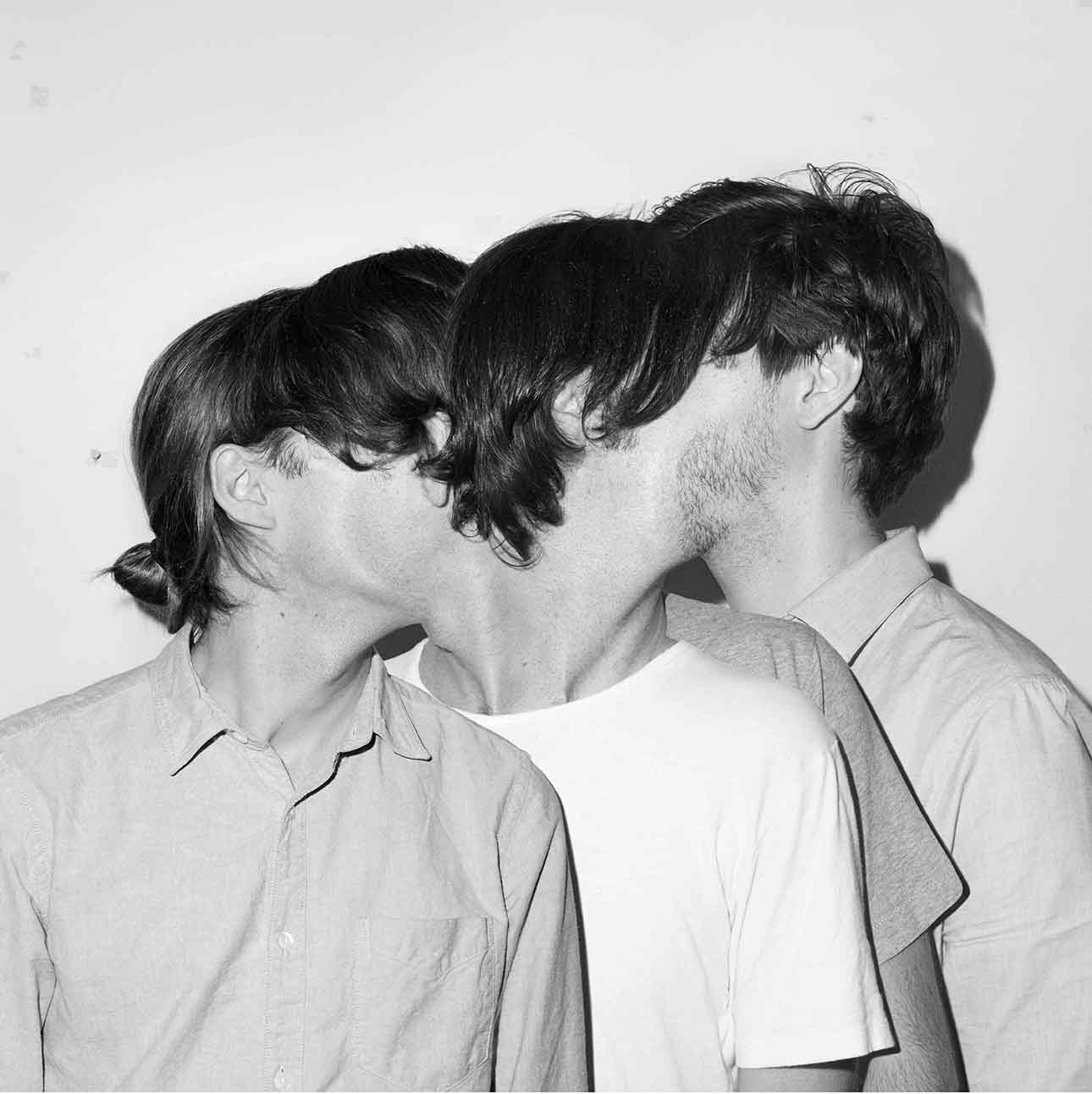 Following Cut Copy‘s sold out show at Oval Space in Hackney on the 26th November, we caught up with Cut Copy founder Dan Whitford for a coffee in Old St to discuss the Australian bands fourth studio album “Free Your Mind“. In the interview Dan opens up about the origins of Cut Copy, the bands first gigs, crate digging for records in remote locations and the reference within “Free Your Mind” to America’s 1960’s socio-political counter culture.

Can you tell me about your musical heritage and how you got interested in music in the first place?

I started getting into music towards the end of high school around the year 2000. I went on to do a radio show at Melbourne University and then just progressed to DJing out in Melbourne, really. Then it all happened from there.

Once I started getting into sampling I stole my parent’s entire record collection… I wasn’t ever that interested in their jazz, funk and soul records but when I started getting really into electronic music, it suddenly dawned on me that I could borrow their records and turn it into something else.

I started out working with a sampler and a basic keyboard and doing these sort of home studio instrumental tracks, which slowly developed into having little vocal parts and then eventually I started working with Tim and the band.

The guys in the band were all buddies of mine beforehand, we used to hangout and go and see gigs together all the time. There was never really a moment where we decided to start a band, we just started making music together. Everyone had different musical tastes and we just started vibrating together and it sort of evolved into this band thing that had its roots in studio recording, but also had a live entity as well.

Tell me about your first shows?

Well, for our first show we actually booked this venue where we knew no one we knew would turn up, in order to just develop our live sound. We also put on a bunch of shows under pseudonyms to throw people off. We’d end up playing to a couple of bar staff and the old guy in the corner!

For our first actual show as Cut Copy, we got booked to play a few festivals by our label. They were big festival appearances in Melbourne, Brisbane and Sydney. Our first show was actually supporting the Yeah Yeah Yeahs and The Liars (who had also released on our label) so I guess we were pretty much thrown in at the deep end! It kind of worked I think…we didn’t take it that seriously, we probably still don’t take it that seriously…but as long as we are enjoying it we’ll keep going.

How did you get involved with the record label ‘Modular‘?

Before I’d even started working with the band I sent off a demo, it might have been a tape actually, as it’s that long ago! I sent it off to a whole bunch of international labels and one of the only Australian ones was Modular. About a year later I got this call from the label boss who really liked the record…and I guess it all happened from there.

Are there any recurring themes or narratives in your albums?

Well yeah, I mean each record has its own theme and direction. I feel like often the records that we make are sort of an assimilation of what we are all listening to at that particular time. You know, all these different reference points, all these different types of music, films or whatever and it all ends up melding together into our song writing process.

How do you go about sourcing records?

When we’re touring it’s almost like a research trip. We all come back with heaps of records we’ve picked up. We travelled around the United States a lot on a tour bus and often it’s the in-between places where we find the best records.

In the big cities the stores have been picked to death. As much as I love going to London and New York – there are some amazing record stores there, but you just don’t really get those gems. If we have a day off in a random state we find the best things. I got this box-set of Brian Eno – honestly it was like 20 records and I already had a bunch of them but I just bought it anyway, it was amazing!

In the digital age, with tools such as Soundcloud and YouTube enabling people to stream entire albums, the tradition of listening to an album from start to finish has been obliterated. Do you think the idea of an album is as important as it was, say 10 years ago?

Well, it doesn’t stop us wanting to create albums. I love listening to records, I love sitting there and listening to the whole piece the artist has created for 40 minutes to an hour or however long it is. When we make records we want it to be an experience for our listeners as well.

It definitely feels like the tide has turned against the idea of an album, a lot of people are just putting out tracks and that’s kind of the currency nowadays. In some ways it makes me want to fight it even more, to make it harder to split things up, having things flow together as one piece. I kind of compare it to watching a short film compared to a feature film. You have so much more potential to tell the story, if you’re listening to things in isolation you don’t always get the full picture.

Lets talk about your new album “Free Your Mind”. How long have you been working on it?

I guess probably about a year and a half. We spent most of the time making it at my home studio. Then we mixed it down in upstate New York.

During the process we had this idea of making a song a day, It became a brainstorming process for around 3 months. We went through all the ideas and worked through them collectively and picked out the best tracks. Then we ended up finding this warehouse space in Melbourne, set up all our gear and made it our new home for the next few months, it’s actually where we recorded the majority of the album.

It’s important to have the ability to record live music, and it’s important for us to all go through new material together. I probably write the majority of our stuff in the beginning, but without having everyone work on it, it doesn’t feel like it reaches it’s full potential.

Are you a bit of a control freak about making music then?

You’ll have to ask my band mates! But yeah, probably a little bit. I guess it’s because I started out making music at home on my own, you get used to controlling every detail of it. You write a song idea and it’s sort of your baby and you don’t want anyone to neglect or do something weird to your baby!

Lets talk about the single ‘Free Your Mind’. It references 1960’s counter-culture. What interests you about this socio-political shift?

It’s just an interesting time, from a cultural perspective it was a time where there was a lot of change and youth cultural had a real effect on people. The same goes for the music and the art at that time. For me those times are really exciting, to see music kind of changing the world in a nutshell. I’ve been more into psychedelic music for the past five years, late 60’s and early 70’s stuff but I’d say our music also takes influence from late 80’s and early 90’s dance music.

The video for ‘Free Your Mind’ has an almost cult, Timothy Leary feel about it, can you tell me more about it?

Yeah, Alexander Skarsgård is a leader of some sort of cult and we wanted the clip to weave through various stages of the cult with an almost sinister feel.

An old friend of ours, Christopher Hill directed the video, he actually used to be a housemate of mine when we were at university and has gone on to direct music videos, commercials and lots of other stuff internationally.

It was pretty cool to reconnect with him, we worked collectively on a bunch of ideas while the record was still being made – not just for the video but for other things too, we wanted to have a few things that our fans could interact with in the real world without having to search for tracks and information on the internet.

We had this idea of sending these record players to Pitchfork Music Festival in Chicago and we ended up premiering our first track at the festival by cutting records then and there on the spot. I think we made about 100 copies in the end. The only way our fans could hear the first track was to come to the festival and physically get it.

Someone actually ended up videoing themselves during the first time they heard the record and it kind of became a thing! We liked the idea of making a special experience for each person.

We also had a bunch of billboards put up around the world in more remote places, with ‘Free Your Mind’ written on them and no other information. The idea was to draw people on a journey to hear our music.

The one in the UK was in Wales. Why did you select that as a location?

Yeah we actually got some flack about that, people kept asking ‘why did you put it in Wales?’ But basically the idea was for people to discover our music by making a pilgrimage. Almost like a meditative experience. We had one in Detroit and Mexico City that a lot of people got to, also one in the California desert too.

Why do you think people have enjoyed your music over the years?

That’s a pretty tough question to answer. Personally I make music for my own enjoyment and hopefully others feel the same way. So really, the process of making it is really following our own creative interests and I guess along the way people have followed us on the journey. Also I feel there’s a kind of uplifting and almost euphoric element to our music that people grasp, particularly in a live context.

What’s your experience of London?

I like it a lot actually. I’ve spent a lot of time here over the years. When we were making our first record we went to Paris for the mixing and came to London a month or so afterwards just to hangout.

I always find that London is very deeply into art and music culture in a very forward thinking way. It’s a place where I’d come to find out about 5 new bands or DJs that I’ve never heard of. It seems like it’s one of those places that has an insatiable hunger for new things, and is a bit more out there and crazy.

It’s a little too obvious in Australia. And the coffee is getting better here!

What sort of legacy do you want to leave? Lets say in 200 years, do you envisage your records in dusty boxes with people still digging for them?

Yeah, I mean I hope that people are influenced by what we do and hopefully go on to start bands or projects themselves. I always think of music as a sort of family tree that comes back around. I’d like to think that we’ve contributed something, as we are very conscious of artists that have inspired us along the way.

Any words of wisdom?

Stay off the internet. Ha.

“Free Your Mind” is out now on Modular Recordings. Buy a copy from Modular