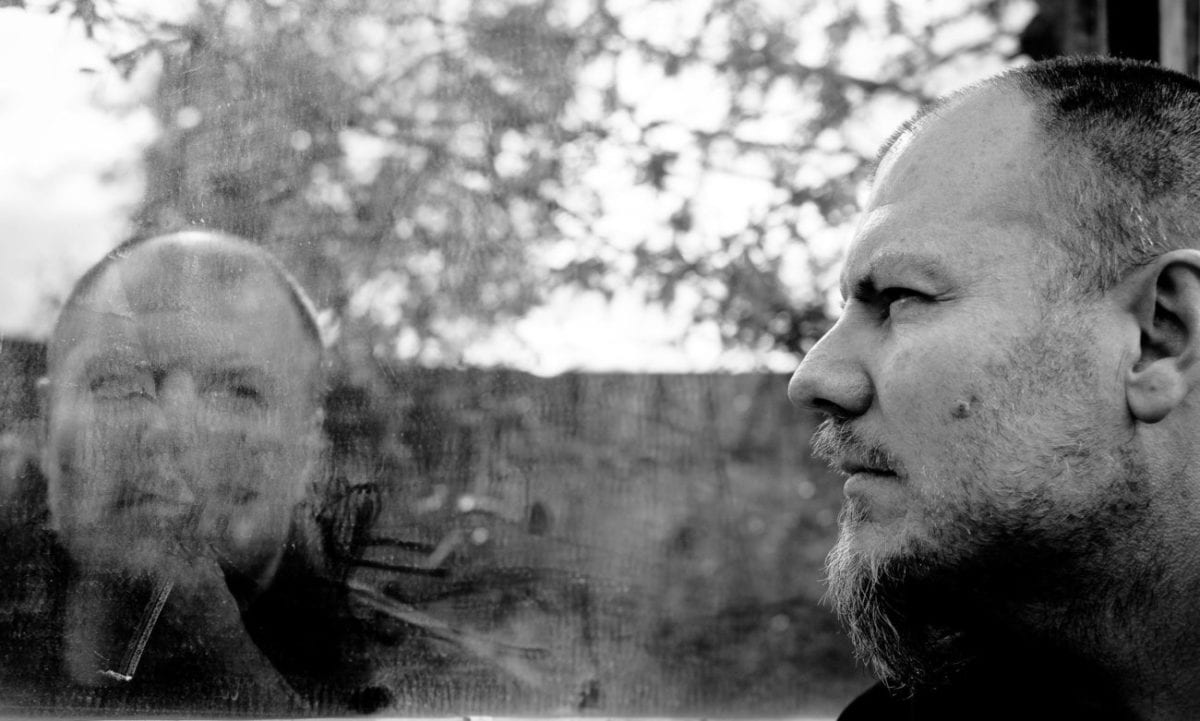 When it comes to post-Basic Channel dub techno, Brendon Moeller is one of the go-to guys. Now returning to his Echologist moniker, Brendon Moeller recently celebrated the release of his fourth studio album “Storming Heaven” via the highly reputable Berlin based imprint Prologue. In this interview Brendon discusses the makings of the new album and his shift in direction from the Brendon Moeller ‘big room techno’ guise to a more organic expression of his creativity in “Storming Heaven“. We also discuss American drug culture, 90’s techno and how technology have helped shape his musical creativity over the years, plus an 8 month DIY mission to research and construct a hand built modular analogue synthesiser.

Hello Brendon, how are you?

I’m fine, thanks. Happy to be using Skype in voice-only mode, because I haven’t got dressed yet. You know how it goes: I wake up, go into my studio, drink coffee and get lost in the day.

Is that how you prefer to spend your days?

Yeah, It’s the dream to have everyday that way, because I’m a studio guy, I just love being in the studio. I always feel I’m running out of time to learn, understand and master the instruments I have. So there is always that frantic feeling I must practise and experiment more, and really get to understand things. I guess because I come from this old school mentality, you know, where musicians usually spend 18 hours a day practising. The way I see it, very few people spend a lot of time getting to know what an instrument can do, so I try to push and discipline myself to learn everything. I get lost in electronic music these days, with all the new machines and softwares coming out.

Do you consider yourself a perfectionist?

When it comes to this, yeah. But maybe perfectionist isn’t the correct word, how about passionate instead? Passionate implies a lot more. I’m very committed to writing more music, and making it better than it was before. I’m always about moving forward, and evolving as a musician, however I don’t know if there is a point where I feel I’ve done something perfectly and I can’t do any better. I think my whole life is about chasing that point.

How has your sound evolved over the years?

I guess my evolution comes from about 3 or 4 years ago, when I began to really want to be able to call myself a musician. For me it became a personal thing about wanting to justify that, and to get there, I felt like I needed to get on the stage, and perform like a musician with my instruments in a way that truly defines being an artist. This is still a very personal thing for me.

So, my journey has gone from a DJ to playing live sets of my own music, and wanting to do something that is a lot more adventurous and a lot more fun for me. Something that involves improvised, live in-the-moment musicianship where there is no plan. You know, the machines are really made that way, drum machines are made to be jammed with. In the 70s musicians who were doing all the interesting electronic and krautrock stuff just set up their equipment on the weekends in a big room or hall or church, and they would get together and plug in and that would be it, they’d just go from there. I’m sort of embracing that approach myself.

Why do you think live electronic music is important these days?

Because most of the people are just taking the let’s-DJ-to-promote-the-album-route now, when I think there is so much adventure and surprise to be had as a live musician. The exhilaration that comes with it, is something people appreciate, especially now, when DJ culture has become very homogenised.

The digital age has just opened up the fact that everyone can get the records. Most of the labels are releasing vinyl only stuff again though, but in the second that vinyl goes out, somebody is going to upload it to the internet. Everything has become available, so I think the element of surprise, seeing something live – is the best thing. Because it is going to be unique to that moment, no one is ever going to see it again. You can say that about DJ sets as well of course, but there are much more predictable elements, since everyone is playing the same tracks.

Recently you’ve released more music under your Echologist moniker, are you taking a rest as Brendon Moeller?

I think so, yes. It kind of just happened that people came to me and said we are really liking this Echologist vibe, would you do something for us? Or they wanted an Echologist remix. I think that sound resonates more with people right now, especially with the whole techno thing going on.

How important are these monikers to you?

They’ve just happened as a result of offering labels exclusivity with certain things. You know, when I first started recording music before the Internet killed sales of vinyls and CDs, there was money for me to do exclusive deals with good labels, like with Francois K’s Deep Space Media or Third Ear Recordings. These guys were paying me good money to exclusively release for them. Echologist and Beat Pharmacy were just names that were used for economic reasons.

Now I’m only trying to have fun with them, however someone once said to me that “names always evolve into things”, and now it is funny because Echologist has evolved into something that seems to have a sound and a style that is unique. But that doesn’t mean I won’t use my real name or Beat Pharmacy again.

Let’s talk about your upcoming album Storming Heaven. How did you get in touch with Prologue?

One of my friends, Mike Parker was working with them. I ran into him at some point, and asked him how things were with Prologue, and he had nothing but good things to say. So I got in touch with Tom via email (Tom Bonaty is the label owner of Prologue), and said I really love the label and at some point I’d be happy to do something for them. He was very receptive, so I sent him a few tracks, and slowly the first EP The Mechanics Of Joy took shape.

It is a very nice process. We had a discussion about music and the tracks I was doing. We were like ‘lets just keep going, lets see what we come up with’, and at one point I told him about my idea of an Echologist album, how I wanted it to be. Actually, the album happened very easily, very organically. I was pretty much free to do what I wanted.

What do you feel are the main concepts behind the album?

I took the album title from a book I read when I was 18 years old, called Storming Heaven; LSD And The American Dream which was written by Jay Stevens. It was a great book for me at that age. It offered a very educational look at the rise of drug culture and drug prohibition in America. One day, as I was getting toward the final stages of the album, somehow the book came into my head, and I thought that’s a great title.

I think Storming Heaven is a lot more eclectic and diverse, than the Brendon Moeller album titled Works I did last year with Electric Deluxe. Back then I was much more focused on trying to be this big room techno guy, and in retrospect I think I was a little too focused trying to do that. With Storming Heaven I was just letting the gears in my studio dictate.

How does the album differ to the rest of your work?

One of the record’s ingredients which features over all the tracks is a modular synthesiser I built myself. I basically spent a good 8 months to a year researching modular synthesizers and deciding what pieces I’d need, and trying to put together a system that I can take out on stage, and also can use in my studio. It is extremely powerful and very musical. And this has easily become my inspiration supreme. Whenever I come into the studio, this thing is loaded with possibilities and options creating sounds, sequences, basslines, atmospheres, noises and rhythms. So, that definitely featured heavily on the new album, and is inevitably going to be featured on everything that I do from now on.

There are tracks on the album like “Down The Rabbit Hole” or “Trick Of The Shade”, which feel very old school or nostalgic to me. What inspired you to go back in time?

It wasn’t so much a conscious thing. I guess the timing of this album has been good for me, because finally I had my studio set up in a matter that was perfect for me, and I felt that musically I was in a very good place. I also knew that I didn’t want to overthink it, so I would just come into the studio, start jamming and things would happen from there.

I guess it was subconscious that these 90s elements came out from those tracks. When I came to New York at the end of 1993, within six months I was going clubbing every weekend and I was completely in love with that sound. I think subconsciously that stuff is still resonating with me, because it had such a great effect on me at that time. When I do DJ sets occasionally, I really love playing those old 90s techno and house tracks, because to my mind they are still so fresh and timeless, and I try show people what was getting done then.

Last year if you came to me and asked what I’m trying to do, I’d have been pursuing this big room techno DJ role, because I thought for economic reasons it would be good for me to do that, and make it easier for promoters to be like ‘Okay, Brendon’s found his vibe, now we can book him, because we know exactly what he is doing, and we know what to expect’. But, that was a lie, and basically when you are not being true to yourself, it causes problems. Now It feels a lot easier, though now I get from promoters – ‘This guy’s all over the map, what do we do? Where do we book him, who do we put him with?’ But that is fine, that’s just what it is.

What’s next on the horizon for you?

Storming Heaven will be released on vinyl and CD plus digital in December and January. I’m also setting up some dates in Europe to promote the release. That will likely be February and March next year.

I also have some new 12” releases. There will be a new Beat Pharmacy EP on Fred P’s label, it will be jazzy house. Very sort of psychadelic jazzy house, groovy and very melodic stuff. You know, Beat Pharmacy is my love of dub, reggae, jazz and afrobeat. And finally, there is another new EP on Pomelo, this one is a Brendon Moeller EP, titled Reconcile and is basically a combination of techno and house.