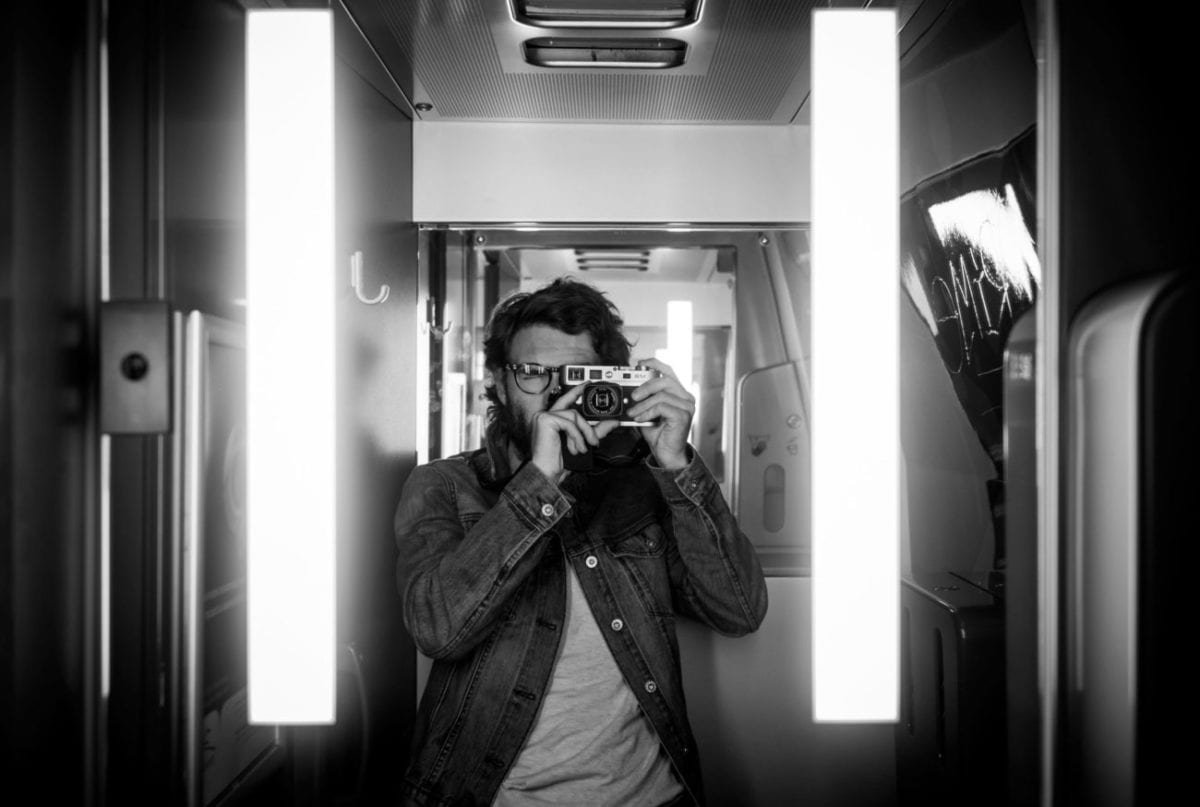 Boris Bunnik’s third full length album as Conforce marks a departure from his expected sonic template. In the last few years, he has established himself as a respected member of the techno community, with records that surprise at every turn. A solitary Conforce release can never be described as predictable, with each unknown entity having the potential to take you on an emotional rollercoaster or a primal abandon.

As if drawing a line under 2011’s “Escapism” LP, Conforce’s new album “Kinetic Image” sees the producer delve deeper into introspective forms, moving towards something more focused and deliberate. We spoke with Boris Bunnik to discuss his change in direction and the nature of its creation. He also discusses his new audio visual collaboration with visual artists ‘Current Current’.

Kinetic Image has been created without the dance floor in mind. Why did you go down this route?

As a challenge of my creativity and keeping what I do interesting. I wanted to make something coherent but still have a variety that tells a story, a deep interstellar journey that doesn’t need bangers or club beats to be compelling. For this album, what I had in mind was to make more floating, evolving, mental tracks. Slower than usual here and there, slowly unfolding more detail, drawing you in with a hypnotic vibe.

In the beginning it’s always about getting impulsive, letting creativity flow and creating timbres that are useful. It’s a flow of inspiration and eventually you end up with something that makes sense. It’s certainly an album process; there’s loads of spontaneous inspiration but you need to work towards some final consistent result, which isn’t a thing I define upfront. I love to be surprised as well, otherwise it’s no fun. Sometimes it’s good to dive deeper into your own sonic creative territory and say “for now, I just want to go out my comfort zone and push things a into a weird direction”. In that respect, sound design or gear is always a source for inspiration, also having less fixed arrangement and more impulsive tweaking.

Are you happy with the results, did you feel like you achieved what you set out to do?

As I said, there was no specific goal to be reached, just a moment where my creative process came to a point where I could make a selection of what really felt pure. Of course an artist is never completely satisfied but, for this, I came close to what I wanted to make, or what some artists will call perfection. Things are never perfect.

I spent a lot of time, over about six months, working out the tracks. Sketching, using different sound palettes, all to see what was coherent but retaining variety. Eventually I made a selection that I felt were the most personal and complete moments, not necessarily the most peaking or catchy tunes. I wanted to prevent myself from selecting club tracks for this project, to make it obvious or safe. I would rather make an EP for such purposes.

There is a setting for every track, I just wanted to get in a flow and lose all rational sense and just go with it. Maybe one track got more attention than another when it came to arrangement but the basic ideas were sound from the beginning. I hate to edit too much. In most cases it kills the original idea. It’s similar to photoshopping a bad picture until it looks unreal, you can just tell it looks wrong and you can tell in the same way with music. Usually. It’s not a golden rule but works in 99% of the time.

How did you go about producing the album? In regards to technology used and what a typical day in the studio was like?

Disconnecting from the world and sketching till dehydration. No breakfast and no daylight. Joke!

Often I am searching for the right combinations of tools in my studio, using gear in a new perspective. Also, as much as I thought there was so much hidden away in my hardware, I went back to a more digital post production process, using more computer based tools than on my last album, simply because it shaped the timbres and atmospheres I wanted to make.

There are always certain hardware tools I need but I wanted to go beyond standard song structures and chord based ideas, I felt I captured that on ‘Escapism‘. This time I did more sequencing with hardware sequencers than usual, it sort of pushed things in a different direction. Also using randomisers in a way so it still sounds structured or intended.

As I said, the process should be fun and the result less important; you’re stuffed away in a studio for a long time and the worst thing would be not to have had any fun. I’d rather have fun in the studio and make crap than make a 5 star reviewed album and not have enjoyed a single second of the production process. It’s very secluded you know, with just your own perception of what you’re doing you can easily lose perspective, so fun is essential.  You have to just lose it at some point to be creative. Like being in a dark room developing photos, getting high from chemicals and come out with unexpected images. It’s a pretty mental process and so is the album as a result. It’s certainly not as light hearted as before.

The techno scene is enjoying one of its most successful periods in recent years, have you been enjoying the current climate with more experimental mindsets?

Music wise I’m actually into different sounds but I love club music with some power, proper techno music with soul. I think abstract techno kind of had its highlight last year and there is a lot of the same old stuff coming out now. I think some labels did refreshing stuff at first but eventually killed it all by themselves by funnelling their artists and repertoire too much into the one direction. Variation in output is so important. I’m curious to see where it will go and what trends are gonna appear next. We’ll see.

Luckily there is a lot of cool stuff coming out; more experimental house music that is really quite effective and loads of small labels releasing more electronica and proper electro influenced stuff. Techno has my interest but I’m selective when it comes to playing it. I just like to keep my ears open.

After working on the more considered material in ‘Kinetic Image’, do you find you now have the urge to produce something absolutely hammering as a counterpoint?

Not necessarily. We will see, hahaha! There are some more club friendly but still deep productions coming up, plus some under some different monikers. The album is a separate project entirely, as is the A/V performance with Current Current.

So how did this partnership come about?

It was my agent who helped us come together as a creative team, also the guys from Graphic Surgery were quite involved in the beginning.

Patrik, from Current Current, was waiting for a moment to put all his effort in something he really believed in and could identify with. He literally said “this is the moment for me, I feel the music”. He’s really passionate and skilled, the guy wrote his own tools and software specifically for this.

How did the set go down? Did the album translate well for performance?

One hour felt like 20 minutes. This is usually a good sign. The venue was compact and laid back. When I looked back at the installation I was pretty impressed. Current Current did a great job for something that was set up on such short notice. There was some pressure to get it all working together; the music, visuals, but tight deadlines can really make things happen.

Structurally, I had to translate the album into a live set and with all variable tempos it was a nasty job. It pushed me to a different track listing and made me rethink how this could be built, getting the best combination with the evolving visuals. We’re gonna improve motion triggering, or Patrik is I should say! Separate more layers to be able to generate as much real time visual movement with all the layers of timbre.

The show was actually a bit of a test run, a real case of trial and error. I was quite impressed how synced everything was during the set. Of course there’s still work to do, integrate new material and getting better responses on the audio signals so it is even more spontaneous.

So yeah, I was very happy with the first performance result. It’s a new arena for me to explore but I felt I was ready for this step somehow. Ready to challenge myself more in cross media ways. At the end of it all, it’s nice to have full control over a setting and deliver something complete to people.

Do you find that now that music production, distribution and performance is so readily accessible, it is this sort of 360 degree approach of music, AV and album packaging that helps differentiate to the rest of the marketplace?

You have to be ready for this as an artist and you should never do it just for the sake of it. A/V is a specialisation itself, so it’s not just something you can take on offhand. I only wanted to add this medium to the package when it became suitable for the music and idea behind the music. Concept is a big word here; I didn’t just want to add a bunch of visuals and voila. It should take the album further into this total kinetic environment. I wanted this visual aspect to be as natural a fit as possible, not just for saying hey look, I’m doing a visual show! In this case, it’s been a positive and fits perfectly into what I had in mind as a complement to the track structures.

This is the first time I’ve collaborated and started to ask people to contribute their specific skills. I love to present a whole package instead of separate tracks. Single MP3 downloads have sadly taken hold so I try to offer something more coherent from time to time, to convince people a full album is not such a bad thing after all. I hope. But, who am I to tell how people should consume music in the end, so I’m just providing an option for them. What I do, I do with passion, if people buy into it I’m happy, fine if not.

What plans do you have for taking this on the road, anything exciting coming up?

We’re planning a few shows with the album A/V show, we’re keeping it fun to do and not making a routine, mundane activity. It needs the right space, setting and open minds, as it’s not a peak time club thing.

Besides this I’m still doing regular live sets and DJ sets. Got to keep a balance between them all to maintain the fun. I’m also up and running my own label with a friend, it’s called Transcendent and we just released my Hexagon alter ego EP called Blue Hour.

‘Kinetic Image’ is out now on Delsin available in vinyl, CD and digital formats. Buy a copy from Delsin.