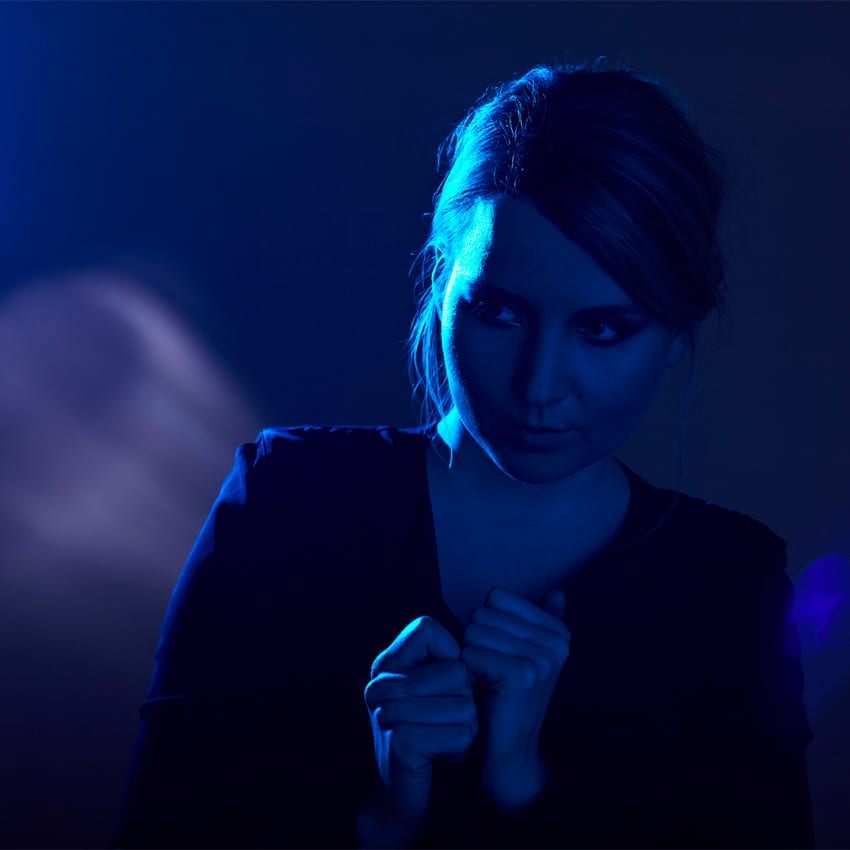 Sometimes the best music can be borne from times of hardships and darkness. From the punk movement to jazz and the UK grime, music can come from the socio-political – or circumstantial landscape – as well as it can from an individual’s heart. Electronic producer Clara Moto separated herself from her friends, family and existence to explore the ideas of separation and longing in her new album ‘Blue Distance’. Recorded for the musically gilded InFine Music, Clara explored her feelings and emotions in a melancholic fusion of orchestral atmosphere, meandering grooves and beautifully jagged beats.

Far from being part of that breed of extroverted, limelight-hogging superstar DJs, softly spoken Clara Moto carries herself in much the same way as her delicate, thoughtful but quietly powerful take on contemporary dance and electronic music. Clara caught up with Inverted Audio ahead of her album launch in London to speak distance of the heart, Agoria, collaborations with rappers and the creative fruits that come from being outside your comfort zone.

The title of your second album Blue Distance hints at a melancholic theme around the work as a whole – what personal attachments do you have with the album?

Well, between the two albums was a three-year gap. I was travelling a lot after the release of my first album and I didn’t have a real home, so I was quite nomadic and moving around the place. I had this whole ‘distance’ thing going on and I felt a large empty space – so the whole topic surrounding my album was distance.

In particular what things (or people) did you feel cut off from? And how did it affect the production of the album itself?

There were many things – family friends, relationships (and kind of relationships) and stuff. For every album I make I have a theme and the prevalent topic for Blue Distance was this feeling of separation from everyone. I also felt wanted to create that sense of distance between the listener and myself; I wanted them to feel some distance too, through the music itself.

Three years is a fair amount of time between the albums – how would you say you’ve developed since ‘Polyamour’, both in the way you work and the sound you’re aiming for?

It was a long time to work on the album as I started from scratch in comparison to the first album. But the whole process is the same as the first – it was me, on my own. Blue Distance is definitely less dance-floor and more home listening in places – it’s not very club focused to be honest. When I started the tracks I started at the same house tempo but I felt more comfortable with less BPM and more atmosphere. It was created in a homely space, very intimate and I think that this album catches that emotional, intimate atmosphere. I didn’t want to put myself under pressure to deliver anything that was expected, or to think I had to deliver more dance-floor tracks or whatever – it just came out of me naturally. There wasn’t any intention there really at all.

Are you critical of your work? And did this contribute to the creative process and the time spent recording the LP?

[Laughs] yes of course, very critical. I’m very strict on myself. I really can’t listen to my first album without getting too critical on myself… I would not call myself a perception though as I think there is no end to a track. You can always build and build upon it. Three years does sound long, but in a way it isn’t. Half a year touring and travelling, and then all the stuff from finishing up to release… I guess I spent around a year and a half on the album in total, but the criticism comes afterwards.

The album is full of luscious tapestries that clearly reflects your desire to diverge from the usual producer setup – when you recorded the album, how much focus did you place on instrumentation?

I did lots with my computer, most in fact, but I bought a few instruments and recorded them and also a little bit of live percussion. Plus I also used lots of field recordings, just to make it sound organic and I also used my voice. I see my vocals being more of an instrument because I don’t have a singing voice and I’m not a singer. However, I have some musician friends who also helped on some tracks. On for your love, my friend played drums and another played the Sitar and that was really cool. I really love the idea of having acoustic instruments, so I’m going to be looking more at that in the future.

Could this translate into a full live show, mixing electronic and acoustic instruments? What does your current live set up entail?

At the moment its just me with my computer, a keyboard and me singing – so it’s a little bit live [laughs]. But for the future I’m thinking of taking a drummer out with me when I perform, and maybe a bass player. We’ll see how that goes though, but as a recording artist Id love to work with more. My parents are musicians and they have a room literally full of all kinds of instruments that I’ve always wanted to play.

It also states that you’re a big fan of breaks-led music, such as hip-hop and broken beat; this aesthetic translated on to your album didn’t it? Do you think you will continue to revisit the genre?

I used to listen to a lot of hip-hop when I was young and I’m still really into it, listening to new trends in the genre all the time. I guess I just wanted to try something new, something a little different from house and techno beats. It was a new challenge for me… I’d love to continue to make hip-hop in the future – another dream is I’d love to work with a rapper! It’d be really different and to work together on a track or work with the voice. I didn’t feel the time was right before but now, you know….

Your label, InFine, have always taken a musical approach to the dance-floor and electronic music in general, so with your own musical approach, you must fit in with the label rather nicely… How do they help develop you as an artist?

They are great for me and they are so relaxed. They never tell me to make more dance-floor bangers, or tell me to make trendy sounding music, they just let me go and If I need their help I know that they are there with wise words. They are always very wise and the label manager is a really good A&R, so we had a really intense relationship during the making of the album, and that really helped me a through it a lot.

In the years that have passed many changes have also taken place at the label itself; has Agoria’s mentorship at the label helped you build confidence as an artist? How do you fill that void now he has left the label?

Yes I do feel more confident in music. Of course, Agoria had a huge influence and was a mentor to me and even though he’s not part of the family anymore, he is still in contact and gives me advice. I’m not the kind of person that sends their tracks to loads of people – I’m quite shy like that and I think it would influence my work too much, the opinions of others – so I just send to my label. As Agoria’s not part of the label anymore, I see him as a close friend, so his opinion as a musician is really good. He’s so precise about the advice he gives.

Now you’ve regained your distance so to speak (and returned from your creative cocoon) how are the next 12 months looking for you? Do you have more releases lined up as well as the developing live show?

I’ve got a remix EP coming out of Blue Distance and some more stuff. Ill have my live show set up and ready to go by next February too so ill be on tour for a good while again. Maybe in this time I will also find a rapper at some point , so I can record some new stuff!