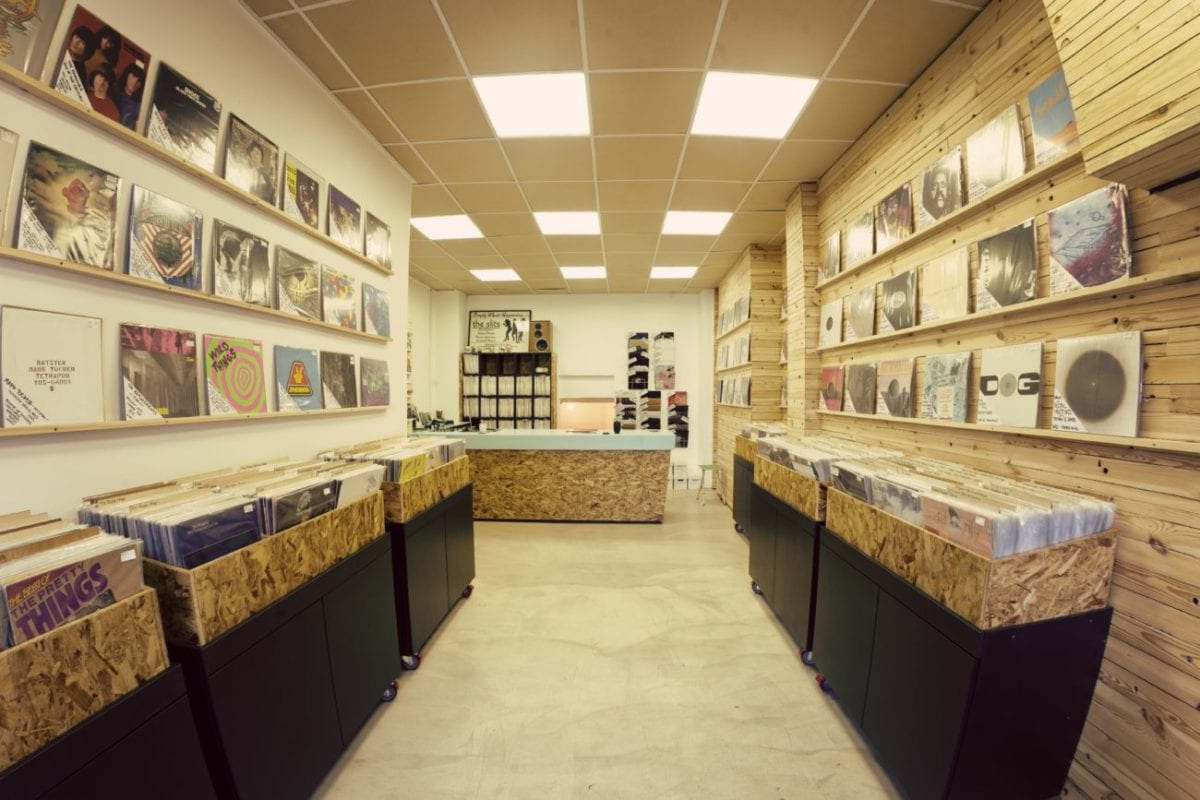 Kristina Records is a record shop on Stoke Newington Road in Dalston specialising in new and second hand vinyl.

Around the beginning of July a friend of mine told me about a new record store opening up in Dalston. I agreed to find out the address, I found their twitter profile and jotted down their address and we set off on our journey to discover the store. After a languid stroll across the border of where Hackney meets Dalston we reached Stoke Newington Road and within seconds we were standing outside a small yet perfectly constructed glass facade.

I stepped into the shop, introduced myself and started flicking through the racks. The one thing I noticed was how well categorized their selection was. Unlike other record shops, where the newest records are tacked across the walls and then renegated into a rack within a rack, Kristina’s minimally clustered shelves and refined racks allow you to pin point exactly what sound and style of music you’re after.

Being specialists in new and second hand vinyl Kristina have an exceptional supply of records, I was lucky enough to pick up an original 1995 Metroplex pressing of Model 500’s Starlight M69 with a Moritz (Von Oswald) Remix on the flip, a record which I never thought I’d own. My friend was also able to tick off 7 records on his Discogs wish list in a single visit, picking up Pépé Bradock’s ‘6 Millions Pintades EP‘ (2000) and ‘Un Pepe En Or (Vol. 1)‘ (1997).

After such a successful visit and experience like this it seemed only natural that I found out more about the people behind the store and what provoked them to open a record store in such ominous financial times.

Firstly can you please each introduce yourselves and tell us what you’re currently up to?

We’re Jack, Jason and James.  This week we’ve been receiving the first batch of new release stock, which is pretty exciting for us as we have only dealt with second hand stuff up till now.

Where and under what circumstances, did the three of you meet?

We met about 8 years ago now. We all worked together at another London record shop.

What jobs did you each have before opening Kristina Records?

The three of us spent many years behind the counter of a well known, London based second hand record shop.  James had been there for a couple of years before I started and Jack came on board not too long after that.

There’s no doubt that the current economic climate in the United Kingdom does not bode well for the arts and entertainment industry. There have been countless articles focusing on the demise of the major powers within the industry, let alone small independent record stores. What was your reasoning behind opening up the store?

Having worked in the industry for many years we know that it can very much be a viable, profit making business if it’s done correctly.  We knew we had many years experience dealing with second hand records in a retail environment and this would be invaluable.   We could see that there was certainly still a market for vinyl and wanted to offer something a bit different to what already exists in London.

For the past 10 years East London has become a hub for creativity. Apart from this what attracted you to open the store on Stoke Newington Road?

I guess we could see the gentrification happening in the area.  It’s a bit of a dirty word, but maybe even as little as 5 years ago it might not have been viable to do what we are trying to do in Dalston. It had occurred to us that while things were changing in the area there was a significant lack of shops catering for this new demographic.  We noticed one or two popping up, noticeably Pelicans & Parrots next door, so we could see that it was starting to happen.  This helped give us the conviction that we were making the right decision.

When I first visited Kristina, the one stand out feature that I noticed was your exceptional categorization of records within the racks. Who’s behind the sorting and ordering of records?

We all are!  Jack and James take care of the more rock and indie side of things, I do all the dance stuff.

For me it was about showing that we’re passionate and knowledgeable about the music we’re selling.  By grouping together certain artists or labels or sounds this hopefully lets the customer see that through the way it is presented.  It relies on the customer having a decent knowledge but I think that most people who come in have that, and that’s the way they would want it.  We also hope it works in a practical sense by making it easier to shop and find the things you’re after more quickly.

Currently you’re focusing on the sale and exchange of second hand vinyl. Why are you not importing and selling new records?

We are and will be doing it a lot more over the coming months.  We all love new music and part of the reason we wanted our own shop is so we could stock and support current artists and labels.  The new stuff will be generally in keeping with the kind of stuff we are stocking on the second hand side of things.  I think there is definitely a bigger crossover now than for a long time of people buying both second hand vinyl and new releases.  We hope that eventually it will be something like a 60/40 split second hand and new.

What’s behind the name ‘Kristina’, and what was the shops previous function?

I think the shop used to be an estate agents, boringly enough. The shop is named after a special someone. We wanted a name that wasn’t too macho and has a bit of mystery to it.

The interior is a hybrid between Swedish minimalism and a rustic log cabin. You’ve employed chipboard, concrete, white paint and an exceptionally swish cobalt blue Corian worktop for the shops counter. Who’s behind the stores design, furniture and shop fitting?

The shop was designed and fitted out by a good friend of ours Paul Corcoran for Arris London.  Most second hand record shops have a certain feel to them and we hoped to do something more contemporary, we very much wanted a bright, clean and well organized space to trade in, something that felt more European or American. Records are beautiful objects they deserve a to be seen in a sympathetic and well designed context.

It’s clear that working at Kristina is more than just a job for you all. What’s your musical heritage?

Jason: I seriously started getting into music and buying records heavily when I was 19 I guess.  Lots of trips to Soul and Dance Exchange in Notting Hill Gate (where I eventually managed to land my dream job!) buying stuff right across the board music wise.  I ran some small club nights at the end of the 90’s and early 00’s and had a residency at a night at the now defunct Key in Kings Cross.  In 2003 I got a job in a second hand record shop and over the following 8 years learnt a hell of a lot about music.  Got some okay records too!

Jack: I went to my first gig (Pavement and Sonic Youth at Brixton Academy) in 1992 thanks to a clued up older sister and have been hooked on music and buying records ever since!

James: My dad is a collector so there were always been records around the house. I started going out to gigs and clubs at an early age and graduated to working at Hairy Records in Liverpool and haven’t looked back since.

Currently you only stock vinyl records, what’s your opinion and attachment to this medium?

Jason:  It’s all I’ve ever really bought and played.  From a DJing point of you I’ve never considered using any other format.  I’m not into technology that much and I like the physicality of playing a record…you can’t replicate that in an authentic way.

Jack: Records carry memories, ideas and emotions better than any other format.

James: The romance of it I guess… the sound of them, the feel of them.

How much time would you say you’ve invested into the store? Would you do it all over again?

Too much and yes.

What do you have planned for the future?

Increasing the shops profile.  Getting in more new stock.  Having more in-stores (we have Hieroglyphic being playing in-store on 8 August).  Getting our website properly up and running so we can sell on line as we are currently only really a blog.

Whenever possible eat at Juniors and order the stew fish.