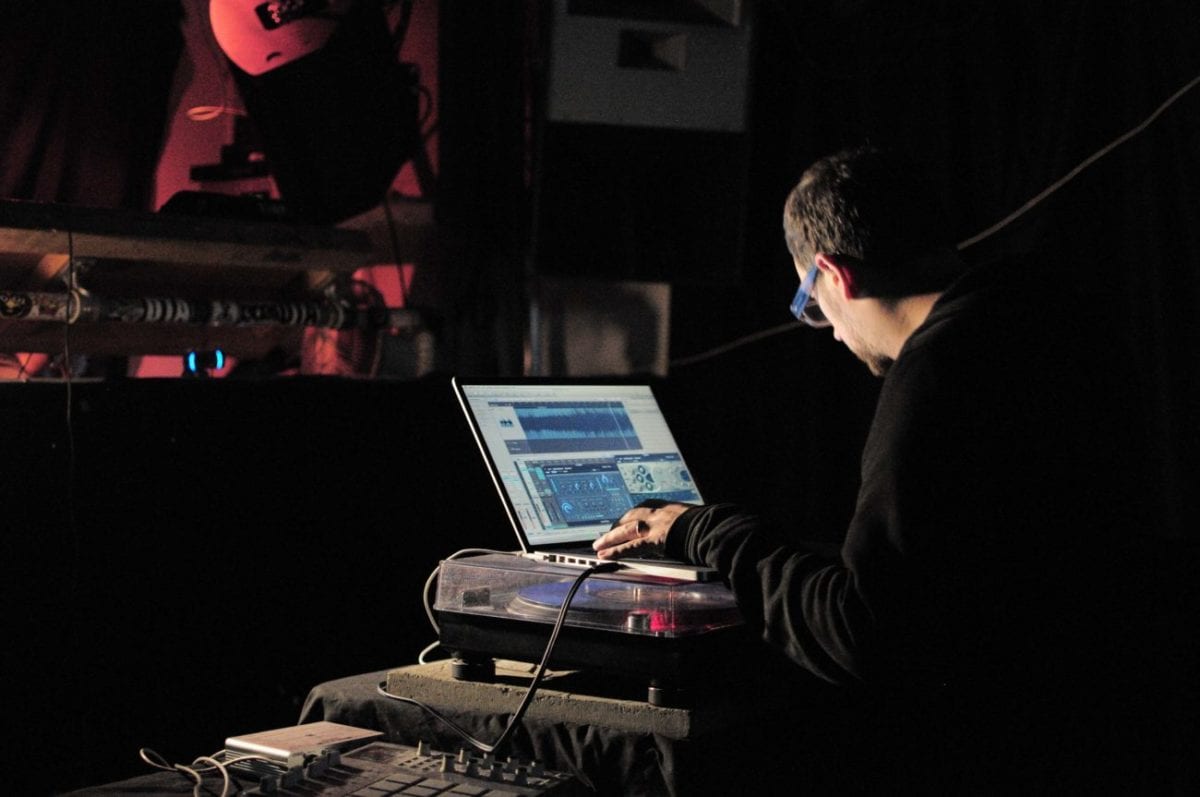 Last month during a swathe of developments at Inverted Audio, we caught up with the man behind ‘Planet Mu’, Mike Paradinas, to probe him about the formation and success of his forward thinking label. In a conversation that covers 20 years of music, from Breakcore to Footwork, via Dubstep / Garage and meandering off topic to Wiley and LSD… You should find plenty of interest.

Mike has also provided a live recording of an early u-ziq performance he did back in 1994.

“This is one of the first live sets I performed off an Atari computer sequencer with outboard synths and drum machine. This was around the first couple of months of 1994, just a few months after Tango N’Vectif came out as I recall. Recorded at ‘Pure’, The Venue, Carlton Rd, Edinburgh.”

IA : PLANET MU BEGAN AS A SUB-LABEL OF VIRGIN RECORDS, WHAT WAS THE ORIGINAL CONCEPT?

I don’t really know. At the time, I was signed to ‘Hut Recordings’ who in the mid-nineties were releasing indie bands like ‘The Verve’, ‘Placebo’ and ‘Moose’. They (Virgin) wanted me to come out on an electronic label, rather than Hut and asked me what label name I’d like.

IA : SO THEY GAVE YOU THE OPPORTUNITY TO RUN A LABEL?

Not exactly. Technically its called an ‘imprint’ which was releasing my music. I wasn’t allowed to release other people’s music on the label…

IA : THEN PLANET MU WENT INDEPENDENT FROM VIRGIN A FEW YEARS AFTER CONCEPTION. DID YOU HAVE A VISION FOR THE LABEL THAT WASN’T BEING FULFILLED?

I started the label independently from Virgin Records in 1998. It happened organically really, there were artists I wanted to release and I was friends with distributors so the opportunity presented itself. It’s semantics, I was still signed to Virgin on ‘Planet Mu’ the imprint, but the label itself didn’t exist properly ’til this time.

IA : YOU USED TO PRODUCE AND PLAY A LOT OF YOUR OWN MUSIC, PUTTING OUT AN ALBUM ON ‘REPHLEX’ AND WORKING UNDER A HOST OF DIFFERENT MONIKERS. WHAT DID YOU DRAW INFLUENCE AND INSPIRATION FROM?

Well I’ve been doing it for 20 years now. I get inspiration from music and things that happen in my life I guess. Back then (92’/93’) it was the rave scene, pirate radio, hardcore, Carl Craig and Detroit techno all had an impact.

IA : THIS WAS A TIME BEFORE PRO TOOLS, VSTS AND ELABORATE SOFTWARE WAS DEVELOPED. DID YOU HAVE A FEW FAVOURITE BITS OF KIT AND SYNTHESIZERS?

I had what I could afford, maybe not favourite but I learnt how to use them well. That’s what went out on the first few records I released, and gave me a sound. I didn’t even have my own computer really and had to borrow other people’s to sequence the music. I used stuff like the ‘Roland D50’, ‘Yamaha DX11’ and drum machines. I still used digital synths because the analogue gear was even expensive back then, and heavy!

I do now… I took a break of about 5/6 years because of not being inspired and having so much to do with the label. Its a project with 2 other people, I suppose you could call it a band and we’re planning to release material either at the end of this year, or early next. We’re just having fun with it, not experimenting too much, just drawing on different influences like house, disco and 80’s grooves. Next step is getting them vocalised as the tracks seem to suit it.

IA : COLLABORATING WITH APHEX TWIN (RICHARD JAMES) IN THE 90′S MUST HAVE BEEN A FUN PROJECT. HOW DID THAT COME ABOUT?

It was his idea I guess. Whenever someone visits Richard I think he always takes the opportunity to record a musician. I know he recorded and released some material with Cylob, Luke Vibert and Squarepusher, but I think ours was the only album he put out… It was good times, influenced by taking acid and getting drunk.

IA : ARE YOU STILL IN TOUCH (WITH APHEX)?

Yeah, we speak occasionally… He’s an intelligent person to talk to, a very chess playing sort of mind. I can’t see things the same as him, so its always refreshing to hear his view point.

IA : OVER THE YEARS PLANET MU HAS ESTABLISHED ITSELF AS A LABEL WITHOUT CONSTRAINTS, WHAT’S YOUR APPROACH TO ‘A & R’ AND SIGNING ARTISTS?

Well, I’m always looking for a sound that’s exciting and fresh, and I try and apply that to the A & R process.

IA : MANY MIGHT NOT BE AWARE OF THE EARLY CATALOGUE WITH LANDMARK ARTISTS LIKE LUKE VIBERT, VENETIAN SNARES AND THE HARDCORE / BREAKCORE / JUNGLE PRODUCERS HELLFISH, SHITMAT, DOLPHIN & THE TEKNOIST… AT THE TIME, WERE THEY SOMEWHAT OUTSIDE THE STATUS QUO?

Yeah. Hellfish and Producer felt like a possible route out of Hardcore/Drum’n’Bass… I’d heard the sound but it took a while to find them and get it released. When I was DJing, I needed something to go to, and Jungle and Drum ‘n’ Bass weren’t really doing it for me, this was. Saying that though there’s a majority of Breakcore that I’m not interested in.

IA : WHAT ABOUT THE LUKE VIBERT CONNECTION?

Well we were friends from the ‘Rephlex’ days… I heard some tracks round his house and wanted to release them, which went on to being the first couple of EP’s. I’m still lucky enough to be working with him to this day.

IA : PLANET MU WAS ONE OF THE FIRST LABELS TO PICK UP ON THE DUBSTEP SOUND, BEFORE IT WAS REALLY DEFINED. HOW DID YOU FEEL ABOUT IT AT THE TIME?

It was exciting… I was into the 2–step and speed garage that was about and quite established with artists like EZ, Mark ‘Ruff’ Ryder and Strictly Underground Records. The early Dubstep was coming from the likes of Horsepower Productions, and Turn U On but it really kicked off with DMZ as a defining moment. To be honest I really wanted to put out some Grime but all the producers and MCs wanted to get signed to the Major labels. I’d tried to put out Wiley’s instrumentals so many times but he’s mental.

So in effect I aimed for Grime and ended up with Dubstep as the producers were keen to get released and the music was good. The MRK1 connection was made and went onto consist of collaborations with Virus Syndicate, while ‘Vex’d’ interested me with their single minded approach.

IA : RECENT STAPLES TO THE LABEL HAVE BEEN THE LIKES OF BOXCUTTER, FALTY DL, ITAL TEK AND TERROR DANJAH. WHAT ELEMENTS OF THEIR MUSIC ATTRACTS YOU?

Falty DL – It was the melodies and groove of his tracks. He had this really nice slinky swing and interesting ways of working with vocal samples. Now it has evolved, into dance music that is unselfconscious, and still new sounding.

Terror Danjah – I’d been buying his grime records since about 2003 or so and just really wanted him to get some recognition. At the time we’d tried signing Joker, but this actually felt like a better alternative.

Boxcutter – Barry I’ve been in touch with since about 2002/3… He was sending me this Squarepusher influenced ‘Drill’n’Bass’ for want of a better word. He started making Garage a little later around 2005 and after hearing the material he had lined up for Hotflush, we agreed to put out his first album. He’s now doing something completely different.

Ital-Tek – He was a friend of a friend, and now we both live in Brighton we meet up occasionally. He’s come on a long way I think… His new material which I haven’t released yet is very exciting. I wasn’t so keen on the recent album, a little derivative but interesting melodically. Yet I knew he was on the way to something, and think he is getting there now.

‘Juke’ has been around for a long time now, and footwork is an evolution from that scene. No one’s really played it a lot in the UK except Headhunter, Mark Pritchard, me and a few other people. I like the rhythm, it’s very syncopated and incredibly funky at this 160bpm tempo and not a lot has not been released lately with this sort of energy. The way the synths and samples are used is very brutal and I enjoy them in the way I used to enjoy old hardcore. It has that same feel to it with the pitching of samples and repetition but works in a different way to Jungle or Hardcore.

I have to draw a distinction between ‘Footwork’ and ‘Juke’. ‘Juke’ doesn’t have the same rhythm and syncopation that ‘Footwork’ has. It’s much more  4/4 party music… whereas ‘Footwork’ is music for dance battles.

IA : DO YOU THINK IT WILL TAKE OFF IN THE UK?

I have no idea and I don’t really care to be honest. I’m playing it and releasing it… I know the likes of Flying Lotus and Machinedrum are playing it in the States and its cropping up more and more in DJ sets. People don’t know they’re listening to it often, and like you said, there is a lot of shit about and it is lo-fi at times.

IA : WHAT ARE YOUR TOP 5 RELEASES ON MU OVER THE LAST 12 MONTHS?

I like the footwork ones ,the DJ Roc album and the DJ Nate album… Other than that, the Tropics, Oriol and Solar Bears releases were pretty great. We’ve got an album coming from Tropics along a similar strain as the ‘Soft Vision’ release…