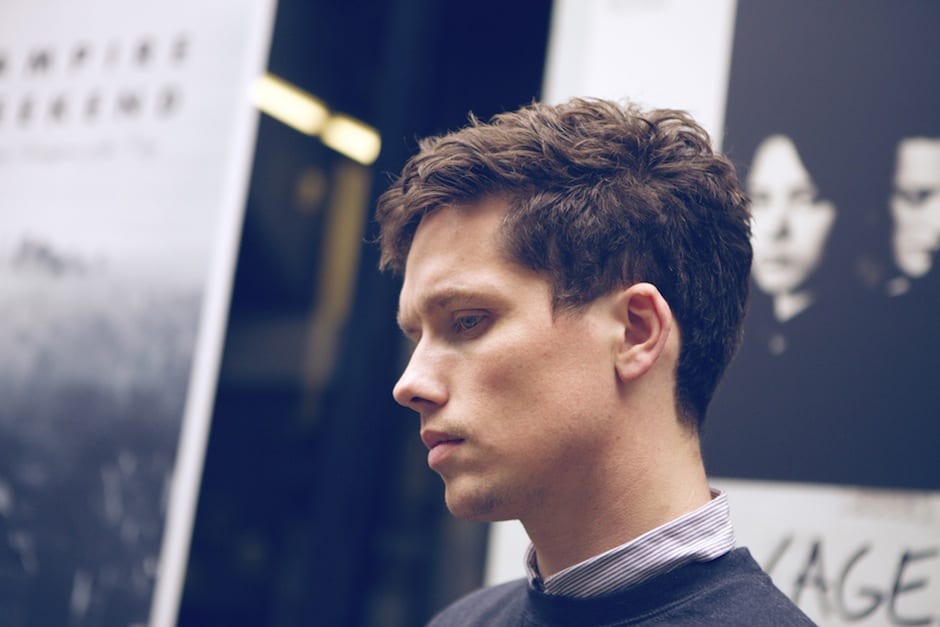 Ahead of Powell’s DJ set tonight at Plastic People for Behind This Wall, we sat down with Oscar Powell to discover more about his unique approach to creating music, Diagonal Records, his studio set up, working with Regis and the legend that is THAT sound system at Plastic People.

Powell plays from 11pm to 12:20am. For further information please check the Inverted Audio event page or Facebook event page.

What’s up! I’ve had a difficult few months of intense work and no time for music which has made me mad. Christmas can’t come soon enough. I need some time with my dog and my lady.

Your sound is very unique – what’s your musical background and what would you say inspired it?

It’s almost impossible to answer that, I think, because it’s not like I consciously set out to reference certain things in the music. It’s just the way it comes out. I like energy and rhythm. I also like things that make you feel kind of uncomfortable. In terms of specific influences, hopefully a few of those can be found in the music itself.

A lot of outlets have tried and failed to pigeonhole your sound this year – is this something that you find pleasing or something that surprises you?

People can categorise as they please. I’m cool with it.

You seem to be frequenting a lot of end of year lists – do you buy into that hype or try best to ignore it?

Anything positive that’s been written or said about the records is great to hear, and it’s been equally good to get the support of people I respect and admire. Building relationships within music is one of the best things about putting out records. I wouldn’t call it hype, though — just one or two people who have written nice things.

There are a lot of ubiquitous qualities to much of popular ‘underground’ club music at present. I feel your records almost stand as a bastion against this wave of, well, shit. Is there anything conscientious about that in your production process?

Yes, because I choose to make the music this way. But it’s not a deliberate stance against conformity — it’s a way for me to explore what interests me. Music is a way for me to create something I care deeply about. I guess it’s different to a lot of stuff out there, and I am naturally drawn to artists who explore their own thing, but I love more familiar strains of music too.

How do you get your sound?

There’s a lot of talk about process in music, and for some artists it’s a critical part of the whole package: understanding that component enhances your experience of the product. For me, it’s not something that really needs to be delved into too much. I prefer people to try and interpret how it was made. I like the unknown thing. I think it makes the music more interesting — this awkward thing when you’re not quite sure where something’s come from or how it was constructed. I want it to feel random and surprising like that.

I use a Tom Oberheim synthesiser module for a lot of noise and fizzy lines and sample a lot of drums. I’m also in the studio tomorrow recording live guitars and a drum kit we’ve set up in an abandoned skate park. I’m grateful, too, to a friend who works at a studio where they’ve got a beautiful old Neve desk and racks of vintage stuff; it’s where I do the final mix of all my stuff and I love what it does to the music.

Where do you stand on the analog vs. digital debate? Do you think ‘that’ analog sound is attainable from working inside DAWs?

I don’t know, really. It’s an old debate but I’m not sure it’s important. Everyone knows analog is brilliant but it’s not necessarily better. Digital is there to be embraced too. Look at Raster-Noton. Their output is of our time because the music runs with digital rather than rallies against it. The cult of the machine says that music made outside of a computer is somehow more authentic than music that’s not. Both are good. As for obtaining an analog sound from a DAW — yes, it can be done. You just have to learn how to do it.

You also work as a graphic designer – do you like to take responsibility for all the output on Diagonal?

I’m actually in advertising, not graphic design, although design is obviously a big part of what we do. I like making things look good, but I don’t take sole responsibility for the sleeves I’ve done so far. I work with brilliant people during the day who have helped me with the records.

Is Diagonal just intended to be an outlet for Powell tracks or do you fancy yourself as a budding A&R man?

It was never intended as an outlet just for me, but it’s just taken a long time to find someone I want to work with. I have such a clear image in my head of what I want the Diagonal output to look like that it’s tough finding the right fit. But there is something coming early next year from a band called Blood Music who I fell in love with after seeing them live a few times.

How special was it for you to have Regis do a remix on your first record?

Brilliant. Karl knows how grateful I am for that. He’s a good man.

Keeping with the Behind This Wall vibe, what record means the most to you, if you had to pick one?

Fuck. I couldn’t possibly pick one. It’s hurting my head just thinking about it. I picked up an old UT 12” recently that I’m extremely happy about. It’s got Sham Shack and This Bliss on it. Incredible.

What does it mean to a London producer/DJ such as yourself to play the sound system at Plastic People?

Some friends of mine and I used to spend hours and hours camped out by the speaker stack that was back right next to the old booth. It’s nuts, and I never once thought I’d get a chance to play there myself. I can’t wait. Although I had heard rumours of the sound not being quite so good in there anymore.

There’s an EP coming on Boomkat’s Death of Rave imprint in January. Then something else should follow in February or March on another label, but I don’t want to say too much in case it doesn’t happen. Then there’s Blood Music on Diagonal in February I reckon.