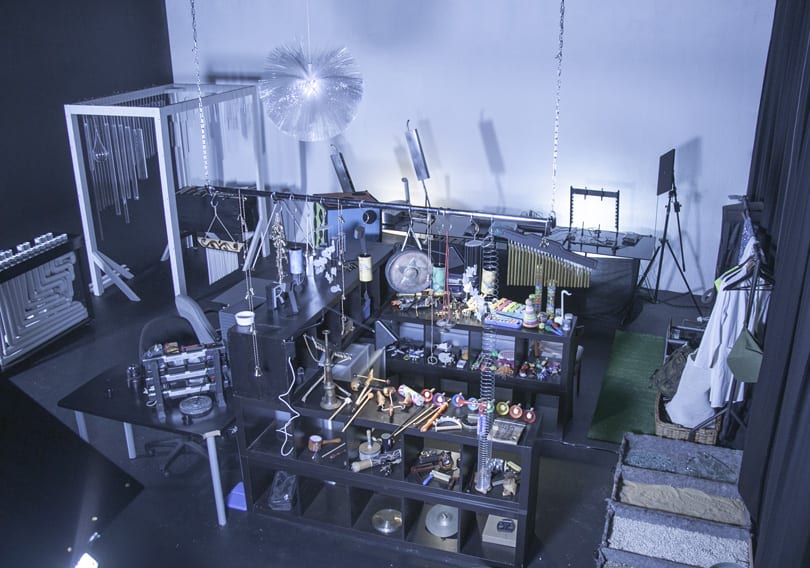 Firstly can you please each introduce yourselves and tell us where you’re from and what you are currently up to?

Andrew – I was born in London but my roots are from Sweden / Scotland. I’m currently running Radium Audio, which is a music and sound design company that I founded, as well as being the tip of the spear for our edit music collective Dalston Pony’s.

What’s your musical heritage? Where did this passion for creating sounds and music stem from? Is there anyone / thing in particular that inspired you each to start experimenting with sound?

Andrew – My musical journey began back in 1983 with Electro and early Hip Hop first bought on C90 cassette. I then got turned onto early house music between 1986 -87 and acid 87-89. Then UK bleep in 89-92, Detroit techno in 1990-93. My passion for creating sounds started with pause tapes and using double cassettes to dub over edits and sounds onto mixes, DJing naturally followed this progression.

I met Johan, who’s worked at Radium Audio since 1992, back when he had a studio in Stockholm. Naturally we hung out with one another experimenting with sounds on his synths. He also had a Moog System 12 and an Otari analogue tape machine as well as a variety of other analogue electronic instruments.

In 1993 I went to EMS in Stockholm which is a recording center for professional composers working with electro acoustic music. I then went to Manchester to study a masters degree in HND & BEng within Electro Acoustics, after which I went to IRCAM (Institut de Recherche et Coordination Acoustique/Musique) in Paris.

Andrew, you used to run a record label as well as import records from the USA, more specifically Detroit. Can you please expand on this and tell us how this venture developed and what you love about the Detroit sound?

Andrew – ‘Surface Elements’ was a record shop that I opened and co-ran with a colleague of mine in Stockholm back in 1992. We contacted and concentrated our efforts on the Detroit sound. We imported records from Detroit on a regular basis and frequently dealt with ‘Record Tyme’ and ‘Submerge’. We regularly spoke and worked with Mike Banks and Carl Craig, Dan Bell, Juan Atkins at Metroplex and Dopplereffect.

The Detroit sound is basically black dance music as it was with the electro sound, which isn’t a million miles away from the electro-acoustic and musique concréte I studied.

The record shop was a wild card and I was only 22. I had a lot of fun importing records, but realized we only sold a handful and not enough to survive. My experience running the shop gave me an unparalleled insight into the music industry and helped fuel my undying passion to continue in this business domain. It also helped open me up to other peoples musical appetites.

What is Radium Audio? What’s behind the name and what exactly do you do?

Radium is a cool phonetic sounding name for what we do. I wanted something that wasn’t too long and had a sound that was right for us, and that reflected our exploratory nature and the scientific elements in what we do.

You’ve worked with an array of clients such as Coca Cola, MGM, BskyB, Bentley, Ferrari and Nokia. Each of these clients demands specific attention and results, which clients and projects have you had the most fun working on / most rewarding to work with?

Radium’s take on everything is to record everything from scratch. When we worked with Ferrari and Bentley we got to drive their cars at speeds of 210mph. The cars are often prototypes so anything we do with them is highly rewarding as not many people get to drive them! For MGM we traveled to Africa to record a lions roar, this is without doubt the most important part of the ident.

In terms of reward, there are many aspects to it. For instance working with new creative employees who are focused on what they do is also very rewarding as they are dedicated to learning new techniques and ideas. I get a lot of satisfaction from helping them explore that world and expanding their skills.

Adding sound to a brand is essentially reinforcing that brands presence and depth. Capturing and recording these sounds must be time consuming. What projects have you worked on that have made you think twice about sound design and have made you travel to unexpected locations?

Andrew – I’m only going to reference Radium here. Brand sound and so on is a massive area, what we are primarily interested in is brand experience be it sound or otherwise. If its sound we leave no stone unturned, we travel to Africa, South America, central America and so on, for sound is something we are passionate about.

Capturing sound for projects is key to our core ideals and we have exotic microphones to do the job, including a microphone designed to capture the heartbeat of a snail. We also have underwater microphones, ceramic microphones, contact microphones designed in Los Angeles by Hollywood sound designers. Being able to turn a microscope onto a sound source is a thrill and its something that is a craft in its own right. In the current digital age we are very old school with our interest in recording all our sounds.

What is your philosophy on sound design?

Sound design is a craft that comes from recording and designing your sounds from scratch. Our sound designers create new sounds for each project. Some of these are only used once in a project and that’s great as we have Terra-bytes of unused material.

Since starting up Radium Audio, what have been the most significant highlights in your career?

I would say one of the key highlights is understanding a lot more about people and how people operate. It’s been an eye opener and a journey that I wouldn’t trade for anything else. I learnt so much now and I’ve enjoyed learning from some of the best minds in the industry.

Over the years you must have witnessed a dramatic shift in technology, hardware to software, what is your opinion on this change and how has it benefited / effected your work?

Hardware as well as software is part of our craft.  Software and its tools are often used after mindset, not before. If you have a designers mindset it doesn’t matter what you use, its all about original ideas. John Lennon said in an interview with Rolling Stone “I’m an artist, and if you give me a tuba, I’ll bring you something out of it.”

What events led you to dream up this idea to create the Laser Harp and how much time did you invest into the project?

I saw some hand gesture performances within the electro-acoustic music world. I liked the idea of using my hands to control music as well as the original Jean Michel Jarre concepts from the 70s and 80s.

When it came down to the design and manufacturing of the Laser Harp, who was responsible for its looks, functions and production?

I led the inspiration and ideas and Johan led the design & manufacturing. The Laser harp is still being improved and is I suppose in a constant state of flux.

What environments would you like to see the Laser Harp used in / for?

I would like to see people like Lone or Space Dimension Controller on stage with it. Renaat Vandepapeliere from R&S Records is due to come over and hang out in our sound lab soon, so perhaps if R&S adopt it who knows!

Having set up Radium Audio from scratch, what words of wisdom do you have to share?

Do it from scratch, don’t copy anyone, be ethical and mindful of your long term industry relationships. Don’t re-dub films from the internet, don’t assume anything, if you are going to do it.. then do it from nothing that way its genuine and authentic.

This is an approach which we have stood by to this day. People are cool when you meet the good ones, keep hold of them as they are your network of creative and technical people.

Its all way to easy to download stuff, assimilate things you absorb, but the ones who last are the ones who actually do stuff from scratch and keep it authentic. Radium is highly motivated to sound and all things sonic regardless of the brands, clients and how famous we are. We still buy records and synths by the bucket loads and we still get very excited about new music. We’re still DJing and remixing. We also run a collective of DJs, sound editors, remixers, music producers, called Dalston Pony’s. We take the latest promos and edits, we trot all over new mix, bootleg, mash up and give new love to the most current house mixes
adding a new fresh take on dance music with an attitude that is all about the party and fun.