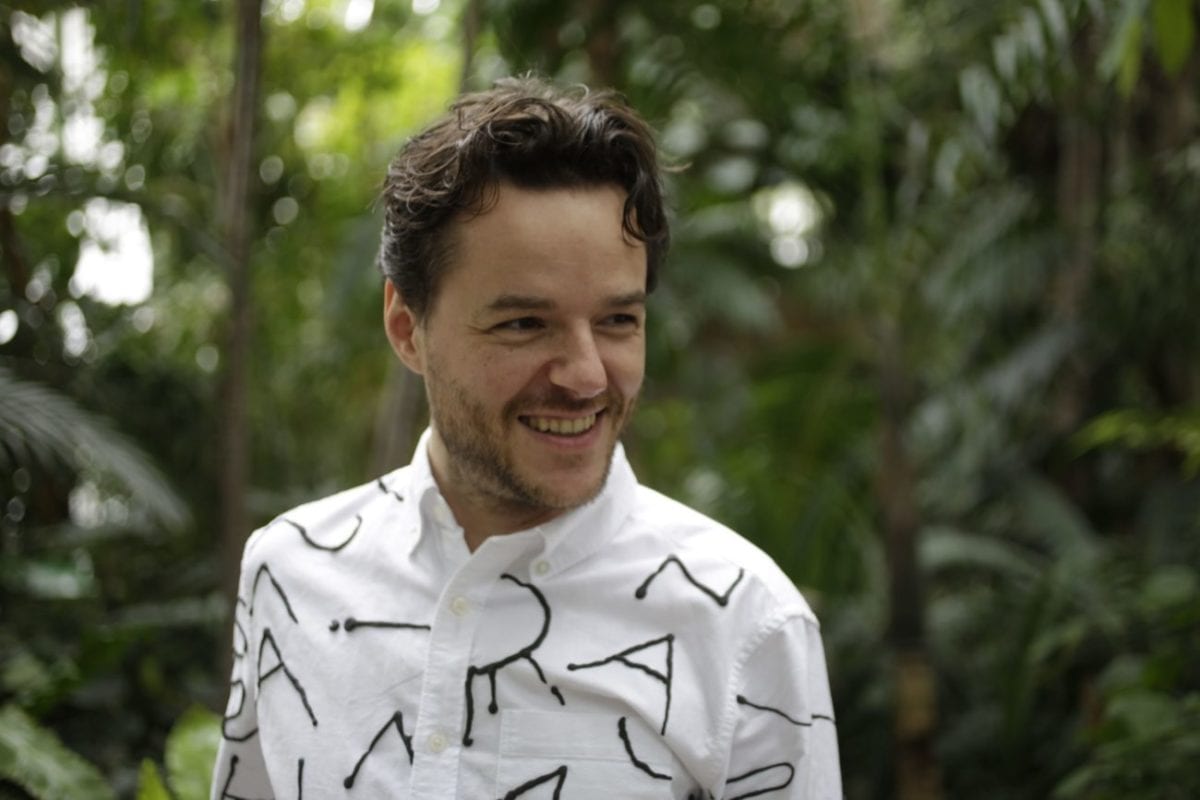 Matias Aguayo is one of the few artists that can nowadays claim true originality in the music they make, offering a unique vision that since his first inception has been challenging the common expectations on electronic music performers and composers. Whether it be curating music events, overseeing the tremendous Cómeme label imprint, and most recently joining Warp’s favourite New York band Battles as a vocalist for the lead single “Ice Cream”. He now returns to Kompakt with his first new recordings for the label since 2009’s acclaimed full length “Ay Ay Ay” – an accomplishment of its own right thanks to the fact that it was created almost entirely with samples of his voice.

Where are you and what are you currently up to?

Yes, at this very moment I am in London and about to travel back to Berlin, which has become my base since December. It’s the summer now, it’s the time of many gigs and festivals in Europe. I am staying here now, but I always have to go back and forth between Europe and South America. Also some of the artists on the label that I run with  Gary Pimiento “Cómeme” are in Europe at the moment:  Diegors, Daniel Maloso, Ana Helder and Rebolledo so hopefully I’ll get to play alongside them.

You’re originally from Santiago, Chile. You then moved with your parents to Cologne. What events led you to move to Cologne and how did this affect you personally?

My parents had to leave Chile because of political reasons, they were organized in left wing parties and the fascist dictatorship was not a place to continue living for them, so I grew up in Germany, mainly in Cologne, lived in Peru in-between and also in Buenos Aires and Paris.

Obviously these various backgrounds and environments have affected me as I don’t really have a geographical home-place. It’s my love, my family, my friends, spread all over, and obviously the love for music. Maybe I should stress that Cologne was very important for me, although I had started music before, that’s the place where I got really involved in doing music, in the 90s.

Techno music felt like the place to be for strangers and aliens, and there is also like the start of an own dance music language which is very much related to parties we did alongside Christian S, creator of  “Jagos”. Something started growing there that now involves a lot of musicians from different places, from the London based Capracara to Ana Helder from Rosario, Argentina, from Daniel Maloso from Monterrey, Mexico to the Russian Philipp Gornachev and Rony Douglas, there is a whole context evolving of people sharing a similar musical spirit, and traveling and having lives in different places obviously has to do with that.

What’s your musical heritage? What was it that provoked you to start experimenting with music and why do you create music?

Music has been there always, I think a tape recorder I owned was the very initial inspiration. Being able to record my voice, listen to it again, record other things, like stories, improvised songs and so on. I’ve been doing that ever since I can remember and I feel a connection to that initial impulse. I developed it further, but in the end I am doing the same thing.

You’re renowned as a traveler ‘a citizen of the world’. Clearly your surrounding environments influence you, what environments have had the most significant effect on you and your work?

There’s been many and there will be a lot more. It’s complex, as on the one hand I really believe I grew up in Cologne musically, but considering I have lived in Buenos Aires and that I already have a very Latin background in music I think that it wasn’t until I rediscovered Santiago, which led to collaborations like the ones with Diegors. So I can’t really tell. But in collaboration we created the Cómeme platform, which works like an environment for more and more people to get involved.

Let’s move onto your current single ‘I Don’t Smoke’ and your forthcoming album? Firstly do you smoke, secondly how long have you been working on this project and where have you spent the majority of your time working on it and with whom?

It’s Rebolledo who says that he doesn’t smoke, repeatedly, so that’s the name of the track. It’s an anecdote, an anecdote of touring from disco to disco. The whole 12″ is something like that. I’ve been recording it on my way, sometimes between the gigs, out of the necessity of having something to play. There is this thing in common on all those tracks. To say how long I’ve been working on them is difficult, as when I’d say I worked one year on it, it could be misinterpreted as, I’ve been working everyday since one year on it or something like that. But no, I did the rhythm, then next week I played it in a club, sang something on top or not, did a few changes before the gig after and so on. So I had these tracks for a while with me, and they began to grow and grow, shaping themselves slowly in time. Most of the 12″ I did alone, but the mix-down I did with Scott Monteith AKA Deadbeat. And working with him on it was great.

What were your original intentions when you started working on your new album? How did these intentions develop as you progressed deeper into the album, and from looking back do you think you kept true to them?

As I am just at the beginning of the process for a new album it is not really the moment for looking back yet. You always move away from your initial intentions somehow as time develops further. When I did my last album “Ay Ay Ay”  the decision I took of recording almost everything with my own voice was a result of a process and had nothing to do with the initial idea.

For me it is much more exciting to work under the conditions of necessity, improvisation and learning. I wish to be able to surprise myself with results, which is like a journey. I am not interested in searching but much more in the idea of creating conditions under which one finds new approaches, inspiration and results. That can be the way of recording, if I see it very technically or also it can be the decision of how one shares the process of musical creation maybe with other musicians or also how do we relate the music to the time we live in.

Would you say your album is a personal reflection of what is going on inside your head, or is it simply music to get people dancing?

I don’t think I am interested in the idea of personal reflection or introspection in music. From a European point of view, the romantic idea of the bedroom producer, the author, who expresses himself and his thoughts through music is considered something that stays on a higher level than “simply music to get people dancing”. It may sound simple, it hopefully sounds simple, dance-music, but the deepness of music does not lie in the wish of an author to be introspective.

I think music is more honest than the author himself and that it speaks a very clear language. In the end it will reflect the time and the conditions under which you have created the music than whatever you intended it to sound like. I don’t think so much of creation, but more of listening into the silence and trying to amplify what I hear there, and if I can do this in a more shared process, with other people and not having to look at a computer screen, then it’s even better…I think these are the working premises for a new album.

Pigeon holing you into a particular scene or genre of music is impossible and is something I really admire. What’s your reason behind this, are you undecided or do you just like a challenge?

I never liked genres, and House Music for me was always like not having to be part of a genre and being able to listen to many different things in one night that may create a vibe in common. In the end to minimize music into genre makes the music itself superficial and also makes communication more difficult as you really have to “belong to the gang” to understand what people talk about. I have lived in many different cities so I prefer a more open communication, and for me music has always been a way of being able to open communication, so it would be really boring and annoying to close the mind down to something that is too self-referential.

You’ve forged an intimate relationship with Kompakt. Can you expand on how this came to be and what you have taken from it?

This is something that has been going on for a long time since the 1990’s. I musically grew up with them and I lived in the same city. They are people whom I trust a lot and they have always supported me a lot and always given me total freedom in my work.

How has Cómeme developed since you founded the imprint back in 2009? What do you have scheduled for the label over the next couple of years?

I like the development because it has a very original dynamic. We can’t really control what happens with it and that’s probably the greatest element about it. It has become a great context of people now, and there is a lot of creation that we hope to be able to translate into records and express with what we do.

Due to this factor I cannot schedule over the next couple of years, I think we have to be able to react much quicker and to be more spontaneous. We don’t want to enter into the classic label logic of promo, release, next release, promo, album and so forth… we like to consider several ways of releasing and celebrating music, and therefore we have to reinvent ourselves all the time, I think that is something that gives me the energy to work on this.

Why did you decide to release your single on Kompakt as opposed to Cómeme?

I don’t know where I will release the album yet and the single I did on Kompakt as I felt I should leave space for the new artists on Cómeme on the Cómeme release plan. But I will sure do a Cómeme 12″ again soon.

Where do you find inspiration?

In improvisation, in making parties on the streets and playing, not only in other music but also in life in general.

Your voice is imperative for your music; it’s an integral instrument. Have you employed any new founded methods of production into your new work or do you stick to what you know best?

That’s too early to talk about but I am sure I will try to find a new way of work. I don’t want to do what I know best, I prefer to do what I don’t know so well as I believe one makes the best things anyway at a starting point. I will start somewhere where I have not been before, it’s also more exciting and more fun for me, and these things you always hear in the results.

Do you have any remixes or collaborations in the pipeline?

What producers and DJs do you think deserve recognition?

Too many that are not in any playlists or any charts.

Just don’t stop the dance, as Elbee Bad says, that’s important. To take it to everyday life, not only the club…