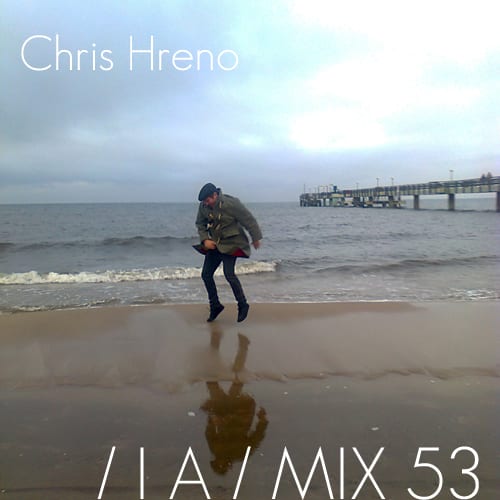 Chris Hreno is a DJ and producer from Montreal, Canada. He currently lives and works in Berlin within a close network of creatives and musicians, which include Matthew Johnson, Ernesto Ferreyra (Chic Miniature), Konrad Black, The Mole and Hrdvsion.

Since relocating to Berlin, Chris has worked on an array of projects with The Mole and Cobblestone Jazz. Chris has also done a string of remixes with The Mole on Internasjonal, Turbo Recordings, Electronic Minds, Manocalda. Chris will also release a string of solo releases on Sound Architecture and Fur Trade.

We caught up with Chris to explore his affinity with the Canadian electronic music scene and his forthcoming projects and records. His down-tempo mix features Moritz Von Oswald, XDB, Skudge, Isolée, Floating Points, François K and many more.

Can you please introduce yourself and tell us what you’re currently up to?

What are your musical roots – Who/what’s responsible for developing your taste in electronic music?

Well I guess the problems began when my mother bought me, N.W.A ‘Straight Out Of Compton’ for Christmas. I guess this was before parental advisory warnings were on records.

From then on it was a steady downward spiral through, Steve Mallinder, Cabaret Voltaire, Psychik TV, Jesus and The Merry Chain, Birthday Party, Suicide, New Order, Moondog, Ween, Eddie Murphy, Murk, Slowdive, Gordon Lightfoot… You know how it goes. I have been collecting records like a pig since then.

You’re originally from Montreal, Canada. How long did you live in Canada for and when/why did you decide to move to Germany?

I moved to Berlin 2 years ago. For the same reason everyone moves here, I love the nightlife and I like to boogie.

When producing new music, what environments do you work best in and with whom?

I work best shut off from the world, where I can focus and relax by myself or with my friends. You know holed up somewhere safe. But, I would like to adapt someday to Hrdvsion‘s style of working… Exclusively in bed.

What’s your studio setup consisting of? And what is your professional opinion about analogue equipment versus digital?

Luckily I have the good fortune to work in some amazing studios, Matthew Johnson‘s, Ernesto Ferreyra‘s (Chic Miniature), Konrad Black‘s. These guys have great rooms crammed full of some serious gear. I am always excited to work anywhere, so I am even happier working at home with a great pair of monitors with a few key pieces of gear. My studio is pretty stripped down these days because a lot of my gear is still in Montreal, but I get by and I rarely complain.

Apart from producing music, what else do you get up to?

Being part of this Canadian collective, what’s your involvement with Wagon Repair? We’ve noticed that the label’s release schedule has slowed down over the past year. What projects, films and records have you been involved with on the imprint?

I played on some of the tracks for the “Faust” soundtrack that Cobblestone Jazz presented at the Time Warp festival, 2009.

You also produce under the name ‘Valerie Temple Boyd’ – Can you expand on the moniker and what it represents and means to you.

Watch this video…because this kind of sums it all up.

You released a track on a split EP, ‘From Villeneuve To Damerow‘, with The Mole back in 2010 – How did you two start working together and what objective did you have for this record?

Colin de la Plante and I met back in 1996 at Bob and Deana’s record shop, Hush Records. At the time I had a studio in a loft space in Vancouver. Colin had his studio in the back of a Hyundai Pony that didn’t lock. We got talking in the shop. And soon after, he dropped by in the Pony and we combined studios for while and made some music. In 2001 we released a record. Since then we have worked on a lot of music together.

You have future collaborations planned with Mathew Jonson, The Mole and Konrad Black – What can you share with us about this project?

One future name to lookout for is Drunktank!

You also have a release scheduled for release in April 2012 on Sound Architecture – What’s your relationship with the label and what do you hope to achieve from this record?

I think its going to be a really great record. Joackim is a good friend. I am looking forward to its release.

What else do you have scheduled for 2012?

I am working on a video / music project which I will be touring.

Willie Nelson is more than just a country singer. One must treat him with the reverence and the respect he deserves.