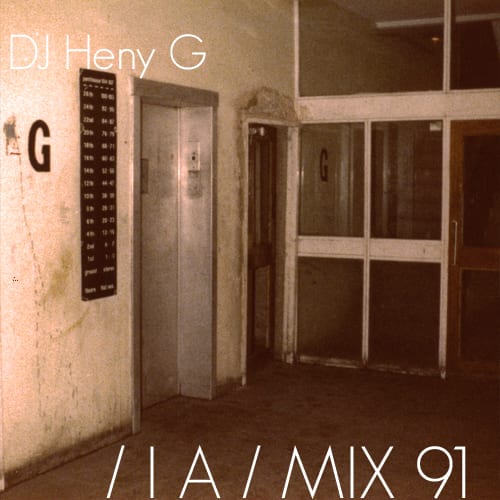 Malcolm Gustave remains one of the unsung emissaries of early ‘Dubstep’ innovation, supporting the future stars of the scene, working closely with a tight knit group of producers, and staying true to his core musical values. So why did he never come to prominence on the same scale as some of his peers? Well sometimes life gets in the way, and you have to re-evaluate what’s really important to you at any given space in time. Becoming a father clearly had a profound impact, yet ‘DJ Heny G’ has never lost sight of his goals and continues to this day to promote a broad spectrum of artists in London and beyond on his long standing Pirate Radio shows.

Over ten years’ experience on the air waves and countless hours locked away refining his sound in the studio, has produced at long last, the ‘Child Hood’ album. Those of us who have followed his journey know it has been hampered with set back’s on more than one occasion, but now at long last we have a full length LP, and Heny G is once again enjoying his time in the limelight. A sound that in its heyday would have been referred to as ‘Purple Vibes’, it radiates Soul and Sub Bass wisdom. This unhinged interview and mix gives us a chance to look under the hood at a man on a mission, and makes a warm addition to the cold winter months.

My name is Malcolm Christopher Gustave better know as ‘DJ Heny G‘, raised in West London, from around when I was 4/5 I knew I wanted to do music all the time from my dad being a musician himself and always playing music in the house every day without fail

My father used to be in a typical Rock’N’Roll band that had much more of a soulful background, he used to play a lot of Curtis Mayfield, James Brown, Issac Hayes, Herbie Hancock, Stevie Wonder…

I could go on forever with the list! I had music lessons with the Guitar & Drums but I was distracted by all things radical when I fell in love with pirate radio and the way people went about everything, that inspired me a lot. Discovering Acid House & Hardcore Jungle as well as the whole pirate radio scene, I was only 7 years old as well!

Well I started professionally around 1997 but I was way to young to do anything you know, people didn’t take me seriously at all, it wasn’t until a few years later in 99 when I did my first pirate show aged 13. I felt like everyone else once I’d done a radio show which was a long lived dream until then and even still everything was so far fetched. I was buying records every week with the little money I had and eventually I was offered a job at ‘Release The Groove’ (Soho) in 2002 and that’s when things started to look serious as I met so many people down there and I was able to progress within the industry for people to hear what I was about.

Your journey has taken you through some of the most influential underground radio stations in London, and remains a solid creative outlet for your work. What attracts you to the radio medium?

Radio will always have a special place in my heart, it’s given me everything I’ve dreamed of and I’m blessed to have history within the radio world. I discovered Kool FM/Weekend Rush/Flex FM/Rinse FM/Freek FM/Ice FM in 1994/95/96 and I always dreamed of doing my own station. It all became a reality in 2003 when I started a station, that eventually joined forces with another [React FM 99.7(2003-2008)] and that’s when myself and everyone around me was able 2 progress even more as we had an audience that was dedicated to our music.

I was on Rinse FM, which was probably the best thing ever to happen to me as the Dubstep scene was still developing and to have played a part in that whole movement, playing at FWD>> – That definitely was one of my finest times in radio, I’ll cherish that forever no doubt, as this gave me maximum exposure to the right people and Rinse elevated my career.

I’ve been on FLEX FM for 4 years in august, it’s another childhood station that I grew up to and this year it will be officially my longest serving home and I’m very happy with how things are down on Flex. I’m working with the staff to push things in the right direction as they are stepping in to their 21st year of broadcasting which is a milestone for any radio station, and with the roster that is building up on Flex it’s very exciting. This is my new chapter and I have a good feeling I will be at Flex FM for a long time, people will hear a lot more from Flex in 2013, and we still need a cutting edge pirate station as all the legal stations don’t always tell the truth.

Could you tell us what your album ‘Child Hood’ means to you and how long it’s been in the works?

I started writing the album in 2007 but I didn’t realize I was making an album until around April 2008 when I wrote the title track to the album ‘Child Hood’ – The whole process between 2007-2012 was an emotional ride, the pain and struggle to get it out was the hardest thing, people thought it was easy, but I didn’t make it any easier for myself when I said it would come out and then it didn’t. To be honest I had a P+D deal and the company I was with went bust but it was the best thing to happen to me looking back as I added a few things to the album and the album had even more meaning once these changes were made, I didn’t want this album to be rushed as every single track is close to my heart, they are like chapters of my life without words so it coming out at the right time was very important to myself.

The mix represents myself as a DJ and producer, so its like a whole package of what ‘The Gangsta Boogie Music Experience’ is all about, what you get on my radio shows is exactly what you’ll hear in the live shows, so the mix represents the sound fully on all four corners. Expressing the soulful and deep side of the scene is very important to me and the mix shows this, but what I always like to share with people is innovation, something that’s rare but ground breaking by sound.

I’ve always used FL Studio [Fruity Loops] since 2001 along with the original FL Studio crew [Skream, Benga, Plasticman aka Plastician, Silkie, Quest, Jay 5ive, Kromestar] – I’ve always said it really doesn’t matter what you use, its how you use the programs. You have to be willing to learn always as well as having patience and a natural gift to write music, people often forget making music is an art form, its how you express yourself as an artist

Could you cite any particular labels and artists that have influenced your work over the years?

There is way to many! But I’d say people like Kerri Chandler, LTJ Bukum, DJ Krust, Goldie, Just Jungle, Photek, 4 Hero, Ron Trent, Masters Of Work, R.I.P Groove, Jeremy Sylvester, Todd Edwards, Zed Bias, Steve Gurley, Wookie, EL-B, Skream & Benga, Silkie & Quest had the most impact on my music, I know there is a lot more, but these guys are very important to me, they all gave me incredible inspiration and influenced me big time which I’ll always be grateful for

Where do you see your musical persuasions taking you? Any projects, collaborations, live shows or parties we should know about?

Well the album has re-launched my label ‘Gangsta Boogie Music’, you’ll be seeing us release a lot of music for 2013. I’ll be releasing some music on other labels as well as launching a new project I’m doing called ‘STATE OF THE ART’ which is a electronic music band I’m starting which will see myself working with more vocalists which I’m very excited about as that’s always been a dream of mines. I’ll be doing a ‘Child Hood’ tour this year so I’m really looking forward to being back on the road; I live for those kinds of times!

Could we have an insight into what you’re listening to at the moment?

I’ve been listening to a lot of Ron Trent recently, he amazes me how deep, soulful yet innovative he is with how he creates house music and beyond, he is one of a kind man, so he’s been getting a lot of plays recently and he is one of my hero’s ever since I discovered his music when I was working at ‘Release The Groove’ and ‘Uptown Records‘ in the 00’s. I listen to a lot of different styles of music all the time, but there are a few producers that’s really blown me away in recent times, Om Unit being one of them, he is an incredible producer, has that perfect mixture of soul and sonic’s.

Being with my family, I become a father again in March for the 2nd time!

Stay true to yourself always and be inspired by life, whether that be the good times or the bad times, One Love.