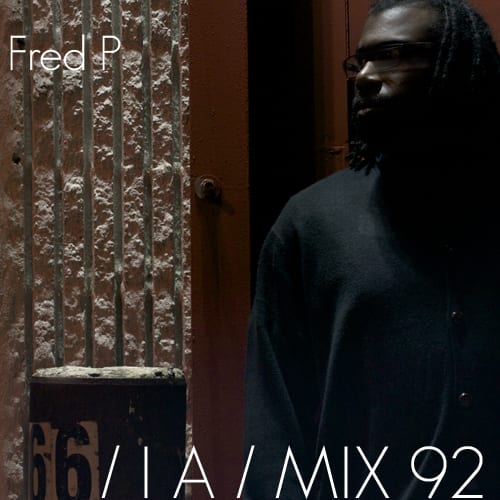 Fred P aka Black Jazz Consortium has become one of the key players in New York City’s resurgent house scene. Having setup and established his own record label Soul People Music in 2005, he’s primarily operated it as an outlet for himself but has also released tracks from the likes of Move D and Jus-Ed. Ahead of his performance in room 2 at Fabric on Saturday 23rd February we caught up with the Fred Peterkin for a short Q+A on his musical heritage, analog gear and forthcoming releases. Fred has provided a suitably deep mix, laden with hypnotic tracks from the likes of Deadbeat, Marcel Dettmann, Norman Nodge, Frozen Border, Truncate and many more. His aim is to create a warm up of his performance at Fabric.

My name is Fred Peterkin also known as Black Jazz Consortium. I have been on the road touring and getting set to release my latest full-length effort Codes and Metaphors.

Tell me about the mix you’ve recorded for Inverted Audio.

I happen to be in Berlin recording this mix in a studio located in a basement. It’s wintertime with snow on the ground; however thinking of the night ahead at Fabric in room 2 my mood spoke threw this selection of music. I have to admit it has been a while since I cut loose and played some darker hypnotic bangers. These days there is no plan just preparation for recording a mix. I hope to have captured the vibe and some of the energy of Fabric’s famous room 2. It’s my first time playing in room 2 and I eagerly look forward to it. I hope the people enjoy this mix as a warm up of what’s to come on that special night.

Are there any particular tracks in your mix that stand out to you, or were eager to include?

That track would be Amazing it’s taken from the forth coming album.

You grew up in Flatbush, Brooklyn listening to all types and varieties of music. Looking back at that time in your life, what/who, played the most prominent role in exposing you to music?

My parents were a huge influence; they played records all the time. My Dad was a singer, songwriter, producer and my Mother sang in the house all the time. I get it all from them.

At this time were you classically trained in music? Did you learn the piano or any other musical instruments?

No I was not classically trained in an instrument. I do everything by ear and what I feel.

Science and philosophy play a large role in your approach to music and life itself. Please can you explain your concept on ‘the groove’ and give an example of how you’ve interpreted this in your music and your life.

To explain the groove is a huge discussion, which gets in to a lot of different things. To keep it short and relative everyone that may read this. It’s me staying true to myself. Doing what moves the philosophy and me is stay true to that. Honestly express yourself nothing trumps the truth and the truth is always felt. No need to get complicated when simplicity is enough. You don’t have to completely fill a space to make your point. In the case of dance music it’s better not to completely fill a space. Life is similar simplicity is best when you leave space things can enter; there is room for growth.

You also fixed up old broken cassette decks and other pieces of equipment. Have you experimented with circuit bending to create new sounds from old instruments? If so have you used them in your music?

That was done out of necessity I wanted to do multi-track recording and discovered white noise. I am one of those guys that just tries stuff if it works or not doesn’t matter it’s about the trip not the destination. I have learned a great deal taking this approach; I use these techniques to this day.

For you what is the most prominent piece of analogue equipment that you use in your productions?

My Korg TR. I would wake up every morning and play it until I got something out of it. I wrote all my albums on it and half of this new one on it, she’s a beast.

Tell about your time producing hip-hop, who did you make records with and what opportunities did this open you up to?

I never made a Hip Hop record let me clear that up. I did a lot and I mean a lot of demos for people. That’s where I got my production chops. Over 10,000 hours worth and were a couple opportunities that came out of it. One was credits for rhythm programming on Noel Pointers last album. I met a lot of really dope MC’s and did beats for them from time to time. I had a project with my cousin it didn’t pan out; I put music down after that.

How much time did you spend in the same studio working on your on material?

I was a hermit I would wake up in the morning load the session front the night before finalise it and move on. It was like this for years to this day I still do this. It’s a continuation in the stream of thought building the worlds of sound until it fleshes out into its own universe.

Out of all of your releases, what track/record defines or completes you?

It’s a never-ending process of growth, there are constantly more letters being added to the alphabet, which creates more vocabulary thus adding to the dialog.

Tell me about your decision to establish your own record label ‘Soul People Music’, what triggered you to start it?

It was out of necessity I was doing digital releases and wanted to release a CD which going to be my last effort. That CD is Re:Actions Of Light after that everything changed. Soul People Music went on to include 12 inch releases.

Who else is involved in the day to day running of the label? Is there an office/HQ? What is your labels mission and how do you go about the A&R process and what records will you release in 2013?

Soul People Music is a small labor of love. It is mainly an outlet for my own music. I choose artist whose music I love and respect. The mission is to create and select music that I want to hear. Pushing interesting ideas, sounds and vibration is the goal. This year it’s about Codes and Metaphors, the Earth Tones series and some other new things about to drop.

Are there any fresh talent you’re particularly digging at the moment? Care to share?

Of course, I know he’s not new but I am really looking forward to AYBEE’s new full length, Joey Anderson keeps surprising me over and over, he is one to watch. Anthony Parasole is doing great things with the Conner. Lapien is ridiculously dope. GB, I am just finding out about but I am starting to pick up on his stuff and it’s really good. Pursuit Grooves, I have been a fan of her work since forever, she is doing some groundbreaking stuff that is really dope. Dakini9, she is another one to watch she has her own take on things, which is refreshing, and she is a wicked DJ. Naokia Shinohara, he made a appearance on Earth Tones last year we are about to link up for another project. October, I’m a big fan of his music.  They are all such talented artist I am inspired by them all.

What’s the reasoning behind the name Black Jazz Consortium, how does it differ to Fred P?

In 2010 you released ‘Semester II’, collaboration with DJ Jus-Ed and DJ Qu. What’s the story behind your relationship with these two producers and do you plan to work on another record?

Semesters are a Series on Strength Music Recordings home to the mighty DJ QU. He asked me to be a part of that particular record which is still a huge honor for me because I am a fan of his work. I got to be on a record with Him and DJ Jus Ed together. To me it’s very special because we did the very first UQ label night together in Berlin. We all have made other records together since then.

Are there any particular environments in which you prefer to make music in?

I prefer a studio, however from being on the road constantly for long periods I have learned to make rigs and improvise where ever I am.

Having been brought up on the NY club circuit, how does it compare to the European scene? What are the major differences?

Every city and scene has it’s own flavor, in that there is no comparison. I would say there is a lot more happening with dance music in Europe than the states but to compare vibe it would be pointless. One major difference would have been dancing, but lately at the clubs and parties I have been playing at people are dancing a lot more than in the last couple years which is a good sign.

What’s next for Fred P? Working on anything at the moment?

Just concentrating on Codes and Metaphors and the next Earth Tones record at the moment. To keep up with what’s new in the Black Jazz /Soul People Universe go to www.soulpeoplemusic.net

What are your particular interests and passions besides music?

I have some side projects that are connected to my musical need. One is Sound Destinations, which is a series of short films I produce and score. I’m seriously interested in film scoring sci fi / abstract corky indie stuff. Another is a book of images that I am working that is purely self-indulgence at it’s best. I am not ready to share that one yet.