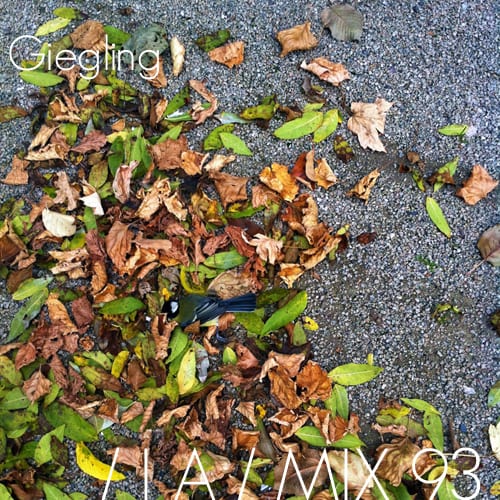 German record label Giegling was born out of a mutual passion of music from a collective of friends and producers who originally set out to arrange parties in an abandoned building in Weimar for their friends. After their venue was demolished in 2008, the collective continued to make use of the Giegling brand they had formed and opened up their own vinyl only label focusing on the deeper realms of house and techno.

This mix was recorded by Ateq, a member of the Giegling collective, who will also release the labels 13th record, which features in this mix. Florian’s mix is aimed to represent his personal perspective of the overall Giegling sound. In the interview we discuss the origins of Giegling and the people behind the label. We also discuss Giegling’s relationship with Kann Records and the labels approach to hand crafting original artwork for their releases.

Please can you introduce yourselves and tell us what you’ve been up to so far in 2013?

Hey I’m Florian and I go by the name of Ateq, I’m part of the Giegling posse. 2013 is going to be resonating on a mother frequency due to my new MX3V2 Modular Resonator and giving birth to my upcoming release on Giegling 13… hehe, which you can also listen to some tracks in the mix.

Tell me about the evolution of Giegling, from being a small club night in Weimar to becoming a record label – What’s the story behind your reasoning for establishing the label?

The label was meant to be a requiem for the club we were doing in Weimar back in the day. The club was in an abandoned building that got knocked down in 2008. We had little money left and decided to press a vinyl. We wanted to save some of the dirt and the magic.

How did you all meet each other?

Dustin and I have known each other since we were kids. We studied together in Weimar and we met Konstantin and Rafael (Kettenkarussell). At that time Weimar was a crazy place, the golden age of modern bohemianism. There were private parties every day. Usually in private houses where everyone was coming so the whole house and street was full of people.

In that time we also started doing parties together. At first we did some smaller jams in the house were lived in, then we did the club night and after that we spread out and did some open airs and parties in other cities.

In 2008 we also starter doing a stage on Fusion Festival. All that stuff was growing together with the label. It kept us busy and now as most of us moved away from Weimar it’s these events that brings us all together and back into that vibe so every party is a little reunion.

Tell us about the mix you’ve recorded for IA? Is it a back-to-back mix or a solo effort? How and where was it recorded and are there any tracks that are special to you in the mix?

The mix was recorded by me at my place to represent my perspective of the Giegling sound. It’s a more minimal approach. I included a lot of Giegling records, which are unreleased. I also included tracks from Giegling 13, I really like the sound of the label and its many facets and that you can use the music in so many different contexts. So when I play these records they sound totally different from when Dustin or Konstantin play them.

Since founding the label have you ever set out any specific aims or aspirations to achieve with Giegling?

We just want to do our music and play it to people. It’s nice to be able to release the music that we do and have the freedom to tell our own story without limitations. Giegling gives me a lot of freedom to experiment and try out different things. Everyone is still finding out…and that’s exciting. We’re all learning together.

In terms of operating the record label, what are you each responsible for?

Vril is the minister of doom, Leafar Legov is responsible for wet panties, Dustin is responsibly for the bausparvertrag, Konstantin for the pressure, the Prince of Denmark for the dreams, Ateq for the artzy fartzy vibe, Dwig responsible for the samples and Deer is our technical adviser, Edward for neuroses and Maze is our house keeper.

The records you release, such as Rau’s ‘The Blessing EP’, features an antiquarian stamp. Tell me about your admiration for antique illustrations and if there is a certain period, continent or subject that you’re particularly in to?

The Staub series was a secret message about how things in the universe and human kind stick together. It’s a look back into the future.

What books and journals do you refer to when selecting stamps?

It is kind of homage to conspiracy theories with all its lies and truths and an ode towards the end of the world.

In 2012 Traumprinz released ‘Paradise With A Lobotomy’ on Leipzig based Kann Records. Tell us about your relationship with the label and do you plan any more collaborations with Kann?

Alex from Kann invited Kettenkarussell to play at Leipzig in 2007. The guys shared a lotion common and ever since they’ve had a big connection between Kann and Giegling…like a love affair… they gave us a lot of support to start the label and we’ve done a lot of parties together, which is always a lot of fun. We love their spirit. Also Traumprinz has a huge fan base in Leipzig… I guess Leipzig likes to dream.

In an interview with Radiant Childs you stated that the sleeves for the Staub series are made with a stencil where you use glue and dust to embellish the logo. Please can you expand on the hand made effort behind the records you produce?

Due to digital distribution and how that changed how people dig music we wanted to find a physical form that can represent the content of the music and give it back some of the value that has been lost through in the digital revolution. We’ve always wanted to make records that we would like to find somewhere hidden in a dusty record store.

Also the dust on the record is from special places like the Giegling club, the place where we lived together and from the shop we did.

Who do you use to for mastering and production?

We master at Dublates & Mastering and we press in Leipzig at R.A.N.D Music.

Giegling releases deep house and techno, what other types of you music are you personally into?

Giegling as a club was always very broad in music . We always had one room with house and techno, one room with dubstep, bass and electronica and one room that was funk soul and rock n roll.

Most of us listen to other types of music than just techno. We have our roots in music like Wu Tang, Nirvana , Guns & Roses, Portishead, Radiohead, Queen and other commercial pop music from the 90s.

Also Warp, Ninja Tunes, Stone Throw Records and all the other great German classical composers from 1400 – 1850…to Stockhausen, John Cage, Steve Reich and a lot of South American Bossa Nova.

What does the future hold for Giegling? What records do you have scheduled for in 2013?

There is a upcoming EP from Edward, a melancholic various artist from Vril , Prince Of Denmark and Kettenkarussell, an EP from me Giegling 13 and and LP by Dwig called “Forgot The Forget Pink Elephant”.

Do you have any words of wisdom you’d care to share?

The pupils came to their master and ask “what is the Buddha”. The master said: “it s a dry piece of shit” suddenly the pupils were stricken by enlightenment.