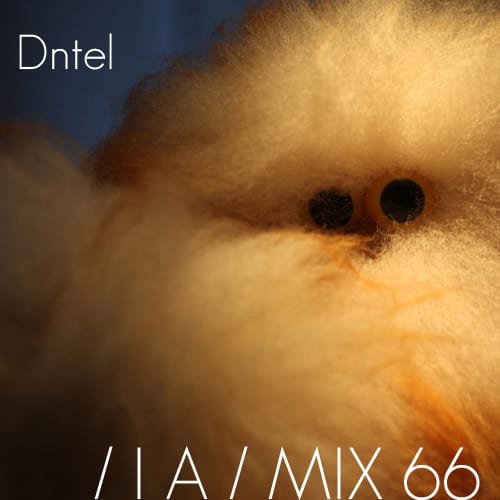 Dntel is the work of Jimmy Tamborello, a producer based in California who’s responsible for the Postal Service and the electropop outfit Figurine. On June 4th 2012, Dntel returns with his new album, Aimlessness, released on Pampa, the label run by DJ Koze and Marcus Fink. Aimlessness marks Jimmy’s fifth album and features contributions from Baths aka Geotic and Nite Jewel.

In anticipation of the albums release we invited Dntel to record a mix for Inverted Audio to showcase his new sounds as well as giving him the opportunity to portray the sonic atmospheres contained within.

“Most of the music here has a connection to the feel of my record.  It’s not quite music that influenced me, a lot of it I didn’t hear until after I finished, but I feel like these songs sum up the mood I was striving for on a lot of the album’s tracks.  It’s a little vague but I decided to describe it as ‘fluffiness’.”

His mix features tracks from Aimlessness, as well as unreleased cuts from the album. It also features Robag Wruhme’s forthcoming remix of Bright Night. In our interview we discuss how the album came to fruition and how working with DJ Koze has helped shape and materialise Aimlessness.

My name’s Jimmy Tamborello, I’ve been busy lately doing stuff under my Dntel moniker.  The last few months have mostly been spent preparing for the release of my album Aimlessness

Please can you describe how you created your mix and give reasoning to your track selection.

I wanted to do something that was related to Aimlessness. Most of the music here has a connection to the feel of my record.  It’s not quite music that influenced me, a lot of it I didn’t hear until after I finished, but I feel like these songs sum up the mood I was striving for on a lot of the album’s tracks.  It’s a little vague but I decided to describe it as “fluffiness.”

It’s been five years since you released your last album ‘Dumb Luck’ – how do you feel your new album Aimlessness has advanced your sound and personal approach to producing music and to current music trends?

I go through phases in my listening habits.  I think for the last few years I’ve been focusing more and more on instrumental electronic music and losing touch a little with indie rock, so this album reflects that.  It’s predominantly influenced by the last few years’ electronic music trends, but filtered through my production quirks and limitations.  In the past I’ve always tried to stay away from using beats and BPMs that would put my music into specific dance sub-genres but for this record (and 2010’s After Parties EP‘s) I’ve had fun embracing them.

Please can you expand on your decision to release Aimlessness on Pampa – how did you encounter DJ Koze and Marcus Fink and what was the defining factor that led to you releasing the album on Pampa?

DJ Koze and I had traded occasional emails for a few years (and he did a remix for my James Figurine project).  A year or two ago we finally met in person when he was in Los Angeles for a DJ gig.  We did some sightseeing and while we were in my car I played him a collection of Enya remixes I’d just finished that he liked.  We discussed having Pampa put those out, but in the end decided it would be too difficult to get the rights.

Meanwhile I had a pretty big collection of tracks I’d been working on that I couldn’t figure out what to do with or how to finish so I sent them to him for advice.  He expressed interest in releasing some of them and it seemed exciting to get to work with him and Pampa.

How do you feel about being part of Pampa’s em discography and roster of artists?

Honored! I’ve been into everything they’ve put out, so it’s nice to be a part of it.  And it’s been really fun working with the whole Pampa crew getting this record ready.

What initially provoked you to start working on the album – how long have you been working on Aimlessness and with whom?

These songs are mostly from 2011 and were produced without any idea of them ending up on a full length.  It was all solitary work up until Pampa got involved.  DJ Koze helped with advice, mostly telling me when songs felt finished, or sometimes suggesting I add or subtract certain elements.  He also helped pick the songs and figure out the track order.

At first the whole album was instrumental, but Koze suggested adding vocals to some.  Will from Baths had already written a vocal part for “Still” when we were on tour together in August 2011, so we recorded that. I’d wanted to do something with Nite Jewel so I sent her most of the record and just asked if anything seemed fun to sing on and she came up with “Santa Ana Winds.”

Where did you spend the majority of your time producing the album – do you have any preferred environments? If so, is there a particular theme or aesthetic that lies within the album?

It’s all produced in my home studio, mostly by myself.  It’s dark but pretty comfortable.  I think the album is definitely aimed at home listening, but I’m not sure how much of that has to do with the fact that it was made at home.

How did your working relationship with Marcus Fink and DJ Koze help develop the album? Have they had a direct input on the way you produce electronic music now and in the future, what would you say you have learnt the most from them?

I talked about their involvement in developing the album above.  I don’t know if I have a good answer for what I learned…  Maybe just to not overwork things.

What’s the story behind the name of the album, its artwork, and which tracks are you most proud of?

When you first start a song you have to ‘SAVE AS’ and give the song a title.  This happens before you’ve barely started working, and I rarely start a song with much of an idea of what it’s going to be.  At some point I just started titling everything “aimless” with a number after it.  So most of the songs on this record had working titles like “aimless21” or “aimless10.”  So Aimlessness was a fitting album title, I like how awkward the word is.

At first I wasn’t even sure if it was a real word.  I think it has a Buddhist connection but that’s not why I used it.  It’s a good description of how I’ve been working for the past few years, just one song at a time, never really knowing where I’m heading.

The image I used for the artwork was from a stack of photos my girlfriend bought at a garage sale.  I liked the colors and the abstraction of presenting the image upside down.

I like different details of each of the songs.  I like Bright Night a lot, probably because it was one that I worked on the least.  Some were more of a struggle to get right so I’ve heard them too many times at this point.  Paper Landscape is exciting for a couple of reasons, mostly because I was able to get the Popol Vuh samples cleared!  But also a lot of the synth melodies were randomly generated and I like the way they weave into each other, sometimes working perfectly and sometimes clashing.

“Still” features vocals by Baths and “Santa Ana Winds” has vocals by Nite Jewel – what attracted you to work with these two artists and what do they each bring to the table musically?

They’re both voices I love and both of them came into my life in an organic way, so I didn’t feel like I was cold-calling vocalists.  As I mentioned above, I met Will/Baths when we toured together last year (he was playing as Geotic) and Ramona Gonzalez/Nite Jewel is an old friend of my girlfriend.

Since this started out as an instrumental album, I like that both of their voices can be ethereal, I can imagine both of them on 4AD in the late 80s…

You also produce a weekly radio show called ‘Dying Songs’ on Dublab – You feature a vast selection of ‘melancholic electronic music’ on your show from Actress, Claro Intelecto, Tropics, Burial, Grimes, Four Tet and many more – How do you go about curating your show and what’s your aim with it?

I’ve DJ’d on Dublab for over 10 years and it’s always been about playing music that is exciting me at the moment.  It doesn’t cover all the kinds of music that I listen to at home, but it can still get pretty scattered.  It’s fun to try to figure out ways to fit disparate genres together.

Sometimes people send me their music for consideration, which is always exciting, but otherwise I’m always looking around online and in record stores.  I also try to do exclusive remixes and edits to include.

Do you think your selection of music and ultimately taste is rare to find in the USA? How do you stay connected with Europe’s music scene?

I like my taste, but I don’t know how rare it is!  And I don’t know what I do to stay connected to any music scenes.  I even have trouble keeping up locally these days.

Everyone has such deep access to all music on the internet now, you really have to be an explorer to be the first to uncover new, hidden gems.  I don’t think I’m on that level, I’m getting pretty old.

Will you be touring the album with a live show, and if so where? How are you planning on translating the album into a live performance?

I’ll be doing scattered dates in the US and Europe in the upcoming months.  I do a pretty basic laptop show, using Ableton Live and a controller.  The songs are reworked a little for live but I guess the main draw Is hearing the music in a different context through a big sound system.  Plus I usually put together a video of visuals that I make myself.  I don’t really move that much, I’m pretty self conscious and have never been comfortable dancing.  I wish I was!

What do you have planned for the rest of 2012 and with Pampa – any remixes planned?

There will be an EP of remixes by Robag Wruhme that I’m really excited about.  I’ve been a big fan of his for years.  Plus a few other remixes coming, I think.