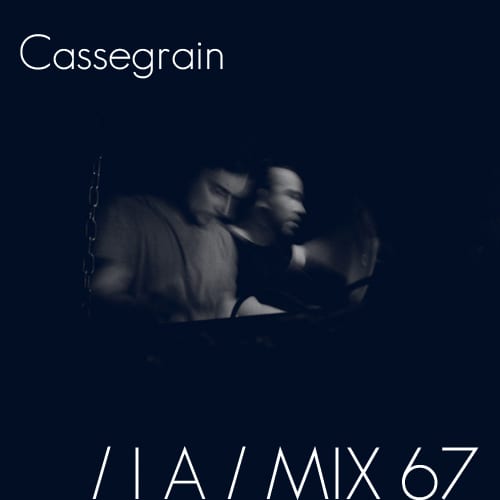 Cassegrain is the collaborative force of Red Bull Music Academy Alumni Alex Tsiridis and Hüseyin Evirgen, who’ve had a busy year so far with much-lauded releases on Killekill, M_Rec Ltd., and Prologue. From their positively thunderous Tin Man collaboration Carnal to the unsettling, glitched bleep techno of Painter/Palette EP, not to mention their Coptic EP (read the IA review here), Cassegrain’s sound is otherworldly, always threatening to break their genre’s rigorous structure and evaporate in an intricate mist of mechanized sound design.

In their mix, the duo investigate this sense of sonic exploration, “the more experimental side of techno, not really for the dancefloor.” Read the interview below for some insights into their musical background and approach, as well as future plans and Hüseyin’s extraterrestrial concerns.

First of all, would you like to introduce yourselves and tell us what you’ve been up to recently?

Hello, we’re Cassegrain or Alex & Hüseyin and we make techno music. We’ve had quite a busy year so far with releases on Prologue, M_Rec, Killekill and a new label from Athens Modal Analysis which should be out shortly.

How did the two of you meet and start experimenting with music?

We met at the Red Bull Music Academy in Barcelona in 2008. We got along pretty quick and had similar tastes so started working on some music together whilst there. We basically started off with all the equipment you can imagine and have had to face reality ever since.

Considering your distance, how do you approach the production process?

We try everything; we meet up as often as possible which is the most productive, we swap parts back and forth via email and some tracks are solo productions with feedback along the way from the other.

What equipment do you use, individually and when together?

We have almost entirely analogue sources for our sounds, from synthesizers and home recordings (objects and instruments). A mixture of hardware and software goes into processing and everything is then sequenced in Ableton Live.

Which environments do you prefer to make music in and why?

Not much choice comes in to this really, but we feel comfortable in each other’s home studios. The idea of a small hut on a quiet island keeps appearing, so maybe that’ll work out.

You’ve enjoyed acclaim from various corners of the music media and public (not least here at IA), many of them raving about your dark, experimental techno – what are your current influences/inspirations?

Alex: Have found Vatican Shadow/Prurient very inspiring of late. Donato Dozzy is always an inspiration, keeps restoring my faith in techno. Otherwise, I really admire Nikos Veliotis, a Greek musician who experiments with the viola, he has tonnes of projects and is also a member of In Trance 95 who had a comeback recently with Minimal Wave.

Hüseyin: Lately I’ve been into watching some recordings of Roma weddings which mostly get a really distorted dubby sound through bad quality sound systems.

What’s your opinion of music journalism – how do you deal with other people interpreting and judging your music?

It’s always interesting to read somebody’s thoughts on our music. We read every review we come across carefully. It’s quite humbling to have someone write about what we do and we’ve read some really accurate descriptions so far that we could never think of. The press we’ve had so far has been positive, so no grudges have been formed yet.

What are your early experiences with music? Did either of you train formally?

Hüseyin: I had a very intense musical education from the age of seven. I studied piano and composition in Istanbul and University Mozarteum Salzburg and still work as free lance composer and performer. Since i was kid, i was always into various styles of music but most inspiring ones were classical and contemporary music, metal, free jazz and idm. i remember being into acid house when i was ten or eleven but didn’t hear much techno until early 2000´s.

Alex: I’m absolutely useless musically and technically in the traditional sense, I’ve just learned how to do some stuff and developed it bit by bit. I have to thank Music 2000 on Playstation for everything, was never into Metal Gear Solid. I was into dance music from an early age; that got replaced by idm and punk/metal in my teens but I came back to it during university. Producing techno however was an accident…

Can you tell us a bit about your recent cover art and track names for “Plate EP” and “Coptic EP?” – What meaning do they have to you?

The Coptic EP is related to popular science fiction and conspiracy theories. The pyramid landscape is meant to be seen from an alien ship, not necessarily in Egypt or on earth. The Plate EP is for a concept from the label based on the study of acoustics. We like it a lot as it fits with the whole shamanic techno idea aesthetically.

Tell us about your mix – is it a reflection of your tastes, or your live performances?

This mix touches on the more experimental side of techno, not really for the dance floor. It reflects mainly recent tastes and ideas. With the live set, we aim to stay true to our sound with plenty of weirdness but keeping it hypnotic and full of energy. Beyond all preparation and technical stuff , the most important thing is to have fun.

Tell us about your relationship with Prologue Music – how did you get involved with the label and what were your impressions of the label before you got involved – What do you hope to achieve by being signed to Prologue – do you feel you are a perfect match for their musical direction?

We liked the label a lot and sent a demo. We never thought about being a perfect match for any label but we are very honoured to be part of the Prologue family as they have been fully supportive of our sound and have released some of our strangest material which demands big respect.

What are your plans for the next few months? Any gigs / festivals / collaborations you’re excited about?

There will be a few gigs in Italy and UK in the next couple of months and we’re working on some more material with Tin Man so there may be a follow-up to the Carnal EP. We have some remixes coming up also which we still have to do, more on those soon. Release-wise we’re having a break at the moment after our recent run.

Any words of wisdom you’d like to pass on?