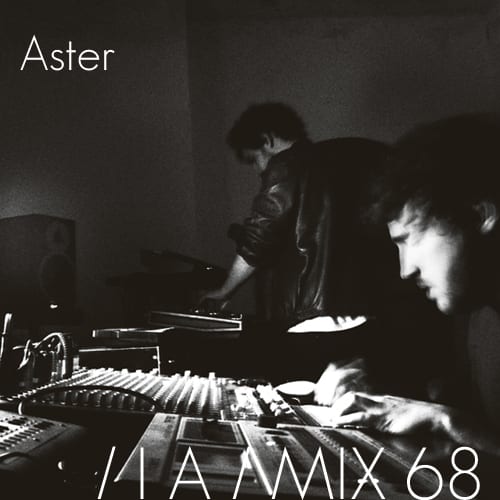 To get you in the mood for Sonar Festival 2012, we thought it only right to approach one of the best emerging talents from the Catalan capital for an Inverted Audio mix. Aster are a duo that have been making waves with releases on Mathematics Recordings and Hivern Discs (two tracks featured on the label’s first compilation – La Verdad Flota being a wondrous highlight from Pettre).

As far as mixes goes, this one is languorous and heady, lost classics and new blood colliding delightfully. If you’re in Barcelona, head down to Save The Day to see Pettre DJ today early; if you ain’t watch out for their trilogy of EP’s coming up on Hivern Discs. The first one, Danza, is close at hand.

Please can you introduce yourselves, tell us where you’re from and what you’re currently up to.

Aster is a musical project formed by Pettre and JMII. We both come from Barcelona. JMII moved to Berlin two months ago so now we’re figuring out how to manage our musical relationship from town to town.

What’s your musical background? who/what was responsible for getting you into making music and into the industry?

This is our first project. We both had our own solo works before Aster but now we are focused on this. We are so grateful to Jamal Moss and the people from Hivern Discs for their unconditional trust on our first tunes.

Please can you expand on the mix you recorded for us, what’s the logic / reasoning behind your track selection and what kind of mood do you think your mix is perfect for?

Our tastes regarding electronic music go from experimental stuff to raw house. In this mix we tried to show up this whole range of sounds merging some of our personal favorites.

What five albums or tracks define your personal music taste?

That’s a tough one. It’s almost impossible to define our taste with only 5 records. Of course there’s a big influence from classic Chicago house, indie, ambient, disco, kraut-rock and many other things in between. Pettre has developed lately an interest in concrete and classical music so, as you could imagine, there’s just too many records to consider here.

How did you come up with the name, aster?

Aster was the name of the abandoned astronomical observatory where we have been making music from the last two years.

What are your musical roots – are you classically trained, or self-taught?

We’re 100% self-taught. Neither of us has classical training so we always had to figure things out by ourselves. For us, hooking up the machines and interacting with each other has always been the only way to get it.

None of our parents were music freaks at all, so we just grew up like everyone else, listening to commercial shitty radio and slowly building form scratch a personal taste on music during the years. The only remarkable thing about us is that our interest in music has become something capital on our lives. That’s all.

What are the highs and lows of living and working in Barcelona? do you find the city constraining, or inspiring for creating music?

Barcelona is a nice small city, that’s definitely a good thing because we’ve always thought that being excessively influenced by the people that surrounds you is an easy way to lose your freshness and unique approach to music. That being said, it’s true that a city like Barcelona doesn’t give you the biggest opportunities for playing out in good conditions. That’s why one of us is living now in Berlin, you have to explore foreign markets to grow up!

How did your relationship with Hivern come about?

Our relationship with the label comes from the early days of Hivern Discs. Living in the same city and sharing a lot of tastes with the people that run Hivern has done that we ended working together without even noticing.

Tell us more about any upcoming releases?

Currently we are working on a trilogy with Hivern Discs. The first record will come out this summer and comes with a remix from Ital. The second record is almost done, and we’re rebuilding our studio this summer to have the last one finished and published by the end of the year.

We’re really thankful to Barcelona’s graphic design maestro Alex Trochut for doing the amazing artwork for those three records. We believe that this trilogy is going to be something special, so… Stay tuned!

What is your preferred medium and why?

We definitely prefer vinyl. While being completely aware that the present belongs entirely to non-physical mediums, we still feel the need of touching and admire the artwork of a 12″. That’s what we got used from the beginning, so sticking with vinyl still feels like the more natural way for us.

What other producers and collectives deserve some serious attention?

Internationally we really admire the roster of labels like True Panther, Young Turks, RVNG INTL or 100% Silk. In our country there’s also some really amazing talents to be discovered from the likes of Verus Gen Bree, Kresy, Lenticular Clouds or Marc Piñol.

There’s the trilogy with Hivern Discs, a JMII release on 100% Silk and some collaborations with local labels like Titan’s Hallo and Struments, we also plan to do some dj gigs and to add some new stuff to our live show soon.

Have fun at Sonar – don’t think that the city is always like that. The rest of the year the police would kick your ass badly if you try to dance or drink on the streets!!