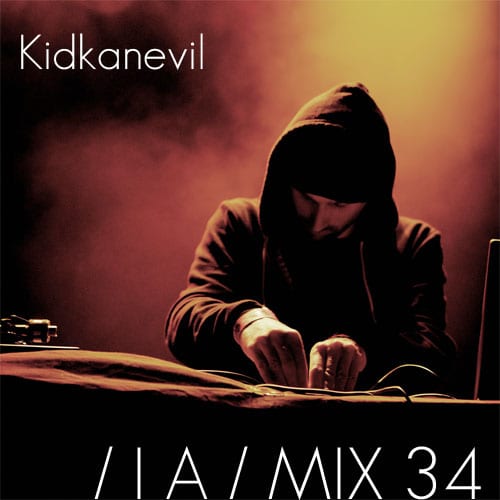 Raised on a healthy diet of jazz, sound system culture and the golden age of sampling, Kidkanevil aka Gerard Roberts developed a distinctive downbeat sound over the years that’s probably best described with his own words: ‘imaginary hip-hop’. A member of the experimental band, Stateless, and former writer for the taste-making music magazine, Straight No Chaser, Kidkanevil has received the thumbs-up from everybody from DJ Shadow to Daedelus to Okayplayer, URB and Wire magazine.

We caught up with Kidkanevil to find out more about his involvement with Stateless, the highs of attending Red Bull Music Academy and what he’s been up to so far this summer. His mix features an eclectic selection of tracks from Bjork, J.Dilla, Clams Casino, Strangeloop, Alva Noto & Ryuichi Sakamoto and many more.

My name is Kidkanevil, I’m from Leeds in Yorkshire and I wanted to be a character designer for Sega when i grew up.

You seem very much to be on a sonic journey through life. Do you have any formal training as a musician, and how do you see your music being received by an audience?

Yeah, that’s a good way of putting it actually. I don’t have any formal training no, I have no idea what I’m doing to be honest! But my Dad’s a musician though, so I guess I picked up some stuff from him. I don’t know about the audience thing, I try not to think about people actually listening to my stuff because I don’t like most of it.

Could you describe your Live setup, and what we could expect from your set?

I use Ableton and Serato with The Bridge, with an MPD. That’s it really. I kind of jump between performing my own tracks and DJing. I love DJing too much to just perform my own shit. I’d love to do something a bit more ‘live’ at some point though, I need some Oompa-Loompas or summin.

I’ve just produced a track called Stormy Weather for my super good friend Amenta, and I wanted to include that in the mix as a bit of an exclusive. So it starts with a piano piece and ends with Stormy Weather which is a piano piece too. That was all I had planned really, everything in-between is just whatever felt right to make that journey.

What were the highlights of your Red Bull Music Academy experience?

The whole experience was a highlight to be honest. Perhaps meeting all the people I met, I’ve made some friends for life from it. I don’t leave my home that much, it was all quite overwhelming, in a good way.

You are one of the creative forces behind the band ‘Stateless’, working as the beatsmith / producer , whose recent album was a heated fusion of electronic and live music. How has your role developed within the band dynamic?

I kind of took a backseat a bit in the early days of the band, just trying to figure out where my input and sound could work in what was such a different context for me, coming from a hip-hop background. I didn’t really force my sound upon the band too much back then, it was more of a learning experience for me. But now with the Matilda album I felt ready to really contribute as a producer and stamp my role on it much more confidently. So I guess it’s more of a genuine balance between my world if you will, and the live aspect of the band.

In a desert island discs style, if you could only keep 4 albums what would they be?

Where have you been playing over the Summer months, and have you got any releases in the pipeline?

Hmm, I’ve been all over the shop, It’s been a blessed summer! Croatia, Italy, Poland, Holland, Germany, Spain. Sonar was a highlight. Just to play there was a real moment for me. I never expected to get to do that. Release-wise there’s a whole bunch of remixes and productions. I have a free beat tape dropping soon. I’ve got an EP with Foreign Beggars dropping early next year hopefully. The main project for next year though is a collaboration album with one of my favourite producers Daisuke Tanabe. Working on that at the moment, kidsuke! So far it’s shaping up to be something special I hope.

What do you see as the prominent music genre’s in London’s underground electronic music scene this year?

Any chance of an insight into what your listening to at the moment?

I’ve been listening to the Alva Noto and Ryuichi Sakamoto series a lot. Always listen to Arvo Part, always. Kankick always. In terms of new releases I’ve been enjoying the B. Lewis Plug EP a lot. Been bumping Blue Daisy’s album ‘The Sunday Gift’ hard, that shit is incredible. Kendrick Lamar Section 80 is pretty crazy from a rap point of view.

What’s on the horizon for Kidkanevil? Any collaborations or side-projects in development?

Kidsuke!!! Lot’s of stuff. Mainly just trying to get better at my craft. Lot’s of toy instruments. More lazers.