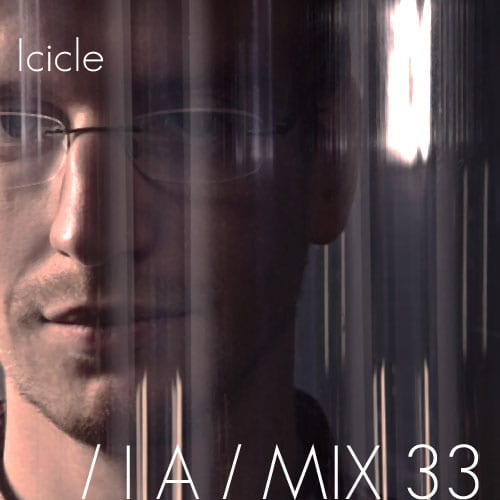 There’s no hiding the fact that we’ve been expeditiously reviewing Icicle‘s output this year. Both his debut album, ‘Under The Ice‘, and the subsequent maxi-single, ‘Redemption‘, have demonstrated to us just how intricate and versatile his perspective on dubstep, drum & bass, techno and house truly is. Let’s not forget his past repertoire either – especially last year’s ‘Xylophobia’/’Minimal Dub’, which shook up many a dark rave and silenced many a dubstep naysayer.

Icicle’s IA session offers us an insight into the new sonic territories that he’s been exploring and developing recently; that is, the vast domain of 130-140 BPM. It’s far removed from his pivotal drum & bass vibes, and instead it’s what he personally describes as “a little specialty mix”.

A heavy techno undertone underpins this stellar mix, which features tracks from Pinch, Icicle, SBTRKT (via Objekt), Proxima, and a very special track from Karenn, the recent collaboration between two of the most forward-thinking bass producers of 2010/2011 – Blawan and Pariah.

Icicle’s journey through IA MIX 33 also marks the final addition to our 4-part mix series curated by Eastern Electrics and Reprise, in anticipation to their August Bank Holiday event. If you’re still unsure about what to do over the long weekend, we emly recommend you head down on Sunday 28th August, and dive into the sounds of T.Williams, Monki, Seams and Icicle.

For those less acquainted with you and your music, please can you introduce yourself and tell us where you’re from?

I’m Icicle my actual name is Jeroen Snik and I’m originally from The Netherlands. I now live in London and make music with loud subbass!

Tell us a few things that you like, and a few you dislike about city life?

London is very inspiring, there is so much going on and being a part of that gives you certain energy. There are lots of people here I can work with, and just generally a lot of people on the same wavelength. It is hard to get away from it all though. London has a way of always keeping you involved and doesn’t really leave a lot of room for relaxing and unwinding.

How long has music played a prominent part of your life and what types and styles of music were you listening to in your teens?

Music has been important to me for as I long as I can remember. I’ve been playing piano and drums from a young age and as soon as I figured out you could use computers to program music I was messing around with it. I guess like every kid I started listening to mainstream pop music and gradually refined my taste, through Rave, Hardcore, Hip Hop, Techno and When I was about 15 years old, drum & bass.

At what point did you think you could make a career out of music?

I never did. Music always was a hobby and it just got more and more out of hand. I never aimed to make a living from music but I just couldn’t stop making it. At a certain point I could make a living out of it and stopped studying etc. but even then I just looked at it all as temporary. That’s about 4 years ago now.

Techno has been a vigorous reference point for you in recent times. Do you feel your incursions into this sound have opened up new possibilities for you as a producer and DJ? Is there going to be more work in this vein?

Yes, I realized good music isn’t bound by bpm so a good producer shouldn’t be either. For me the most exciting trend in dance music now, is that the boundaries between genres seem to slowly disappear. I intend to make full use of that.

Drum and bass stalwarts such as yourself, SP:MC, Kryptic Minds and Joker D AKA LX One have all heavily influenced the half-step sound. What’s your take on that in 2011?

I think it just shows that essentially it is the same music and sound just a little slower. One thing I hear a lot from people that have been into my (DnB) music from the beginning is, ‘I don’t really like dubstep, but what you guys make is great’. And that to me shows that it has been a wicked and successful progression of the same sound into different area’s.

Amongst the broader terrain of both drum & bass and dubstep, where would you plot yourself on the map, and where do you feel most comfortable?

Somewhere randomly in the middle, I hope. I don’t want to choose or say something like 37% this 63% that. Recently I’ve been playing half and half sets and that is great. I get to showcase the best bits in my DJ bag across both genres and even get to sneak in some techno.

You’ve recently begun playing live. Could you give us a brief run through of your modus operandi and what you enjoy most about it? Is the drum & bass scene ready for it?

I do think the DnB scene is ready for it but I don’t think they would just accept some guy playing a live set on a laptop. You cant really see what it is they are actually manipulating and I think a lot of crowds would prefer to see you play some vinyl instead. With this in mind my ground rule from the start has been no laptops. My set up consists of an MPC, a Virus and a Waldorf synth/ sampler. It is all controlled by an Axiom 49 and runs trough a Mackie 12 channel mixer and a rack of 19” gear containing a TLA valve limiter and a lexicon reverb.

Tell us about Shogun Audio and your relationship with the label; where and how did it all begin and what do you hope to achieve under its banner?

Shogun Audio is the Label I am signed to, and as such the Label I work with pretty much exclusively. Shogun is run by DJ Friction and he has been supporting my music for a long time now. He offered me an album deal a while ago, and we’ve put out my first album together earlier this year. What I think We are trying to achieve now is to diversify the sound as much as possible and move on from putting out rolling DnB for DJ’s to generally putting out good electronic music what ever that may be.

You wake up in the middle of the night to find your flat engulfed in flames. What three possessions would you save before escaping the building?

In these times that’s not even that unlikely! I would unplug my iMac and jump out the window, without it I’m in big trouble!

What can people expect from your performance at Eastern Electrics August Bank Holiday event?

Its going to be a hardware based cross genre live set by myself featuring LX One on the mic. I can promise you that I’ve never worked so hard, or shown more of myself as a music producer on a stage.

Can you please expand on your inspiration behind the mix you’ve created for Inverted Audio?

This mix is a little sneak peak into some of the new 130-140 music that I’ve been making and playing. It doesn’t mean I’m not mixing DnB anymore but as I’ve just released what feels like a million mixes and podcasts around the album featuring DnB, this is a little specialty mix.