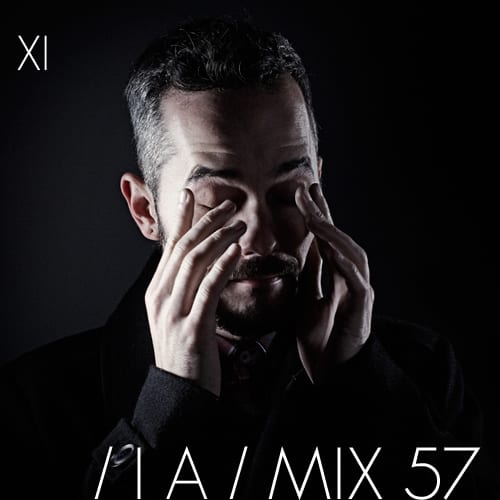 Christian Andersen aka XI has crafted and evolved a sound all his own in a mix that uniquely demonstrates his highly sought after talent. A journey that started in Toronto has taken him all over the US, Australia and Europe, where he now resides in one of the cultural epicenters for electronic music, Berlin.

Still in touch with his roots, playing regular radio show’s on STREAMIZM, working in record shops and collaborating with members of the LOETECH collective, XI has surprised himself with the extent to which his music has been appreciated worldwide. This appreciation has found him supporting acts such as ‘The Prodigy‘ and ‘Pendulum‘.

Unafraid to venture into new territory, XI is constantly exploring new head space and artistic horizons. In this candid interview Christian discusses his motivation, influences and collaborative efforts at length, while giving us insight into his humble, easy-going approach to his method.

Please can you introduce yourself and tell us where you’re from and what you wanted to be when you were growing up?

My name is Christian, I grew up in Toronto, Canada. I’m 26 years old and when I was little I wanted to be a stand-up comedian or a pharmacist.

What would you say was the most significant music you experienced in your childhood?

The Deftones. I don’t care what anyone else thinks. Best fucking band ever.

How far back does your interest in electronic music go and do you have any formal musical training?

Musically I grew up on metal and hardcore with hip-hop blended in there by way of my older brother. My interest in electronic music probably didn’t really begin until around 97 or 98 when I became enamored with jungle music.

I played drums from a pretty young age, and I think choppage appealed to me because of the intricacy of the drum patterns. In terms of any formal training I have two days of drum lessons under my belt.

The last few years have been successful for you – Could you please tell us about your personal journey and any personal highlights?

Leaving Toronto for Europe has probably been the most significant move, not just in the context of my “music career”, but also in my whole life. It’s hard to separate events that have lead up to this point but upon reflection it seems like I’ve managed a slow and steady path of improvement. From headlining local Jungle raves at the age of 16, throwing some of Canada’s first dubstep events, being the first Canadian to be invited to play at NYC’s Dub War, the first US tour, and of course playing along side acts I idolized as a completely amateur musician… it’s been pretty insane, every time I think I’ve hit some kind of ceiling another crazy opportunity comes along.

You’ve recently moved from Toronto to Berlin, Why?

Short answer: Change of scenery. I was just bored of being in the same city for 25 years, and I wanted to do something outlandish to spice up my life. I figured moving to the center of electronic music culture might be just the spark I needed to be inspired and so far I would say it’s been exactly that.

This was a side-project I was doing from the years 2009-2010, it was just a diversion. Trying different sound palettes and BPMs to expand my repertoire. This was probably the project which catalyzed the now much more diverse XI sound. It was an experience in ungluing my mind from musical archetypes and just making art as opposed to tracks that serve a “direct purpose.”

The mix we asked you to put together, is there a particular inspiration or motif behind it?

This is basically the set I am playing on tour right now with some variations here and there.

You recently produced a remix for Bwana – Can you expand on how that came about and your approach to the remix?

Bwana comes from Toronto as well, he had sent me some tracks a while back that I was having a lot of fun playing, when it came time for the EP to be released he asked me if I would be interested in doing a remix on it. I agreed and then proceeded to produce my personal favorite remix of my career. I had so much fun working on it, and it has been VERY well received across the board. Good for us.

What instruments and software do you rely on when producing music?

Ableton Live. I am super lazy. I do everything in the box, no VSTs no hardware.

It would be wrong to tie you to one particular style or genre of music. How do you see your musical progression and do you have a particular philosophy towards sound design?

I used to be very concerned with my tracks being great to play on the dancefloor. This actually led me to become pretty depressed because I thought I was making bangers, but on the contrary my music is inherently moody, and heavy on atmospherics. When I stopped caring so much about how my music would be received/who would play it and became much more concerned with making music I liked regardless of how others might react or interpret it, not only was I much more satisfied with my output, but people started to become much more interested. Funny how that works I guess.

You’re currently signed to Orca records – How did you come to be signed to the label and how did you establish a working relationship with them?

The owner of Orca approached me with this idea for the label that essentially revolved around putting out my music, promoting me as an artist, and being a base of operations for my creative output with his guidance. I got a deep impression that he really was committed to pushing me as hard as possible and had my best interests at heart. Having never really had a “home label” I was certainly open to the idea.

We decided to kick things off with ‘The Ghost’ b/w a remix by my long-time pal Headhunter, and it was very well received and supported, after the success of that record I was very content with the label as a home. Since then Gamma Rain/Medicate, and most recently Immunity/Squeeze have been released to similar if not greater acclaim and it’s been a very positive and inspiring experience for me. I actually owe a lot of my successes in the last 2 years to Orca.

Do you have any plans to release records on any other record labels, and which would be the ultimate imprint to release on?

In May I will be releasing an EP with Berlin via Toronto label New Kanada run by techno mainstay Adam Marshall, the tracks on that EP are some of my most exciting and developed work. I cannot wait for it to drop. My dream imprint to release on has always been Warp, someday maybe…

Now that you’re living in Europe, can we look forward to any interesting collaborations and projects in the near future?

Yes. I currently have four VERY exciting collaborative projects on the go, only one of which I will have to refrain from talking about here. Ever since I was collaborating with Bombaman I haven’t enjoyed working on music with anyone else at all, but in the last year or so I have had experiences collaborating that have changed my opinion of it dramatically. In the very near future you can expect to see the fruits of my collaboration with Skeleton Bone from Toronto under the project title ‘Ambalance’ which I won’t attempt to describe here.

There is a collaboration with Kevin McPhee in the works and I have been working on a folk-y sort of project which combines acoustic guitar and live electronics with a long-time friend who produces under the moniker ‘Bedroomm’, the first EP of which should be ready sometime this year.

Can you give us an insight into what you’re listening to at the moment? Any particular artists, labels or tracks on rotation?

Right now I’m vibing a bit of Tim Exile, A.A. Bondy, Listener, The Field, Machinedrum, and I’ve always got Actress in heavy rotation (can’t wait for the new album). My tastes, like my sets, are all over the place but lately I’m just enjoying simple songs with interesting character.

What do you get up to when you’re not writing music?

All my life I have been a video games addict, but of late I’m really big on just hanging out with friends honestly, I get a lot of good energy and inspiration from just being around people I respect and have fun with.

I suppose anything is possible.