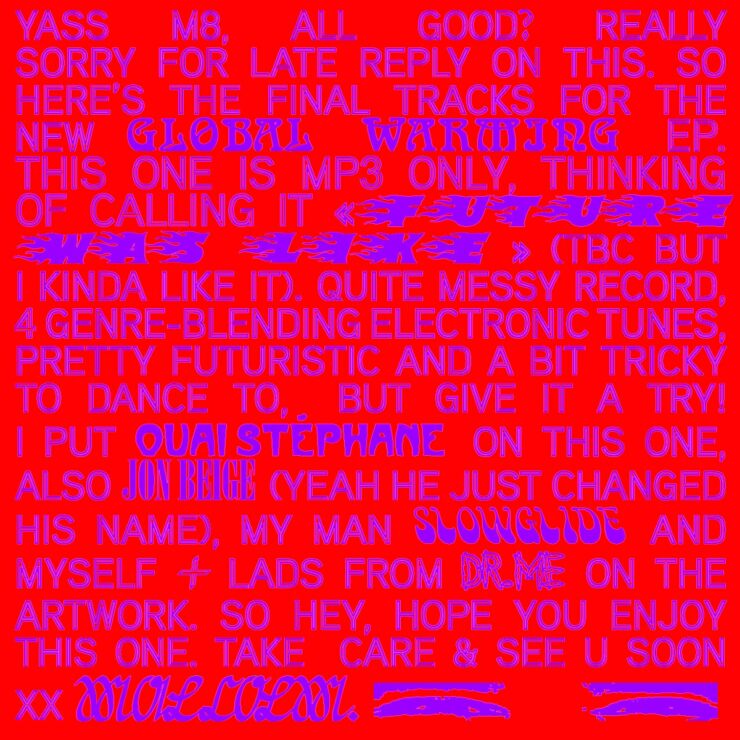 Over the past 5 years, Global Warming head honcho Malcolm has worked steadily on building his label with unmistakable identity. Expertly evaluating every step of the way without falling into the common mistake of being driven by haste. The result is a solid imprint that has all the requirements to stand side-by-side with other French imprints that venture into obscure electronic music.

Most of the artists that have helped to shape Global Warming are featured in ‘Future Was Like’ – a mini-compilation of previously unreleased tracks. Jon Beige, one of the label’s most prolific affiliates, is behind our track premiere ‘The Sake of Talking’ – recalling a style of music that Italian cheesy electronic producer Gigi d’Agostino used to call ‘Lento Violento’, but there’s much more besides this.

A recurring Portuguese vocal and always more intrusive whirls and bleeps slowly twist the track’s continuation. The track has a disorientating and psychedelic flavour yet sounds very sharp, denoting particular attention to sound design, a quality that Beige already showcased several times in his previous releases.

‘Future Was Like’ is out now on Global Warming Records.