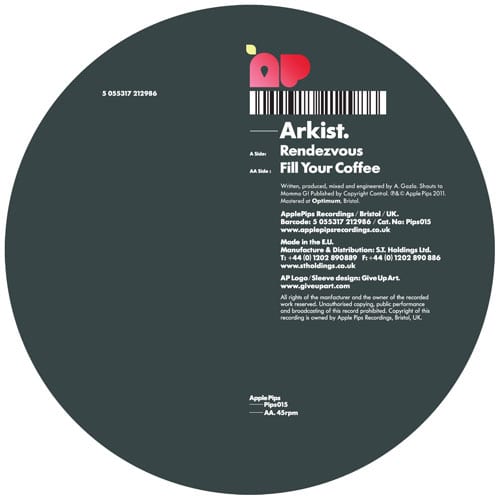 The Apple Pips imprint has been pushing cutting-edge dubstep, techno & bass music for only 3 years now, but the labels discography reads like a ‘who’s who?’ of contemporary electronic music. As the brain-child of Bristol based pioneer Laurie Osborne a.k.a Appleblim, whom came into the limelight when ‘Skull Disco Records’ was in its prime, we can expect a diverse appreciation of flavours on the tracks he signs.

The label has seen music from the likes of Martyn, Jus Wan, Ramadanman, Orphan 101, Brackles & Instra:mental to name but a few, and now Arkist is joining the ranks. An artist that has had many a nod from the heads, but is only just beginning to see the coverage and releases he deserves, Arkist is another Bristolian that likes to keep the lights down and the speakers up. Collaboration’s with heavyweight ‘Komonazmuk’ on ‘If Symptoms Persist’ were the first of his tracks to hit vinyl in early 2010, and another deep record hit wax on ‘Immerse Records’ later that year. With that in mind, it would seem that the tracks signed by Apple Pips are the artists most polished and acute to hit my turntable thus far.

This two track EP offers up something a little different from Arkist’s repertoire. On the a – side we have ‘Rendezvous’, a slinky synth laden adventure into 2-step that appeals as both emotive headphone music, and bouncy dance floor anthem. Catchy vocal snippets and cheeky rim shots carry the mood while kicks and bass hold the rhythm. The flip feels like Arkist’s interpretation of mutant funk, achieved so well by the likes of Opolopo and Ad Bourke, it stamps his character all over. Not afraid to use space and time to build a vibe, soft synths and trickling arpeggio’s give way to heavy descending B-lines. It’s sexy music, the type you dim the lights to, sit back on the leopard skin couch, pour a glass of wine and hope your partners diggin’ your groove.