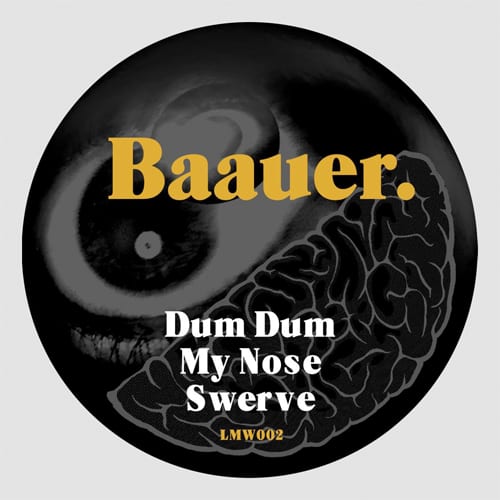 Early this year, Glaswegian producer Rustie released a very special BBC Essential Mix. A delicately chosen array of trap and dance tracks that were spreading across the internet like wildfire. Ranging from dumb hip-hop bangers to neck snapping beats, one song emerged and caught everyone’s attention: Baauer’s ’Harlem Shake’. The menacing and beefy track was instantly picked up by the legendary Diplo and was shortly released on his label Mad Decent along with a B-side entitled ‘Yaoh’, making the 23-year old New Yorker, along with Hudson Mohawke and Lunice, one of hip hops most exciting prospects and the faces for innovative Glaswegian label Lucky Me. ‘Dum Dum’ is Baauer’s first release. Everyone make room, the golden child of Trap has arrived.

The 12’’ starts off with ‘Dum Dum’, a sinister beat infected by repetitive 808 snares that rumble across the track alongside a slow, albeit jumpy bass rhythm. The use of non-musical sounds- a camera flash going off, a lion’s roar, a smashing glass – are now trademarks in Baauer addictive and obnoxious production, grabbing the listener’s attention right before the track explodes.

Happy hardcore music may be the last thing most dance music fans would hope to hear when walking into a club nowadays. Nevertheless, the second track ‘My Nose’ can be conceived as Baauer’s personal take on the largely forgotten subgenre, redirecting the sound and quite brilliantly making it his own. Starting off with a fast, chavvy synths, the track builds up to a fairly outrageous vocal sample shouting ‘Drugs, hoes and coke in my nose’, before erupting into a monstrous trap groove.The release winds up with what is perhaps Baauer’s best constructed beat, ‘Swerve’, featuring a sinister ‘screwed up‘ beat filled with vox samples and bursting 808s. The track’s an invigorating seven minute workout that  may best be listened to while waving your middle finger through the air.

As trap continues to grind across dance floors, Baauer will be an inescapable name driving the relentless beats, with this release tying up the subgenre’s current thrust with a certain vulgar satisfaction.