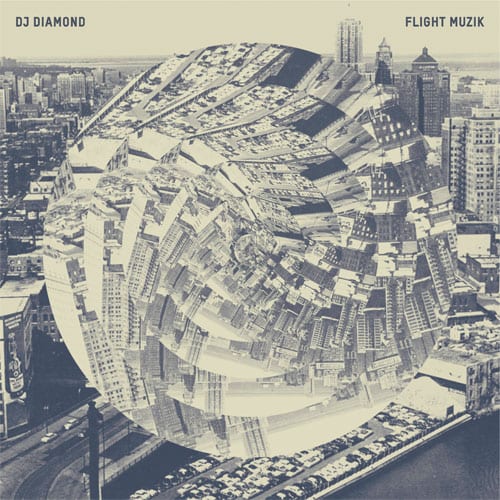 Like it or not, Footwork is here to stay. The ferociously abstract offshoot of Juke music, grown in symbiosis with the virtuosic (and fairly self-explanatory) dancing of the same name, has been a presence on the insular Chicago scene for some years. But its appearance on UK shores can be traced back to early 2010 – not least through the efforts of Planet Mu mastermind Mike Paradinas, who embarked on a series of releases representing the cream of the Footwork crop to the wider world.

Far from a passing fad though (as it was tempting to say at the time), global interest in the music has grown steadily over the past 18 months, seeping into the consciousness of both producers and DJs until its influence is almost everywhere you turn. Planet Mu have kept up the pressure too, and having covered the biggest names on the scene (DJs Rashad and Spinn come to mind), seem to be turning to slightly lesser-known gems. Enter Paradinas’ latest finding, DJ Diamond, whose productions cleave strictly to the norms of the genre – unstable constructs built from samples and drum machines, rattling along at 160bpm – but manage to fill in all available gaps with subtle, unavoidable weirdness.

The West Side producer (Chicago’s geographical divisions seem to be as strict as London’s postcodes), born Karlis Griffin, pushes the standard techniques of Footwork into surreal zones. Looped vocals are atomised and reconfigured into stuttering, a-rhythmic textures, or micro-edited until vowels and consonants become alien bodies (‘Rep Yo Clique (Remix)’, ‘Speakers ‘n’ Tonguez’); sampled chords are processed and detuned into a woozy mulch (‘Pop The Trunk’) or locked into brain-boring drones (‘Snare Fanfare’); and throughout, the surrounding percussion is subtly, wickedly processed, twisted into disarray through flange, phase and claustrophobic reverbs. These tracks are deviant, make no mistake: finding the downbeat can be a task barely worth undertaking. ‘On’ and ‘off’ are perfectly balanced but never settled, much like the hallucinatory blur of a dancer’s legs while in full flow.

That’s not to say Griffin doesn’t touch the standard bases here. There’s RP Boo-esque stompers (‘Horns’) and the requisite amount of soul-sampling (‘Uh’, ‘I Choose You’). Perhaps the most left-field contribution, though, comes from across the pond: ‘Decoded’ and ‘Wreckage’ seem to pull their sounds straight out of Belgian hard house – think hoover synths and gabber kicks – reuniting new and old worlds in a way that’s one part genius to every two parts hilarious.

‘Flight Muzik’ takes its title from the crew to which Griffin belongs, but it’s also as apt as any description of the music I’ve heard. It’s at its heaviest when it’s close to weightless, like a jumbo jet made out of scrap steel and bits of tarpaulin; totally illogical but all the more compelling for it. In spite of the album’s numerous innovations, though, the raging battle trax will always win for me. ‘Burn Dat Boy’ is a formidable machine of sinister, rasping brass and thundering subbass, impressively streamlined but distinctively Diamond. This is still music for the dancefloors of Chi-Town, even though its maverick tendencies are likely to find it fans from much further afield.