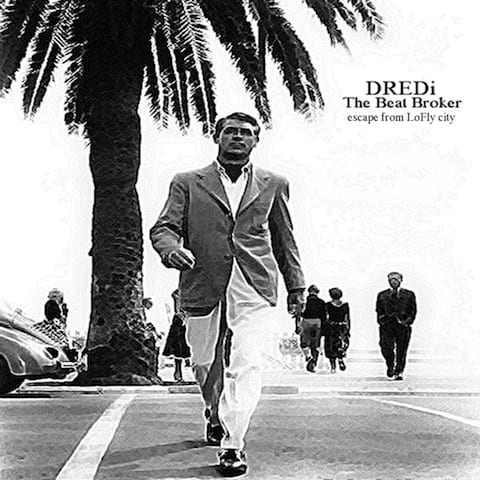 “There was a time when I would lose my temper regularly, when I felt that I had to stand up and say something about the things that made me angry. I used to take a stand and rage against injustice all the time. Now I know how things will turn out and that has taken the fun out of losing my temper. There was a time when I could derive a certain pleasure from trying to work out what to say and do next. But not anymore…”

DJ DREDi is a ‘beat broker’ from Northampton, England. He started playing around with music in 2006, but only recently has he truly found his feet in his music. He produces sumptuous lo-fi hip hop beats and ever since stumbling accross his music I can’t stop listening to his banging 90’s gangster influenced beats.

‘Escape from LoFly City’ is his latest album on Sassbolgna Records. You may recall this Sassbolgna from our feature on S.Maharba‘s ‘Organs’ back in January 2010. If you liked that, you’re going to love DREDi.

‘Escape from LoFly City’ is essentially an instrumental cinematic comicbook journey. Each song features classic quotes from films such as ‘Lock, Stop and Two Smoking Barrels’ [1998] and ‘Chopper’ [2000]. The third track ‘Nullifidian’ features that favourite line “We grow copious amounts of ganja jaaaaah”. This sounds cheesey, but when the beat drops in ‘Method’ you know this is straight up British gangster music.

In true traditional Sassbolgna form, ‘Escape from LoFly City’ has been released on cassette, as well as digital. No doubt the cassette adds layers of graininess to this already lo-fi beatmakers sound. A CD version will be available soon so go check out Sassbolgna Records and grab a copy.

What grabs me about this album is DREDi’s ability to edit such old sounding samples such as the violins in ‘Nullifidian’ and lay them on top of such a great beat. Classical music and beats, perfect Sunday morning music.

Download ‘Nullifidian‘ from IA now for free, and check these beats out. If you like what you hear head over to his Bandcamp page and listen to the whole album before buying it. I’ll leave you with a few words from beat maker himself on his forthcoming album.

“The new album is going to be a comicbook beat tape, kind of developing the idea of “escape from LoFly city” where the beats are telling a story in their style and sequence along with the clips of dialogue, but this one is going to be based on the occult, mysticism and symbolism around the people that associate themselves with the eye of providence, all seeing eye, eye of Horus whatever you want to call it. But it isn’t a conspiracy theory thing, its going to be a story told in sound, numbers, words, and images the beats will be the soundtrack to all of it.”