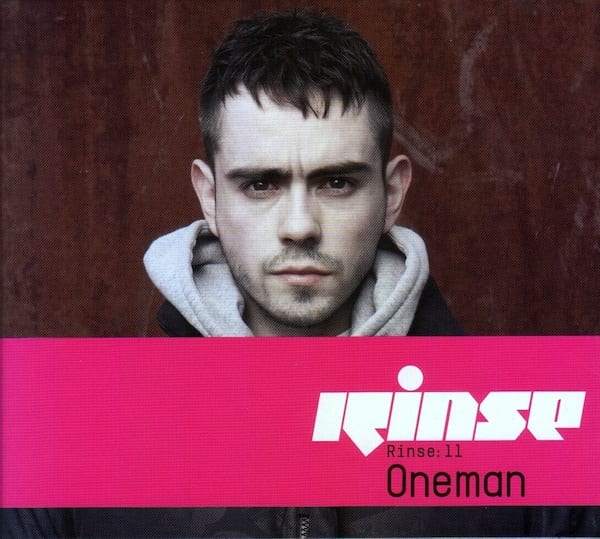 Rinse compilations more often than not serve as notable landmarks in the constant shape shifting of London’s bass music. Whether that’s the foresight of funky’s rapid introduction and continual growth with the Supa D and Marcus Nasty volumes; or the mixing pot sets that are now a staple from Alexander Nut’s, and now Oneman’s, offerings.

Oneman gained his name by single-handedly re-introducing garage to a new generation, bringing it back to the UK’s underground dancefloors. Eliminating the premise of it being a dirty word, or even a laughable selection. Certainly for myself, growing up outside of it’s London home and being far too young to have been exposed to much more than Craig David or ‘Flowers’, a whole new world of crate digging was exposed.

This comp is a statement though, Oneman has become known for this, but if you listen to his recent shows he’s about looking forward more than ever. The current sound of London is represented, and if anything it stands up far more than a mix of ‘classics’ could – and will probably serve as something far more memorable. I would term stuff like Kode9’s ‘2 Far Gone’ and Zomby’s ‘Rumours And Revelations’ modern classics, even though I’m probably being far too premature on this and may live to regret it. Too make a mix of purely current sounds was a bold move, but I think he pulls it off. Documenting the now is important and it certainly makes this release more necessary.

I swear Oneman’s name is misleading though; his abilities with mixing are testing my trust in him. Surely only one man can’t mix this quickly, this precisely. It must take a team of people, spending hours in a boardroom fully zoned into a mantra of ‘blue sky thinking’ t pull something like this off. I hope that statement stinks of hyperbole, but that you kind of get the pint. Obviously with any pre-recorded mix, you can never really tell somebody’s skill, but if you’ve ever seen him out, or even just caught his radio show – the man isn’t natural. The blend from Martyn’s Bittersweet mix of Acid Bells into Geeneus and Dynamite’s ‘Get Low’ is testament to his ever-challenging selection. Mans got foresight!