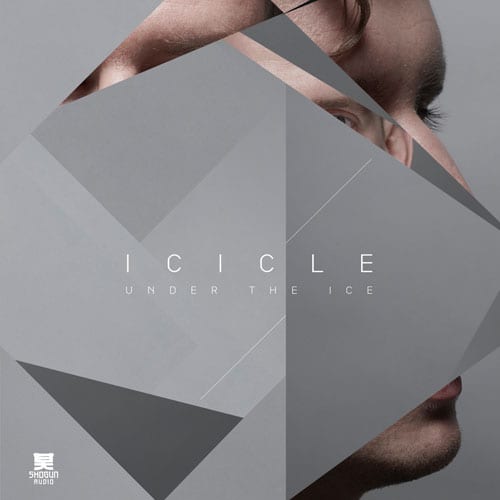 After several years on the come up, the last eighteen months have seen Icicle AKA Jeroen Snik AKA Freeze continually scale new heights; avoiding the perils of being just another drum n bass producer aping dubstep’s furore. After a bevy of envelope-pushing releases on Critical, Shogun Audio and Osiris Music, ‘Under the Ice’ marks Icicle’s first foray into album territory.

In what has become his signature sound; Icicle’s frenetic, percussive-laden productions drift between sub-zero chasms, heaving bassweight and breakneck twissups. ‘Under the Ice’ is no different.

Featuring a slew of heavyweight guest appearances, ‘Under the Ice’ opens with none other than Detroit crooner Robert Owens appearing on ‘Step Forward’. SP:MC then lends his hosting gusto over the utterly banging ‘Dreadnaught’ – surely the rowdiest 170 tune of the year. DRS absolutely slays ‘Bitter Taste’.

Regardless of the tempo he’s working at, Snik always negotiates his stomping, tectonic pressure with a bold awareness of the dark techno ethos that heavily underscores his tunes. The sullen ‘Nausea’ and ‘Condense’ are perfect examples – driven, direct and equally desolate.

Historically, it’s been difficult to pull off the 140/170 hybrid in the long player format, with only Breakage’s ‘Foundation’ and Jack Sparrow’s ‘Circadian’ coming to mind as recent successful outings. Icicle simply balances the to and fro of both styles with cunning verve; resulting in a fluid continuity.

Whilst ‘Breathing Again’ and ‘1,2 Go’ readily illustrate Snik’s astuteness within the dubstep framework, only the former hits as hard as last year’s ‘Miminal Dub’/’Xylophobia’. Regardless, ‘Under the Ice’ brings Icicle’s techno leanings well into the open, allowing the Dutch-cum-UK producer to push some intricate new ground, including his most vocal-centric tunes.

It’s unlikely any other producer could’ve seduced Robert Owens for slots on ‘Step Forward’ and the sprightly ‘Redemption’; turning an unlikely combination into a gallantly fresh realisation of DnB, techno and dubstep.

‘Under the Ice’ comes off as more an outlet for Snik’s drum n’ bass prestige (‘I Feel You’, ‘Top of the Page’) rather than for his recent insight into dubstep’s cavernous reach (‘Breathing Again’). Thereon, ‘Arrows’ updates the mercenary crime-jazz of Photek’s ‘Modus Operandi’; fusing a real-time sense of immersion with ruffneck acceleratory outbursts.

After the ten minutes’ silence that follows the homesickness of ‘Europa’, the marvelous ‘Condense’ closes proceedings, oozing Panorama Bar vibes in a Ben Klock-esque trip into the unknown.

Combining his love of vintage Photek, Optical and Detroit with the slower escapades of SP:MC and Kryptic Minds, Icicle’s take on this amalgam rarely falters. ‘Under the Ice’ straddles the right mix between excellent production values and personality, reinforcing that this record is built for both the dancefloor and back-of-the-bus headphone listening.

Clocking in at 60 minutes, ‘Under the Ice’ is efficient, concise and malleable. Icicle’s exhibition of control is for the most part world class: he knows when to hold back and when to brockout.

Whilst there’s a real possibility that 2011 could well be Icicle’s year, ‘Under the Ice’ hints that Mr Freeze’s best 140 is still yet to come.