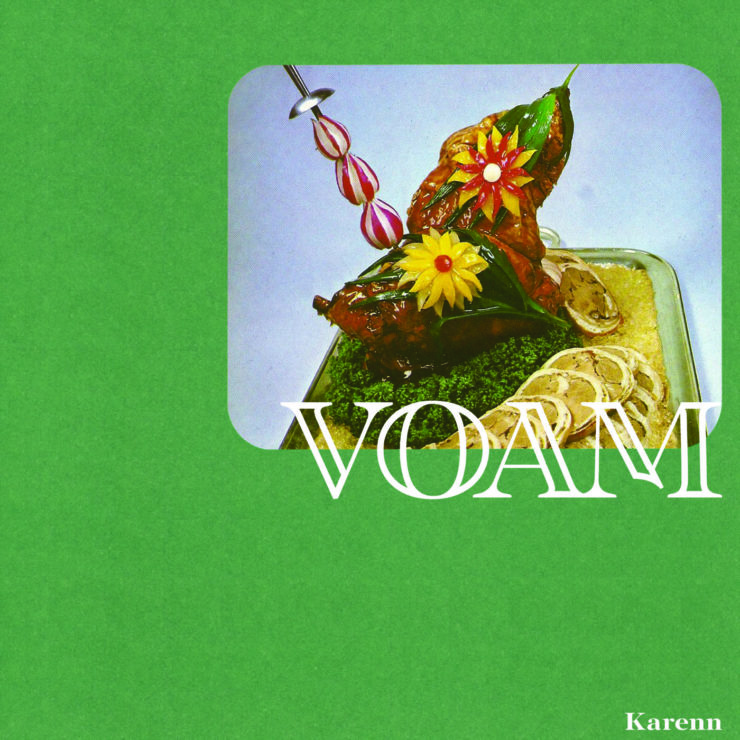 Karenn, the duo of Pariah and Blawan, stalwarts in their own right, have steadily been releasing and working on a new imprint Voam, to which there’s been an EP and a compilation of live cuts of their collaborative tracks on a sub-label Voam Club Archive – Grapefruit Regret is the first cohesive piece of material and also their first album.

There is no question about it, this is a fucking banging collection of tunes – culminating in hard, gritty and pounding techno. Grapefruit Regret is the best reciprocation of why Karenn dominate dancefloors, pounding techno from a complex arrangement of synths that thumps through speakers and shakes little Benny out of a k-hole… or knocks him into one, which is impressive when seen live, the rawness of it all – so why not release a body of music that showcases how they feed off of each other and really tear it all down?

Euphoria is distinctly laden in little peak time moments throughout this LP, building and sprawling, the culmination of which ‘Crush The Mushrooms‘ is probably the best example of. In the right moment, heard in a club on a dutty soundsystem, with just a sprinkle of your picked poison and you would you lose your shit.

Moments like ‘Peel Me Easy‘ and ‘Cloy’ are what can be called more “subtle” moments, those times when you can stretch out your calves from the heavy shuffling and fist pumping, to go grab a sugar-free whatever-the-fuck-flavours are now in the arsenic gangrene of Red Bull, but even the more calmer tracks are still case in point of a meaty piece of Greg’s sausage roll, and still draw on fast bustling techno.

And that is that – Blawan and Pariah separately, have been instrumental in creating and formulating some of the most interesting music that is of a scene’s time before bubbling up, inventive moments like ‘Crossed Out‘ and ‘Why They Hide Their Bodies Under My Garage‘ are but a few.

As Karenn, Grapefruit Regret does its job, but feels stuck within the parameters of the club, hard to immerse yourself in when not in that space or frame of mind. The translation to a creative work like an album doesn’t necessarily need to have range, but given the boundary pushing both have done previously, you do expect them to go outside the constructs placed in their own wired analogue haven.

Saying that though, perhaps its humerus track titles and the aforementioned Grapefruit Regret are just that, sour discords not to be taken seriously, but poked out and played in the right essence.

‘Grapefruit Regret’ is out now. Order a copy from Bandcamp.

Discover more about Karenn and Voam on Inverted Audio.