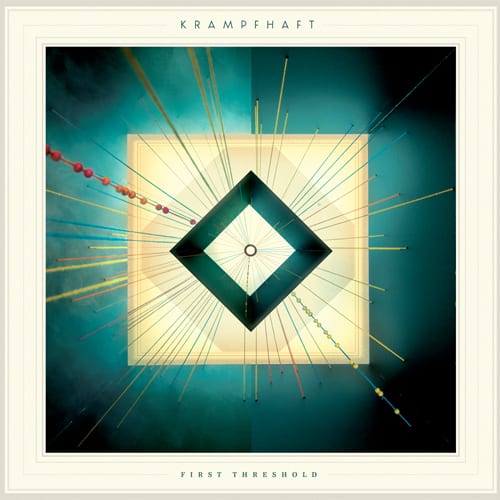 I remember a tweet from Om Unit towards the end of 2011, reacting with amazement that Dutch producer Krampfhaft hadn’t been given recognition in many publications end of year lists. I wholeheartedly agreed – the Makin’ Magic and Spit Thunder EPs were fresh, interesting sculptures that, quite simply, didn’t sound like anyone else.

Melding together a multitude of styles – the frenetic energy of footwork, the hyper-gloss melodies from purple dubstep and with a dose of hip-hop for good measure – the Utrecht based artist has since attracted a healthy amount of acclaim and publicity, one that has more than repaid label Rwina’s initial faith. Krampfhaft returns to the forefront with the First Threshold EP – a collection of tracks showcasing his usual bombastic enterprise with tenacity.

While the Spit Thunder EP delved into juke and footwork, First Threshold is definitely influenced by trap-rap, the latest flavour of the month making waves in the UK and across the Atlantic. This isn’t to say the EP is indebted to the genre – far from it. Krampfhaft takes the premise and moulds it to fit his agenda – creative, crisp production maintaining his originality. Opener ‘Bones’ finds itself somewhere between Fatima Al Qadiri and Lunice, a laid back roller, with serene, floating synths above the rapid-fire percussion.

‘Cork’ unleashes the aggression into First Threshold, while ‘In A Dream’ is solid enough, laser beam synthesizers screaming out with typical panache. It’s penultimate track ‘Marram’, however, that is the shining star of this EP – harnessing the brash energy and ferocity we’ve come to expect into an altogether more placid creature. It’s perfectly weighted – luscious, sprawling melodies and reverb-laden percussion, with flurries of hi-hat energy keeping things moving. It’s truly impressive, even for Krampfhaft, and signals the growth of the producers sound. There’s also a case to be made for ‘Twin Prime’ being the most ridiculously effective upfront track he’s ever produced, but that doesn’t really need explaining, does it?