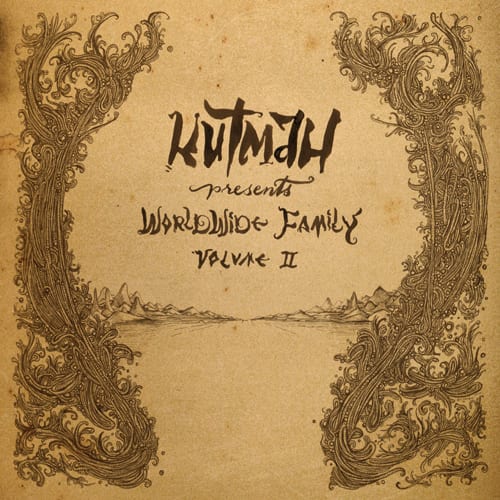 L.A expat Kutmah has gained an almost cult-like reputation for his endeavors, an accolade which was long overdue, frankly. Deported from the U.S, his ‘A New Error’ volumes released last year contained a thoughtful, broad spectrum of influences, showcasing not only his penchant for selection, crate digging and mixing but consequently some of the best-unreleased material from his peers. This was all on top of being an NTS host and a visual artist, as well as an occasional producer.

His deft touch hasn’t gone unnoticed, and who better to showcase his style than Gilles Peterson’ Brownswood label. The former Radio 1 DJ’s compilation series, Worldwide Family, was given its inaugural release by Lefto & Simbad, and contained gems from the likes of Afrikan Sciences, Zed Bias and Seiji. For the second volume Kutmah has decided to focus primarily on the scene that he was forced out of, and as a result many of his L.A contemporaries feature, but there’s a significant nod to the UK and other realms too.

It’s a selection that combines the usual suspects with some fresh faces, Kutmah playing it relatively down the middle. One-Handed Music’s Mo Kolours kicks off the EP with a cloud of smoke, ‘Ridda Mountain’ murky and tranquil, almost sanguine in its outlook. The curator demonstrates his on-point selecting skills throughout, with Mo Kolours, Slugabed, and Dakim, to name a few, all coming off the back of excellent releases.

Things really get going, however, with the introduction of Slugabed’s excellent ‘Sex’, immediately nostalgic and euphoric, it opens up the mood to a sunnier, lighter complexion. There are some great moments of discovery rooted in the compilation, such as Sam irl &  Ritornell’s ‘Three’ and Jonwayne’s remix of Bruce Haak’s ‘Ancient Mariner’.

Kutmah starts off slow, before upping the mood and tempo, and then releases, preferring to create smaller, but more numerous arcs of thematic style. There’s a lot of humanity behind the record, Shash’U’s ‘LA’ a pining, sensitive tribute to the city.

There’s also a chance to enjoy some previously unreleased material from luminaries such as Samiyam and Flying Lotus, although, inevitably, there’s nothing you haven’t heard before from the real big guns. However, it’s more likely that you are going to find something new and interesting on the compilation, and that notion alone should be enough to warrant a listen.