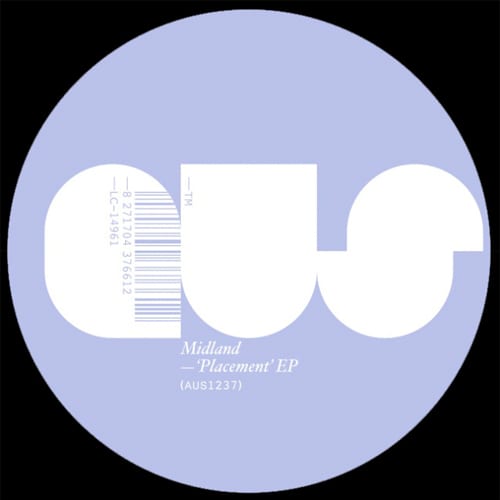 Harry Aguis, aka Midland, occupies an interesting space in the dance world. Within two years he’s released a series of top-quality House records alongside an impressive selection of great remixes for the likes of Caribou, Julio Bashmore, Lone and many more. As a producer he has yet to release something that could be called significantly different from current Dance trends, but the consistent quality of his tunes both on and off the dancefloor halts that from being a true criticism of his work – after all, the ‘contemporary sound’ from which the originals diverge wouldn’t be popular in the first place if there weren’t a certain amount of producers furthering it with a great deal of finesse.

Up until this point, and excluding his excellent collaboration with Ramadanman ‘Your Words Matter‘, Midland’s releases have always been characterised by a certain density and darkness, and with Placement he begins to lift the veil, these tracks having a certain airy quality to them despite retaining a depth and weight, which always makes Midland’s tracks killers on the dancefloor. The slow-building ‘Tape Burn’ is a perfect entry to this accomplished EP, loping forward on well applied percussive textures and gradually accumulating an ambient hum, subtle finger clicks keeping time, a dusty beat and a subdued bassline which come together to form a warm and rich listen with a great deal of movement. Add that to the dawn-breaking pause midway through and the beats that build anticipation as the track draws to a close and you have a near-perfect opener, fluidly preparing the listener for what’s to come while serving as a brilliant track in its own right.

The two central tracks on the EP serve as the real dancefloor meat, and both are sensitively handled House tracks that build a strong groove while retaining a certain delicacy, which ensures the tight detailing is just as present as the staggering beats. ‘Placement’ is another slow-build, with a heavy drum pattern underpinning a rising synth line and a whole range of detailed sounds. Every so often a new layer comes into play expertly; a looped clap, a forceful snare or a woozy breakdown that simmers, threatening to boil over, beneath the fabric of the tune. All these sounds lead up to the showstopping synth-line which, while simple, is very effective and dominates the second half of the track. Afterwards comes the densest and moodiest cut on offer, ‘What We Know’, and it’s all the better for being both of those things. An earworm vocal snippet lays a slight hook over another bed of rich and masterful percussion, while simmering detuned synths make an unexpected but very welcome appearance at the breakdown.

The EP goes out with ‘Tail Ender’, a novel departure from 4 X 4 to a syncopated 2step beat. Something feels off-kilter about the seesawing synths and unstable percussion but this works towards a great atmospheric track that undulates rather than moving forward, proving that Midland can work magic even outside of his tried and tested House beats. The tracks on offer across Placement may not grab you on first listen, but they’re all worth repeated spins. To pay attention to Midland’s finely-woven webs of sound, where every layer is perfectly treated and applied, is to realise this is more than just a contemporary release somewhere in between House and Techno, it’s another jewel in the crown of a fantastic producer who crafts straightforward dance music with rare skill and force.