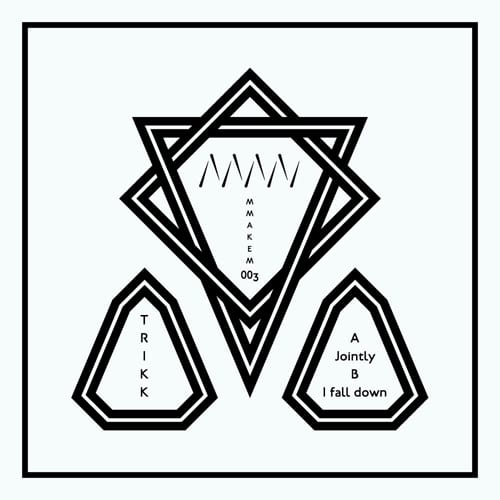 George Fitzgerald’s ManMakeMusic is still just getting on its feet, but with this newest release, a debut from Portugese import Bruno Deodato, the label proves itself a real force to be reckoned with. Although you may not associate the darker fringes of Bass and Techno with Southern Europe, Trikk shows a lineage grounded in the last ten years of underground dance music, and these two tight tracks show off that heritage with style.

Even though this is his debut, Trikk rapidly establishes a clear voice through his spare style, opening out A-side ‘Jointly’ with a ferocious kick drum and skeletal clicks. The track would clearly be monstrous on the dancefloor, with a deep bassline paving the way for cut-up Garage vocals and searing old-school synths that are sequenced over the latter half of the track. These synths are particularly note-worthy, constantly shifting the track’s focus while taking nothing from its powerful groove.

On the flipside ‘I Fall Down’ is a more unusual 4-am cut, introducing itself with sampled applause and a full run-through of the vocal line that haunts the seasick synths underpinning the tune. Tight drum programming adds to the punch but it’s the details here that really count; a far-off sax cry, perfectly syncopated claps in the track’s second half, and that ungodly heart-in-mouth moment around two-minute mark where the whole track drops out for four bars, springing back to life after a lethal bass stab.

Although Trikk doesn’t tread any radically new ground on this release, his production chops are clearly strong, demonstrating an impressive grasp of space and timing, and his particular fusion of Techno, House and Bass music definitely cements him, along with the nascent label, as ones to watch this year.