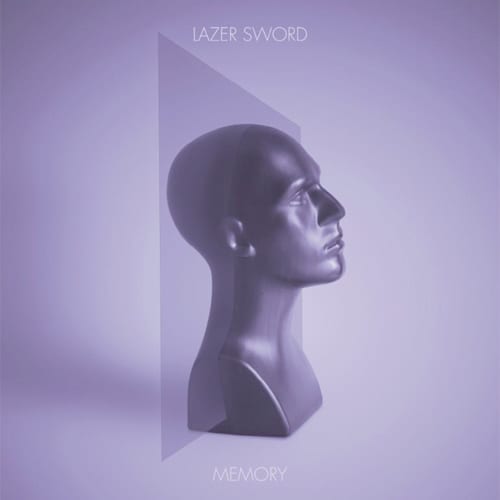 Duo Anateus Roy and Bryant Rutledge work together thousands of miles apart as Lazer Sword. Having crossed paths at XLR8R, their initial collaborations took in a direct influence from hip-hop, and their debut self-titled LP was well received, but fell just short of the mark of a classic. It also did well at showcasing the potential for crossover material. ‘Memory’ is a steady, significant departure from their hip-hop orientated first album, hinted at over the last year through single releases and remixes. There’s a very particular aesthetic that the duo have gone for, the sound rounded and full, emitting warmth but feeling disconnected simultaneously, almost in a sci-fi, android-like fashion. There’s quite a heavy science fiction tint on the album through its timbre, especially in beatless affairs like ‘Out The Door’. There are slight twists and turns, but at its core Memory pulls you in with it’s straight up infectiousness.

Juke, footwork, and even slow-moving drum & bass are hinted at in the opening flurries, ‘Toldyall’ and ‘Missed A Spot’ representing these new shifts in vision. Despite the move away from hip-hop’s mechanism, there remains enough of its typically laid-back atmosphere to give a unique tint on ‘Memory’. Lazer Sword are always moving at their own pace, and tracks such as ‘Point of Return’ and previous single ‘Sounds Sane’ introduce intense elements in a carefully controlled environment. This also allows a lot of scrutiny on their sound palette, which is a great success, so much so that they don’t really sound like anyone else at the moment, taking in contemporary influences and then reflecting them through their own prism.

Collaborations with the likes of Jimmy Edgar and Machinedrum are slow-moving, low-slung affairs, showcasing this penchant for controlled intensity well. ‘Let’s Work’, in particular, has plenty of the typical Edgar sleaze on it, and when dichotomised with the pearly, sanguine beats of Lazer Sword it makes for an interesting combination. ‘Pleasure Zone’, meanwhile, sounds like a track influenced by Edgar directly. It’s a strong, highly successful album. Final number ‘People’ combines much of their previous flicks and acidic touches into a no-holds barred effort, 4 X 4 at its best. Memory works well both on the dance-floor and within the confines of more relaxed listening, Lando and Lowlimit deserve great credit for pushing on from their original aesthetic.