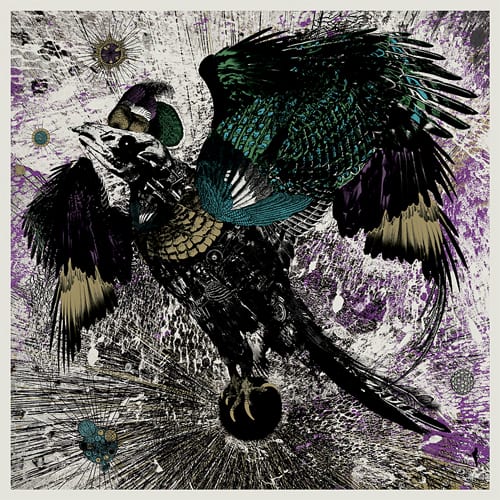 Old Apparatus are clearly sonic obsessives. Across their releases the anonymous quartet have hacked their way through a dense collection of influences. The music they create  not only suggests a passionate dedication to the various strands of contemporary production found in dubstep, ambient, noise, hip-hop and more, but a deep investment in its history. Of course, this  impressively eclectic musical palette doesn’t guarantee tasteful results by any means. The trick is to realise something new from the synthesis – something greater than the sum of its parts.

From the start, Old Apparatus have tossed sounds at a canvas in an wildly aimless fashion. In the wrong hands this would be horrific, but here it is disorientating in only the most thrilling way. Sprawling trackless across two sides of vinyl, their brims with a wide-eyed passion for sound design and its limitless strands of possibility. Crafted crackles merge into metallic shafts of ambience. Highly un-danceable beats flurry over field recordings. Amidst this there’s a lightness that suggests restraint, that we’re not quite being treated to every single idea Old Apparatus have ever had simultaneously.

Their greatest moments tap into that cosmic fascination that undeniably resides in us all. Their self-directed video may have been made from milk and food colouring, but its planetary  visuals feel epic and awe-inspiring. The weighty soundtrack adds a tasteful edge of impending doom to the scene, forcefully sparing the cosmic cliches. It’s like looking up to the stars when you’ve had too little sleep, or one of those husky Carl Sagan monologues but without all of the hopeful bits.

The Alfur EP is Old Apparatus’ third release on their newly realised Sullen Tone label. Broadly speaking it pulls off the same wilfully chaotic approach as its predecessors. Cauliroot brings uses and airy field recordings before chiming bells meddle ingeniously with a staggering beat. Like that Burial classic, Lingle loops a tight vocal in a way that shimmers beautifully against broad-brush strokes of ambience and noise.

However the appeal of this anarchy sometimes loses its edge. Schwee begins in earnest with bristles of radio static and a disorientating fog  vocals. Yet instead of developing these intriguing elements they are swallowed into synths which force a new path. Similarly, Boxcat’s initial appeal is aggressively submerged in an overwhelming array of noise. Old Apparatus usually make light work of proggy diversions and sidewinding song structures. Yet in these instances they distort their musical path when it’s at its most fascinating in a way that is more frustrating than tasteful. In this way, some of Alfur comes off more like a hastily welded hash than a carefully curated selection.

As the latter in a series of EPs, I’m inclined to think of Alfur as a closet clearing exercise before their forthcoming album. In this way it stands better as a a selection of loose offcuts than a truly cohesive release. Nonetheless, it’s an engaging and occasionally fascinating insight into the  the sonic range of a band still in its development. And when they do hit it right they deserve the starry-eyed appreciation they often get.