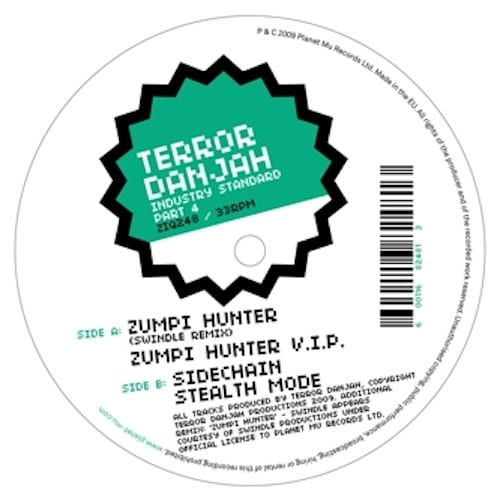 Terror Danjah is seen by most people, including us, as one of the greatest grime producers of all time, with beats that most MC’s would give their left legs to jump on and an ear for melody that is almost unparalleled in the grime scene. His greatness lies in the fact that he is able to write a beat that has the necessary aggression and urgency that a grime instrumental needs at the same time as balancing that aggression with catchy, alomst pop friendly, hooks. The always exceptional Planet Mu have decided to honour him by releasing “Gremlinz”, a compilation of his best instrumentals taken from his extensive back catalogue. This four track EP which preceeds the compilation’s release is made up of four tunes which are either new or were previously unavailable on vinyl.

The A-side is dedicated to the Swindle remix and VIP version of Danjah’s most accomplished production, Zumpi Hunter, a tune that has been popping up on all sorts of mixtapes over the past few years. If you had to pick any tune that Joker wished he had written, I’m guessing it would probably be this one. Proto-purple anyone? The Swindle remix puts a nice gloss to the original, making the most of the melody and toning down the ferocious chorus of the original. There’s even a keys solo in it and that’s definately something you don’t hear every day in grime. The VIP, on the other hand, does pretty much the complete opposite and the aggressive, syncopated chorus is the focus of this tune with the lead melody seeming to take second place. VIP’s can sometimes seem to be a bit of a waste of time (producers can overwork their tunes, losing the magic of the original rather than improving) but this is definately one that deserves your full attention.

The first tune on the flip, “Sidechain”, does exactly what it says on the tin. Named after the effect used by producers to a create a breathiness in tracks, the elements of the track seem to hyper-ventilate under the power of the kick drum pushing everything out of the mix. Rhythmically this is the most interesting track on the EP, nervously switching between four to the floor and a more ferocious syncopated drum pattern. To round things up, there is “Stealth Mode” which is an absolute monster of a track. This tune, alongside some of Scratcha and Maniac’s recent productions, proves that the jump up dubstep brigade really need to look towards the grime producers for tips on how to make an interesting wobble bass.
All in all this is a great EP and definately enough to satisfy someone who is eagerly awaiting the release of “Gremlinz”. Now, go on! Buy this and use it to fulfill all of your wannabe MC fantasies.
ArtistTerror DanjahLabelPlanet MuReleasedAugust 2009GenreDubstepFunkyGrime