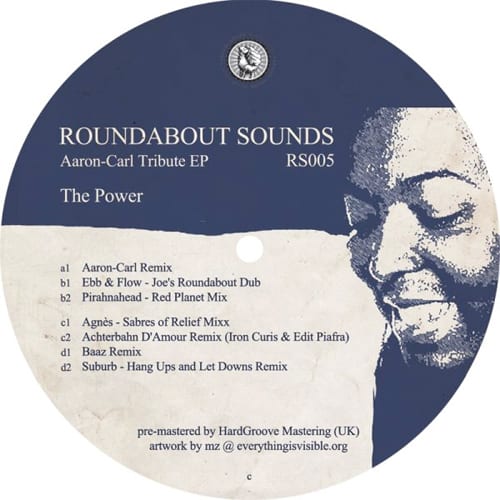 Shortly before he was hospitalized for what was diagnosed as terminal lymphoma, Aaron-Carl, a megalith of Detroit’s tradition of deep house and soulful techno was approached by Joe “Babylon” Marougi of Roundabout Sounds to ask if A-C would be interested in remixing something he had recently produced with Warren Cowley under their Ebb & Flow moniker. The resulting track, “The Power (Aaron-Carl Remix)” became the final piece of a legacy that had crossed labels and genres when Aaron-Carl Ragland suddenly succumbed to his disease in late 2010.

Following Ragland’s passing, Marougi approached a variety of artists to gauge the feasibility of paying tribute to A-C with a double-vinyl release. The artists were sent the same recording of an interview between two women that Aaron-Carl had been given, and were asked to produce original music to back their favourite lines.

The featured remixers cross borders geographical and generic, from A-C and Pirahnahead’s straight-up Detroit roots; to Agnès’ Geneva-based “dubbed-out minimal techno” on his Sthlmaudio Recordings imprint; and from a host of German producers (see Baaz, Suburb, Achterbahn d’Amour, and many modern takes on classic house) to Ebb & Flow of Roundabout Sounds back in California. The tracks featured on The Power are similarly varied, with a prevailing theme of homage to the dedicatee.

A1, suitably, is the Aaron-Carl mix. Smooth and soulful, it’s dominated by full, sleek pads, and indelibly Detroit house percussion. The vocal refrain chosen by A-C – a repetition of the line “hitting G-spots,” which manages surprisingly to surpass its connotations with its rhythmic placement – commemorates a semi-lewd humour that appeared, from his personal blog and this track, to be present until the end. A quivering synth melody tops off the track, while a bleeping bassline flickers along below.

A sure highlight is the Ebb & Flow dub. Its bouncing drum intro is interrupted by a fresh line – “lemme show you what I got” (leading the listener to wonder what exactly the source interview was about) – and lightly plucked guitar is complemented by a minimal electric piano lick. Pirahnahead’s “Red Planet” mix is a balls-out ghetto tech expedition, and may be the most club-happy track on the record. Another contender is Baaz, who adds another notch to his belt of Marianas-deep house, awash with synth stabs and jangling tambourine.

Achterbahn d’Amour explore a type of slow-burning, minimal, deep house, while Agnés, whose output since 2003 is comfortably in excess of twenty releases, favours immediacy with his “Sabres of Relief Mixx” (and a refrain making liberal use of the phrase “penis power”). Finally, the Suburb remix is an outsider, an urgent, bounding track reminiscent of some of A-Cs explorations into “hard-hitting electro-funk.”

Overall, this is a touching tribute, and a strong release. It’s instilled with a warming sense of light-heartedness, a characteristic apparent in Aaron-Carl’s music and public persona. Although his legacy is alive in many forms, from his extensive discography to the work of W.A.R.M.T.H. International, of which he was founder and CEO, devoted to “preserving the integrity of Detroit Electronic Music,” The Power is a touching posthumous release, celebrating many aspects of the late producer’s career.