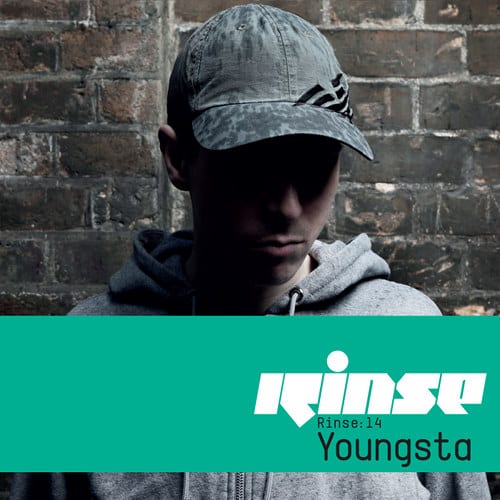 Following a decade of pioneering the sub-heavy, largely instrumental strains of dubstep, including mixing two seminal volumes of Tempa‘s Dubstep Allstars, and hosting the best show on London’s Rinse FM, Youngsta is the sound’s quintessential DJ. As it’s best selector, it’s no surprise that the legend himself was chosen to curate the 14th edition of Rinse’s compilation mix series.

At only 26, it’s a marvel that Yunx has been spinning wax for some thirteen years; and he shows no signs of losing the deft selection and immaculate taste that his offered him exclusive ownership over some of the most sought after dubplates in the world.

Favourites from LX One, Freeze and SP:MC open the mix, with classics that have turned up in practically every’s DJ set since late last year; some in the form of deluxe editions (‘Xylophobia VIP’, ‘Foreseen VIP’). Icicle provides more solid output through the slinky hop of ‘Organic Step’ and alongside Youngsta in the deep space of ‘Momentum’.

Verse, another recent stalwart of this deep, minimal and gnarled sound, brings two blistering unreleased productions to the table, including ‘Venom’ and a gully rework of ‘Wilderness’, by Yunx. Distance’s ‘Mind Control’ is just mind blowing. Other ravemakers such as DJ Madd and Matt-U also feature prominently; as they should.

Youngsta’s unique relationship with the strongest producers of the 140 sound, as well as his impeccable ear to the ground approach, constantly allows him to showcase the best up-to-the-minute tunes going around.

Throughout its 67 minute runtime, Youngsta makes all the right decisions – with turns like DJ Madd’s ‘Secrets’  into Kryptic Minds’ ‘Arcane’ providing a unique and earthcrushing combination. Youngsta’s instinct just knows when to let a riddim roll and when to reel it in.

Rinse: 14 eases in with thick clouds of 140 smoke, peaks through thrusting rides and tumbles into shattering snares; maintaining a bold distinction throughout. By its conclusion, it is utterly heated.

Whilst some may be surprised that Rinse:14 packs less dubs than his previous compilations, Youngsta’s aim here was to provide a compact compendium of subby-dubstep’s whereabouts in 2011, for the masses. It’s also likely that the other plates he’s playing right now just aren’t authorised for publication.

However, it’s clear this compilation promotes a sound best represented in recent times by labels like Osiris Music, Black Box and Wheel and Deal; and serves as a brilliant introduction for latecomers. It’s also a strong communication to veteran listeners that the sound’s nucleus keeps going deeper and deeper.

Even though the genre continues to splinter into countless variants and tear out habitually placates the rabble, it’s still visibly evident that dubstep’s dark, airy core continues to advance. After many years spent exclusively underground, eyes down halfstep is now in the position to reach a much wider audience.

Rinse:14 simply reiterates that Youngsta is still on top of his game, and that experiencing his skills in the flesh should be everyone’s priority.